After long 35 years, the sequel to the Ridley Scott's original Blade Runner has been released finally. It was directed by Denis Villeneuve and cast by Ryan Gosling, Harrison Ford and so on. In this new sequel Blade Runner 2049, it inherits the cyberpunk style of the original Sci-Fi movie as well as adds new Wasteland elements to tell a continued story between humans and Replicants. You may be shocked by unification and reform of the similar characters and plots, visual effects.

As a classic Sci-Fi movie, Blade Runner 2049 extends the humanity theme and brings us more critic thinking about human. Weather reproduction is the the difference between humans and Replicants? Is Replicant more human than humans? Should everything create to be equal? No matter if you have watched the original or not, you should watch this worthy sequel. Now let's look into more details of it. 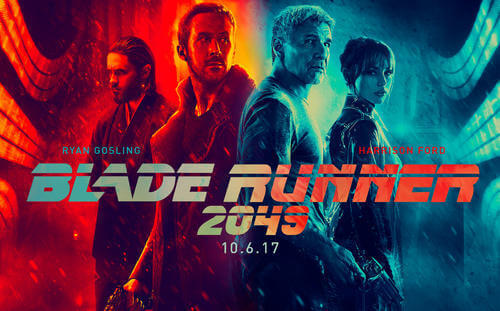 The story happens in 2049. As air quality continues to deteriorate, uncontrolled waste has transformed Los Angeles into an endless pile of rubbish.

A new generation of Blade Runner called K works for the LAPD to chase and retire the outdated Replicant Sapper. After completing the task, K got the bonus to upgrade the virtual lover Joi to a portable type which can take everywhere.

During that task, he found a corpse of the female Replicant Rachael which shows that she had been pregnant and gave birth to a child before. Rachael was in love with another Replicant Deckard. If it is true that Replicants can reproduce by themselves, it will destroy the long established rules and orders of the human government. K was ordered to find and kill the child but he disobey it. Thinking that he was the child, K comes back to the remote place to find more clues. However, because of the black out in 2022, almost all the data about Replicants are lost. K has to find the previous Blade Runner Deckard to find out conspiracy to stop the war between humans and Replicants.

K went on the revenge road and killed Luv and at last took Deckard to meet his daughter. The end.

As a Replicant, K is similar to Deckard. Both are Blade Runner and have their own lovers. The difference is that K is not as lucky as Deckard. But they are only tools of human and victims of the struggle between the human beings and the Replicant. Blade Runner 2049 keeps the essence of the original as well as brings us more new things about human.

Compared to the previous 'Blade Runner', the sequel has a relative slow pace and is more obscure to understand. In order to get better experience of watching Blade Runner 2049, it is recommended to watch the Blade Runner original and the 3 prequel shorts.

Blade Runner original: In 2019, Tyrell invented the Nexus 6 Replicant which is designed to have 4 years life. In request of longer life, the Replicants went back to the earth. As a Blade Runner, Deckard was ordered to retire the wayward Replicants. In the same year. Tyrell creates the new Nexus 7 Rachael. Deckard fall in love with Rachael when try to chase and retire her.

2022 Black Out: In 2020, Tyrell launched new Nexus 8. In 2022, the human government ban the manufacturing of Replicants and massacre them. Replicants revolt by dropping a nuclear bomb over the west coast of the USA, causing almost all Replicant info are lost.

2036 Nexus Dawn: In 2036, the ban was abolished. Wallace acquired Tyrell and create the Nexus 9. They are faithful, younger and more powerful. LAPD employ them as new Blade Runners to retire old model of Replicants.

2048 Nowhere to Run: In 2048, a Nexus 8 Replicant called Sapper helped a mother and her daughter in a conflict, but revealed his identity and trace.

Part 3. Callbacks of the Blade Runner

Blade Runners: In both films, the special officers who specialize in identifying, finding and retiring renegade Replicants are called Blade Runners.

Replicants: They are not actually robots, but artificial people with are implanted with memory. They are using as slave labor etc. by human.

Rick Deckard: He is the previous Blade Runner show up in the original movie. and he is also a central figure in the mystery of sequel Blade Runner 2049. Ford reprises the role again.

Rachael: The lover of the Blade Runner in the first movie. She and Deckard fell in love and escaped from LA together.

Artificial animals: Environmental calamity has ruined the world, resulting endless rains and toxic smog, artificial animals are mentioned a few times in the original and the Blade Runner 2049.

Eyes: There are close-up shots of eyes in the films, but it didn't review whether they belong to humans or Replicants.

Skinjob: It is a derogatory term which is used for Replicants, meaning Replicants look like human but they are actually not.

The original Blade Runner explores the memories and emotions as well as wills of life. Blade Runner 2049 contains this thinking and discusses more topics such as if Replicants are fertile and involves the artificial intelligence. It answers some questions of the previous movie and bring more mysteries for us to explore.

The best reason to watch this sequel is that it helps us it expands our insights about life and forces us think more deeply. There is no eternity in this world, and the only thing human beings can do without doubts is the one that "I" had existed in the world.

Now this fantastic movie is still in theatre starting from October 6th, 2017, you may watch it from your local theatre. If you prefer to watch it at home, iTunes maybe one of the best sources to buy and enjoy movies. To get a better experience in enjoying this movie anywhere or backup it forever, you may use the DRmare M4V Converter for Mac/Win to remove DRM copy protection. The trial version is readily available for both Windows and Mac systems with latest iTunes version. Wanna download it now? Simply click the 'Download' button.