Guardians of the Galaxy Vol.2 has been out for some time and it is the most funny sequel of Marvel movies in years. It continues the adventures of Marvel's motley group of space outlaws with funny roles, nostalgic songs.

But you probably can't image that it is also a great emotional drama. This film focuses on the feelings and relationship between different guardian members to tell a touching story. Although the action scenes are fewer, it digs more deeply about the character or each role and create more resonance for audiences.

The spirit of the film and the memorable personalities make 'Guardians of the Galaxy vol.2' a great, classic sequel. It surely won't disappoint any Marvel fans, movie lovers. Now let's do a quick review to find out the details. 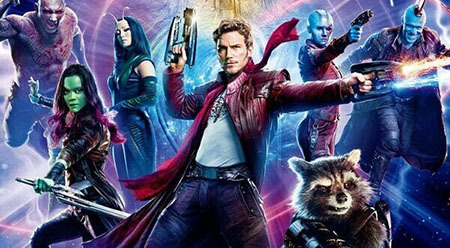 Release: Guardians of the Galaxy Vol.2 premiered in Tokyo on April 10.2017 and Hollywood on April 19 at the Doby Theatre. This film released to international countries like Australia, Italy and New Zealand on April 25 and released on May 5 in North American.

Plot: The guardians are hired by Ayesha, leader of the Sovereign race to protect the valuable batteries. In exchange, she will release Gamora's estranged sister Nebula.

After Rocket steals some of the batteries for himself, the Sovereign attack Guardians' ship with hired forces. Fortunately, the forces are destroyed by Ego, who reveals himself as Quill's faster. Ego Invites Quill, Gamora and Drax to him own planet.

Ego tells Quill that he has been planing to plant seedlings from thousands of worlds which can terraform them into new extensions of himself, but that can only be activated by the power of two Celestials. Quill helps him activate the seedlings which begin to consume the world.

The guardians discover the conspiracy, they finally work together to destroy Ego and help to prevent the world. During the battle, Yondu sacrifices himself to save Quill.

Part 2. Is Guardians of the Galaxy Vol.2 Better than Vol.1

There is no doubt that Marvel fans are going to love both films. As with any other sequel, usually it causes a lot of debates and it is really difficult to tell which one is better. So let's compare both films aspect by aspect. From my part of view, each one has its strong points.

The Visuals: Guardians of the Galaxy Vol.2 is much better than the Vol.1 with a plenty of special effects.

The Characters: The Guardians of Galaxy Franchise franchise has one of the best lineup of characters in the Marvel Cinematic Universe. The the characters of Vol.2 is slightly better the Vol.1's. It add much more newer characters and focuses on the descriptions of feelings. As a result, it is with much more resonance.

The Story: The Vol.2 continues to tell the story of the Galaxy adventure like the Vol.1, but it seems kinds of plain and not as fresh as the Vol.1.

The Comedy: The Vol.1 is a rather perfect funny super hero movie. Vol.2 just contains too much comedy moments but that is just pushed too far which may let audiences fell unnatural.

Part 3. Easter Eggs of the Guardians

Celestials: The Celestials have long been a massive presence in comic books. During the film, Ego reveals himself belongs to the race called the Celestials.

Adam Warlock: Another post scene revealing that Ayesha is creating a perfect being called 'Adam' to wreak revenge on the Guardians.

Stan Lee and the Watchers: Stan Lee has been in Marvel films for years. In the Guardians of the Galaxy Vol.2, director has finally made them make sense by suggesting Lee's appearances are in service to the Watchers.

Howard the duck: It previously appeared in the first Guardians movie and returns in the new film recounting his classic lines while enjoying a drink on Contraxia.

Many-angled ones: It maybe inspired by comic-book monsters that the the Guardians have to battle the tentacled beastie at the beginning of the movie.

Planets: A few of the planets showed on the movie come from the original comic-books such as the Berthert, featured in a 1960s storyline where the Hulk crash-landed there.

The Guardians of Galaxy Vol.2 successfully shaded all the characters like the Rocket, Groot, Drax, Mantis especially the supporting role Yondu who performs the touching relationship of 'Father and Son'. It is all about teamwork and redemption, telling us that the family is not limited to blood but also extend to the bonds and promises you make to people you car about.To conclude, it is still a must-see. Since the movie has been some time after its release, they may not be on cinema any more. We'd suggest you buy the movie online from iTunes, Amazon or any other streaming services.

Speaking of buying movies online, nowadays many vendors add DRM protection to protect the movies. Normally they won't cause problems as long as you play the movies on the compatible devices. However, the copy protection do cause troubles if you want to get the best experience of watching movies everywhere. Take iTunes movies for example, you can only watch them on Apple devices or players. If you really don't want this limitation, you can use DRmare M4V Converter for Mac/Win to help you unlock DRM protection from iTunes videos easily. You may try it out by downloading the free trial version.