Yet if you are a Spotify user and want to play Spotify music on YouTube Music app, you need to know something about transferring Spotify playlists to YouTube Music. How to get it? Just follow our steps. 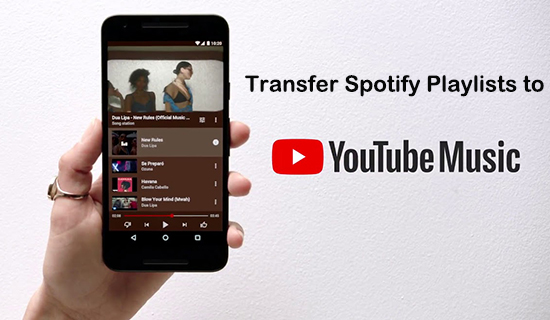 YouTube Music app was launched in 2015. It is available both on Android and iOS platforms. According to the official introduction, the biggest feature of YouTube Music is that the music video can be switched to audio Only, and when browsing other applications, the video can continue to play in the background.

As long as the user selects a song, the application will automatically display a playlist related to the current song, and it can also adjust the subsequent playlist based on the favorite track. If you download the songs for playback whenever you want. You need to pay for the subscription. You are required to pay $9.99 each month.

Part 2. Spotify to YouTube Music Converter - Best Tool for You

No matter you are a free account holder or a subscriber, you can get Spotify played inside the Spotify app. However, you have to charge for better music service from Spotify. Luckily, you have a better way to own the Spotify songs for your online and offline entertainment.

The Spotify tracks are in the format of Ogg Vorbis for its digital rights management. Thus, Spotify music is not available to be played in other apps with YouTube Music included. Actually, the YouTube Music app supports MP3, FLAC, AAC, and other common audio formats. So what you need is a professional Spotify to YouTube Music converter - DRmare Spotify Music Converter. It is well-designed to convert Spotify playlists to what the YouTube Music calls for.

At last, you can convert Ogg Vorbis to MP3, FLAC, AAC, etc. through the DRmare tool. What's more, you are able to preserve the original music information like title, genre, composer, group and so on so that you can easily make a group from the converted Spotify files. Most importantly, The DRmare software pays you back the lossless transferred Spotify tracks while running at a 5X faster speed.

Launch the DRmare Spotify Music Converter after you download and install it on your computer. Open it. The Spotify app will run automatically for your loading songs to the DRmare tool. Log in to your account of Spotify and select what you need to convert. Then drag them to the conversion window directly. Or you can just copy and drop their URL to the search bar of the interface. Click the '+' button. Here you finish your uploading Spotify tracks.

Drop your mouse to the icon called 'Preference' on the top right. You should set it as MP3, FLAC, or AAC for YouTube Music. The DRmare program also permits you to customize the channel, sample rate and bit rate. Setting the conversion speed as 1X faster, you can make the conversion more stable. Moreover, you can archive the output tracks by Artist/Album or Artist according to your needs. Besides, hit the 'Converted' button on the bottom of the window, you can define your favorite output folder.

Now tap on the 'Convert' icon on the right of the bottom. The DRmare Spotify Playlists Downloader will thereby start to convert Spotify files to common audio tracks for YouTube Music. You won't wait for a long time even though you convert files in batch. Finally, you can get the transferred Spotify songs in the output folder you set. Then you can successfully transfer the Spotify Playlists to YouTube Music and enjoy them anytime on YouTube Music.

In all, you can upload downloaded Spotify songs to YouTube Music with the help of the DRmare Spotify Music Converter. The lossless music that the DRmare tool provides enables you to get enjoyment without payment monthly. In all your spare time, you can be immersed in Spotify tracks on YouTube Music anytime. Sounds great!