How to Play iTunes M4V Videos on Amazon Kindle Fire

"I am an iTunes video lover and I usually watch the iTunes movies and TV shows on my Mac at home. Recently I have bought an Amazon Kindle Fire HD tablet for entertainment when I am traveling outside. Is there a way to transfer my purchased and rental iTunes movies to Kindle Fire to play without iTunes player?" - Asked by Savannah Martin.

There are many people have similar requests to convert iTunes movies or TV shows to Amazon Kindle fire so as to watch everywhere when they are on vacation, taking a train or on a plane, etc. Also, some parents may want to transfer the iTunes videos to Kindle Fire for their kids. However, all of them will suffer from the problem that the iTunes DRM-protected episodes are not playable without the iTunes player which is only supported by Apple devices.

Don't worry if you meet the same problem on syncing iTunes movies to Kindle Fire. Here in this article we will discuss about why iTunes videos can't be played on the Kindle Fire while presenting a new solution for you to easily convert and transfer your iTunes DRM-ed movies and episodes to Kindle Fire for watching. 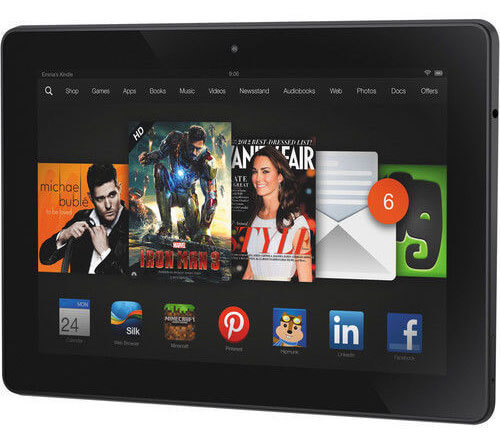 To find out the reason, you'd better learn more about the Kindle Fire first. It is a tablet computer first released in November 2011. Then in 2012 and 2013, new models are released with the name Kindle Fire HD and HDX respectively. Now all these models are discontinued and the latest models on sell are called Fire 7 and Fire HD 8 as well as the related editions for kids.

The Kindle Fire is a second best selling tablet after Apple's iPad. It is specially designed for entertainment with vibrant HD display, powerful processor, long endurance and big internal memory capacity. Also, you can get access to tons of contents like streaming videos and TV shows, eBooks and so on. For instance, you can watch kinds of movies from Amazon instant, Netflix, HBO NOW, Sling TV perfectly except iTunes videos as long as your have a prime membership.

Generally, the reason why iTunes videos can't be played is that Kindle Fire operating system Fire OS is based on Android operating system to develop, which is not in the Apple digital media file ecosystem. In addition, there is no way to authorize the iTunes DRM protected M4V movies and TV shows with Amazon Kindle Fire officially.

So are we completely stuck here? Not really! Fortunately, with the development of the latest video converting and DRM decrypting technology, many software solution providers have developed powerful DRM removal programs for iTunes movies. So removing DRM from iTunes M4V is only a few clicks away.

Here you'll meet the most impressive one, DRmare iTunes to Kindle Fire Converter for Mac/Windows, a multifunctional iTunes DRM cracker that can completely remove DRM from iTunes rentals and purchases and convert the DRM M4V videos to MP4 and other Kindle Fire compatible formats with ease.

Part 2. How to Convert iTunes DRM Videos to Kindle Fire

DRmare M4V to Kindle Fire Converter allows you to convert iTunes movies and TV series to multiple Kindle Fire supported video formats. You can simply add your iTunes videos, choose an output format and click the conversion button to begin. Following is the detailed step by step instruction on how to convert DRM-ed iTunes M4V videos to watch on Kindle Fire:

It is designed to convert the iTunes M4V videos which are authorized to play on the computer, please make sure you have download them completely. Then you can simply drag them from iTunes to our software main screen or you can click the '+' icon from the bottom left side to choose the files in an accurate way.

Kindle Fire supports to play various formats such as H264, MP4, 3GP, VP8, WebM, M4V, etc. without DRM protection. I will recommend you to select MP4(Lossless) or HD MP4 since MP4 works best with Kindle Fire. Accordind to your needs, you can also customize the audio track, subtitle and playback parameters too.

After finishing the output video settings, you can press the 'Convert' button at the bottom right. The software will remove DRM and convert your videos for Kindle Fire quickly at a 30X faster speed which is fastest in the market.

Part 3. How to Transfer the Converted DRM-free iTunes Movies to Kindle Fire

Finally, you will get all the iTunes converted videos without DRM protections. These videos should be able to play on any Android device well including all the Kindle Fire series products like Kindle Fire 7, Kindle Fire HD 8, Kindle Kid's edition and so on. You can follow the quick guide below to upload the DRM-free iTunes videos and watch them on your Kindle Fire devices.

1. Connect your Kindle Fire device to your computer via a micro-USB cable.

2.Your device will appear on the computer explorer in Windows or on the desktop in Mac.

3. Double click the Kindle Fire device to open the folder and then open the internal storage folder.

4. Drag the converted iTunes video files from your computer to the Kindle Fire device.

5. When it is done, you will be able to locate the converted iTunes videos on the 'Photos' content library, you can choose the video you want to play by a player on Kindle Fire.

Notes: If you are transferring videos from an old computer such as OSX 10.5 or Windows XP or below, your Kindle Fire devices won't be detected well after connecting. You will have to download and install a free Android Fire Transfer app online to complete the USB transfers on Mac. Or you can install the Windows Media Player 11 for Windows XP.

Alan Bond is an excellent writer for guiding readers to enjoy iTunes movies and TV shows on Android devices and smart TVs as well as share videos with others online.

Transfer iTunes Movies to Play on Kindle Fire
DRmare uses cookies to ensure you get the best experience on our website. Learn moreGot It!