How to Play iTunes Movies on Sony PlayStation 4

"Recently I have bought a PS4 to play games and watch videos at home. As an iTunes video fan, I wonder to know whether 'iTunes on PS4' is available so that I can play iTunes movies on my PlayStation 4? If so, how? Any comment will be appreciated."

As a home video game console developed by Sony, PS4 has attracted over 50 million game users all over the world. It can not only support to play games but also offer the multimedia features such as Blu-ray and DVD playback, 3D functionality, media player for custom music and video from DLNA server and USB drive and PlayStation Video app for users to rent or buy TV shows and films online.

But iTunes video is an exception so you won't be able to stream iTunes to PS4. Here we will explain why iTunes movies can't be played on PlayStation 4 and show you the alternative solution to do that flawlessly. 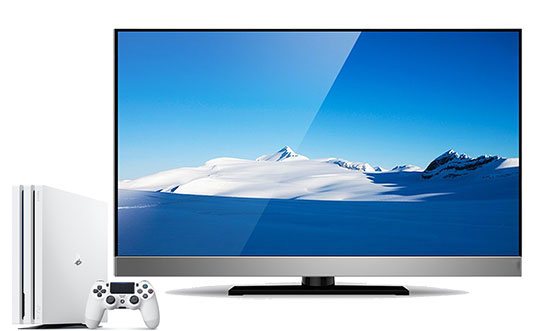 PS4, also called PlayStation 4 is a successor to the PlayStation 3. It has significant upgrade in the processor to improve performance but also increased the social features such as Remote Play, Share Play.

Sony announces two hardware revisions of PlayStation 4 called PS4 Slim and PS4 Pro. Both are improved in the hardware performance further especially the PS4 Pro version which adds the ability to handle 4K game as well as HDR content compatibility to display the media files with much more colorful details.

But like other streaming boxes and devices, there is no built-in iTunes version for PS4 either. So it's impossible to stream iTunes videos to PS4 directly.

Furthermore, iTunes videos are FairPlay DRM locked which limits them from playing on the non-Apple devices. Even if you download and transfer iTunes videos from your computer to the PlayStation 4, they won't play well as expected.

Given the situation above, if you really want to enjoy iTunes movies on PlayStation, the only way to do that is to strip the limitation from the protected videos first. Thankfully, we have found that there are many iTunes M4V converters in the market to help. But please keep in mind that most software use the recording way to get rid of DRM protection which is time-consuming and causes quality loss.

If you care about the image quality very much, you are recommended with DRmare iTunes to PS4 Converter which is a most effective iTunes DRM decryption software. It can quickly break the DRM copyright encryption and directly encode the iTunes M4V videos to a new format at a 30X faster speed. After that, you can stream Apple movies to PS4 with ease. To find out how it actually works, you can give the free trial version a shot as below.

First of all, please make sure you have already downloaded the iTunes movies first. Then you can simply drag the M4V videos from the iTunes folder to the DRmare software screen. Also, you can navigate to the bottom left corner to click the '+' to open a list of the iTunes movies and select the ones you want to convert to load. The software supports to import multiple files at a time.

DRmare iTunes to PS4 Converter is preset with the optimized profile for PlayStation 4, you can go to the 'Devices' tab panel and then find and choose the profile 'PlayStation 4'. By the way, since PS4 also supports MP4, AVI, MKV, MPEG2, AVCHD etc. you can choose other formats you prefer too.

After finishing the settings, you can press the 'Convert' button slightly from the lower right to start applying the settings and converting iTunes M4V movies to Sony PS4. It will remove DRM from iTunes videos and convert them promptly at a 30X faster speed.

Can you get iTunes on PS4 now? When you get the unportected iTunes movies and TV shows, you can start to stream Apple movies to your PS4 to enjoy. No need to connect iTunes to PS4.

There are two highly recommended ways to transfer the iTunes videos to PS4, either with an USB drive or via an DLNA server. Before you do that, please make sure you have connected the PlayStation to a TV or Screen by HDMI cable.

PS4 supports to read files from USB. So you can simply put the DRM free iTunes movies to a USB drive and plug in it. Then you can open your media player from the PS4 home page and choose the video to play directly from the USB or you can transfer from the USB to the PS4 internal hard drive first before playing. It's very easy, so we won't illustrate it in details here.

DLNA , short for Digital Living Network Alliance, was formed by Sony in 2003 with over 250 alliance members. This group's goal is to make it easier for different certified devices to connect together so as to enjoy media files easily. If you have a Windows computer, then it is super easy to set up the DLNA server. By default, Windows computer is integrated with the DLNA server, what you need to do is turn on it.

Open the 'Start' menu > Type in 'Media Streaming' without quotation > You will see the 'Media streaming options' and click it > Click 'Turn on media streaming' > Then all the videos from the video library will be ready to stream > You can go to PS4 to find the video to play easily.

Video Guide: How to Watch iTunes Movies on Sony PS4

You don't need to download iTunes on PS4 but are able to play iTunes purchases and rentals on PS4 by following the above two ways now.