Speaking of Ariana Grande, you may have already hear about her or at least watch her videos or listen to her fantastic music before. She is an American singer, songwriter and actress and she is so popular. In 2010, she start to play the role of Cat Valentine in the series Victorious. After that, she wanted to focus on her music career.

Though she is young only 25 now, she has won a lot of accolades: Six Grammy Award nominations, three American Music Awards, three MTV Europe Music Awards, two MTV Video Music Awards. In 2018, Billboard named her woman of the Year. Ariana Grande also had the honor of playing her tunes for the President and the First Lay at the Women of Soul even in March, 2014 and later at the White House Egg Roll.

Are you touched by the best Ariana Grande songs? Just read this tutorial to find out the details and download them for free. 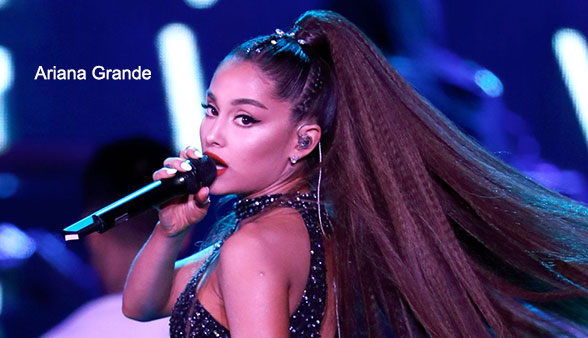 Part 1. Ariana Grande New Music - What We Know about "Thank U, Next"

Ariana Grande always have surprise to her fans. Just a coupon of months after the release of her fourth studio album Sweetener, the 25 years old singer has confirmed to fans that she's been working with her 5th album "Thank U, Next" on Dec. 3th. And she released the same title first single a few hours after that. The song debuted at number one on the Billboard Hot 100 and the song's music video broke records for most-watched music video on YouTube within 24 hours of release.

Ariana Grande's personal life has been in the headlines for most of 2018. In this lead song, Ariana Grande sends out love to her exes including Big Sean, Ricky Alvarez, Pete Davidson, and the late Mac Miller. There is still not an exact release data or intro about this upcoming album yet, but you can find the top 5 things about it below.

1. "Needy" would be the second song of the album according to the post on her social media.

2. Thank U, Next is completely separate from the previous album Sweetener.

3. There maybe 12 songs in total for this new album.

4. No Collaborations On “Thank U, Next", all songs will be created by Ariana Grande herself.

5. Grande has been working on the album for a while now.

Part 2. List Of All Ariana Grande Popular Albums and Songs

Grande has won three number one albums on the US Billboard 200 with Yours Truly, My Everything, Sweetener, one number two album with Dangerous Women. In addition, she earned six top-five singles on the US Billboard Hot 100, including "Problem", "Band Bang", "Break Free", "Side to Side", "No Tears Left to Cry", "Thank U, Next".

In 2014, Grande released her second studio album. It sold 169,000 copies in its first week and became the her second consecutive number one album of Billboard 200. Highly recommended songs are "Problem", Break Free", "Love Me Hard", "Santa Tell Me", "One Last Time". They made Grande become the one who has the most top 10 singles of any artist that year.

The third studio album was released on May 20, 2016. It debuted at number two on the Billboard 200, number one in the UK. It has many beautiful songs "Focus", “Dangerous Woman”. The album and the title track were each nominated for 2017 Grammy Awards.

The album was released on August 17, 2018 with the lead single "No Tears Left to Cry". The sony debuted at number three on the Billboard Hot 100. Ariana Grande became the only artist to have debuted the first single from each of her first four albums in the Hot 100.

You can listen to Ariana Grande best songs from many streaming website such as Deezer, YouTube, Spotify, Google Play, Amazon Unlimited for free with occasional ads or Apple Music with premium membership. Also, you can search and download the lyrics of Ariana Grande music online from the lyrics websites.

But few websites really support free MP3 download. All the main streaming platform all requires you to pay for the membership to download. Though some websites offer free download such as jamixy.com, the music quality is low.

In this case, if you want to download high resolution Ariana Grande music, we'd suggest you use third party MP3 downloaders. DRmare Spotify MP3 Downloader for Windows/Mac is a leading software to extract lossless songs from Spotify platform within a few clicks. It not only guarantees best music quality but also saves you a great amount of time.

There are many auto-generated Ariana Grande players or albums including the latest new music "Thank U, Next" from Spotify. All you need is to search the tracks and then drag & drop to import them from Spotify to DRmare software. You may create and import the new playlist of Ariana Grande you want too.

No matter if you just want to download the songs for distributing or backup, MP3 is undoubted one of the best options. It supports to keep the original high quality of the songs and the size of the files are small. Just click the top menu and then choose "Preferences" to set the output format as MP3.

Finally, please find the big "Convert" button and one click on it to start downloading. DRmare comes with the batch converting feature. Generally, you can click "Convert" button, then all the songs will be downloaded in batch automatically with 5X faster. Honestly to say, this is the most efficient way to download songs from Spotify so far.

Video Tutorial
To learn the tips more quickly, you can also refer to this video tutorial.

By the way, if you want to convert Ariana Grande tracks from Apple Music, you can also use the DRmare Apple Music Converter. The instruction is similar, so I won't illustrate it here. If you have any more questions, please feel free to leave your comments below.