How to Add Spotify to DaVinci Resolve

Many people want to watch videos instead of text and pictures. More likely, they want to create videos of their own with the help of editing software. You might know several top-notch editing apps, but DaVinci Resolve is the best of them you can opt for. It combines editing, visual effects, motion graphics, or color correction features.

In other words, you have your own post-production studio with the DaVinci Resolve app. It is actually available for Windows, Mac, or Linux users and can use its free version with many editing features. This app would be helpful to learn if you are a beginner in editing.

However, adding music to the videos is another cool trend that makes the video more likable. Many editors choose Spotify music tracks to add them as background music. But Spotify songs are encrypted, due to which you are unable to add them directly. You need a third-party tool, DRmare Spotify Music Converter, that converts and downloads the Spotify songs in their original sound quality. In this article, we will introduce the method to put Spotify to DaVinci Resolve by using the DRmare converter.

Part 1. How to Get Spotify Music for DaVinci Resolve - Best Tool

Spotify songs have restrictions. That is why you are not allowed to add them to any app directly. Even if you are a Premium user, you can only listen to them offline. However, DRmare Spotify Music Converter assists its users to convert and download the Spotify music tracks and put them anywhere as they want.

It is the best music converter that converts 50 million Ogg Vorbis songs, albums, playlists, or audiobooks. The DRmare converter rips the protection from the OGG Vorbis files and simply converts them into the local output format. It offers the following extraordinary features.

The converter gives you a wide variety of output formats that will be suitable for your device. You can choose MP3, AAC, FLAC, WAV, M4A, or M4B formats for your Spotify music tracks.

DRmare has up to 5X conversion speed, so you can convert multiple songs at a time, which saves plenty of time. All you need to add music files to the converter, and the rest of the work will be done in minutes.

All the ID3 tags and other metadata, such as title, artist, genre, year, or album, are preserved while converting the music tracks.

It will allow experiencing your favorite music tracks, albums, or playlists on any mobile phone or playback device. You can freely listen to the converted music files offline on the move.

Part 2. How to Convert and Add Spotify to DaVinci Resolve

Step 1Download and Install DRmare Music Converter
To get the Spotify songs on your device, download the DRmare Spotify Music Converter and click the icon to launch it. The Spotify app will load automatically.

Step 2Add the Spotify songs to the DRmare converter

Browse for the desired Spotify songs, playlists, or albums that you want to convert. Choose the required track, then copy the URL to paste it on the search box of DRmare's main interface. You can also drag and drop the music tracks, playlists, or albums to the converter directly.
Note: You don't need to download the Spotify songs on your computer in advance. Just add them to the DRmare converter, and the rest of the work will be done automatically.

When you have added the Spotify songs to the converter, then go to the menu bar and click the 'Preferences' option. A new window will appear where you see the output formats like MP3, AAC, WAV, FLAC, M4A, or M4B and choose the desired one. You are also allowed to edit the output audio parameters like bit rate, sample rate, frame rate, channel, or codec. However, if you have an unstable internet connection, then change the conversion speed to 1X.

Step 4Start the conversion of Spotify songs for DaVinci Resolve

Now you are all set to convert the Spotify music as a local file. Click the 'Convert' option so the conversion process will start. Once it is finished, then you can locate them in the destination folder and transfer them to any device for offline listening.

How to Import the Converted Spotify Music Tracks into DaVinci Resolve 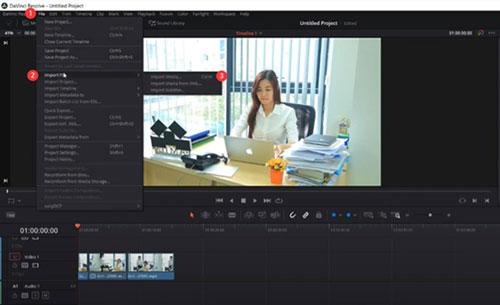 Go to the 'File' and then choose the 'Import File' tab. From there, go to the 'Import Media' to search the Spotify song. After selection, add it to the media box.

Drag the chosen Spotify file and drop it to the timeline. Now you can edit it as you want.

By following the above steps, you can easily add the desired Spotify songs as background music using the DaVinci app.