How to Free Download Shawn Mendes Album 2018 to MP3

Shawn Mendes is a Canadian superstart. He started his career by posting song covers on Vine. He is young but has releasesed 3 studio albums and healined three world tours. And he received many awards and nominations.The lastest album of him is a self-titled album released on May 25, 2018. To promote this album, he is going to embark on his self-titled world tour in 2019.

Do you like his new songs? Personally I am a die-hard fan. Besides listening online, I have managed to backup all the albums of Shawn Mendes offline. And I am going to share how I do that here. Please just read on if you are interested. 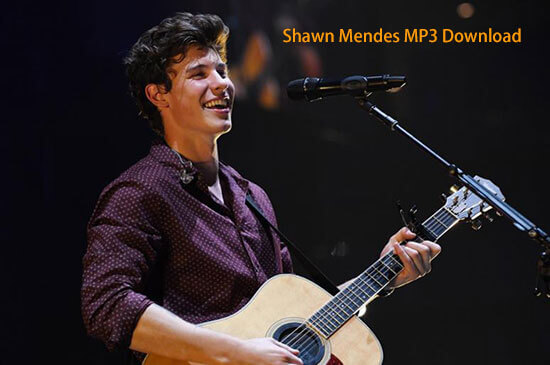 Before we deep into the tips on getting the music of Mendes for free, let's learn a little bit more about him.

What Are the Albums Released

This is the first album of Mendes released in April, 2015. It debuted and peaked at number one on Billboard 200 chart. It has the great Billboard top songs like "Life of the Party", "Something Big", "Stitches", "I know What You Did Last Summer".

Shawn Mendes releasesd him second album Illuminate on September 23, 2016. It also debuted atop the US Billboard 200 and Canadian Albums Chart. The best songs you can't miss are "Treat You Better", "Mercy", "There's Nothing Holdin' Me Back".

The new full album was released on May 25, 2018. It debuted at number one in Candada and also at number one on the US Billboard 200. The best songs are "In My Blood", "Lost in Japan", "Youth", "Where Were You in the Morning".

What Awards He Received

Shawn Mendes focus his life on pop and folk music. He cited John Mayer, Ed Sheeran and Justin Timberlake as his musical influences.

Part 2. How to Listen to Shawn Mendes Songs

The best way to support your beloved star is to buy him albums. If you like Shawn Mendes new album, you can buy it directly from the Amazon or your local stores. You can play the music on your computer or in the car with CD/DVD compatibility. In addition, you can rip them to digital format for backup.

Besides, you can also buy the digital copies from iTunes Store. Apple has gave up DRM protection on the digial music files since 2009. So you won't have any problem to listen to the Shawn Mendes music anywhere.

If you'd like to listen to Shawn Mendes and discover more new music, you can also take a look at the streaming service platforms. Such as Spotify, Google Play Music, Apple Music, Amazon Unlimited.

They offer you the privilege to access millions of songs at only a small amount of fee. It work perfectly as long as you have a solid Internet connection.

Buying CD albums or digital songs could be expensive. Especially if you want to get a lot of songs and playlists. The online streaming music subscripiotn is cheap, but it has the DRM protection. And regaring to streming sources, the subscription fee is recurring. It could end up cost you a lot too if you keep subscribing to it.

Is there a way we can download the Shawn Mendes songs as MP3 for free? Is it legal to do that? The answer is yes. And that is what I am going to share with you.

Here I will take Spotify Music Converter to show you how to download Shawn Mendes on Spotify. That is easy. Let's head into it.

DRmare software work with the free subscription perfectly. You can search and locate the songs and albums you want from Spotify first. Then you just need to drag and drop the playlist to the DRmare software main screen.

The original Shawn Mendes songs from Spotify app are in OGG format with digital rights protection. We'd suggest you to choose the output format as MP3. So that to make sure you can move them to USB drive, SD card, MP3 player or any other mobilde devices for playback,

Step 3Save songs to local computer for free

After that, you can click "Convert" button from the bottom. It will start to encode all the albums you chosed such as the Handwritten, Illuminate, Shawn Mendes. When it is done, you won't have any ads on the songs. Also, you can transfer them elsewhere for playback.

Video Tutorial
Want to learn it in an easier way? Check this video directly.