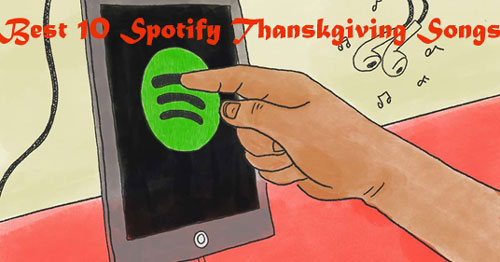 Here we have compiled a list of the top 10 best Thanksgiving songs on Spotify.

1. Give Thanks and Praises

Number 1 song on our list is a beautiful masterpiece by the legendary Bob Marley. This song was released back in 1983. Since then, this blissful and chill song stayed in our life.

Vince Guaraldi for the Charlie Brown Thanksgiving Specials made this soundtrack. If you like Vince Guaraldi's songs in Peanuts shows, this one will not disappoint you.

This song is from the debut album of Frank Ocean called Channel Orange. This track was later nominated for the Record of the Year for Grammy Award in 2013. This explores emotions, such as regret and heartbreak. So, if your food needs a little bit of salt on the day of Thanksgiving, simply add this song to your playlist. It will make you think of someone specific for sure and might even make you cry.

Dinner is a single by Devonte Hynes that was released back in 2011 on terrible records. This song is better known as Blood Orange and one of the best Thanksgiving songs out there.

5. Thank You for Being a Friend

This song was written by the legendry Andrew Gold and then recorded by Cynthia Fee for the "Golden Girls". It is the most famous version to date.

This song is no doubt one of the most enjoyable songs on the list, mainly because it is from Drake. This song, unlike other songs on our list, is about fake friends who have wronged you and no longer get to enjoy the delicious meals with you.

Family Business is a song by Kanye West that was released in the album "The College Dropout". It is Kanye West's tribute to the God-brother of Tarrey Torae. It contains additional vocals from famous singers like Linda Petty, Thomasina Atkins, Beverly McCargo, and many others.

8. Cooking Up Something Good

You can tell when your aunt is cooking up something good, and this song is all about that. The guitar tone of this song is good enough to make you forget about all the negative things that the news has to say.

David Porter and Issac Hayes first wrote this song, and was officially recorded by the legendary Sam and Dave in 1968. Later, ZZ Top Funkily then again covered this classic in their album, Deguello, in 1970.

Step 2: Alter the settings and other parameters

Once you are done importing your music from Spotify, you can alter the format and other parameters. To change the format to MP3, go to settings by going to the "Preference". Once you are in the preferences window, you can change your format to any of the given formats like MP3, AAC, M4A, etc. You can also change the bitrate and sample rate to get the highest possible quality for your songs.

After changing the settings according to your preference, just simply click on the "Convert" button on the bottom corner of the preference window, and it will start downloading. Once it is done downloading, it will automatically be saved in the desired location that you can access later and listen to those songs without being online. As these songs are in MP3 format, you can easily play these songs in any audio device.

We have compiled the list of top 10 best Thanksgiving songs in our article. And now it comes down to your personal preference, which song to choose. Once you decide on good Thanksgiving songs on Spotify, you can use DRmare Spotify Music Converter to download that song. DRmare Spotify Music Converter is no doubt the best tool that allow you to download the music in the highest quality and convert it into any desired format.