How to Watch iTunes M4V Videos on LG Smart TV

LG, headquartered in Seoul, South Korea, is a global leader in the TV industry. In 1996, LG was the first company to bring locally produced television into the Korean market.

As a part of LG Group, LG Electronics developed its first Internet TV in 2007, branded as "Netcast Entertainment Access" that was renamed as LG Smart TV in 2011 with the world's first 84-inch Ultra HD TV introduced. In 2015, LG Electronics launched the world's first HDR-capable 4K OLED TV, followed by the flagship LG SIGNATURE OLED TV. Through continuous innovation and improvement for many years, LG smart TV has evolved a lot from white-and-black devices to OLED TV.

Nowadays, with the unique smart television feature webOS, LG Smart TV enables you to enjoy your entertainment with a series of apps and timely services at your finger tips, controlled via intuitive Magic Romate and a customizable dashboard. Besides, LG Smart TVs are equipped with built-in Wi-Fi, which allows customers to simply access to limitless online content. Beyond all doubt, LG Smart TV is a top-priority way for us to watch favorite shows, surf the web, check out the latest YouTube videos and share everything we like on the large 1080p HE LED screen with family.

Unfortunately, just like other smart TV, LG Smart TV is impossible to play iTunes M4V movies and TV shows directly. In order to make LG Smart TV users better to enjoy their digital life, in this article, you will find some tips on why iTunes movies and TV episodes can't play on LG smart TV and how to transfer iTunes M4V videos to LG Smart TV. 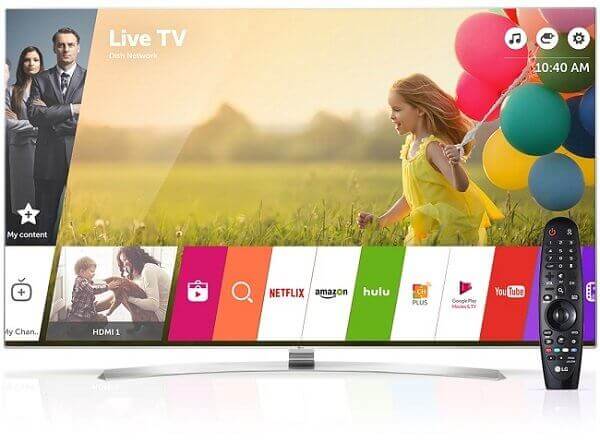 iTunes, one of the biggest online digital stores all over the wrold, provides a large number of popular digital content for users, such as movies, TV shows, audiobooks, music, etc, which adds a lot entertainment to people's lives. But if you are one of the users of iTunes, you might be familiar with Apple’s FairPlay DRM copyright protection that is developed to avoid unlicensed sharing and abuse of iTunes digital media files. As such, iTunes DRM movies and TV episodes are encoded with M4V container format, which are limited to play on authorized Apple devices and players, such as Apple TV, iPhone, iPad, iPod touch and so on. What's worse, we can only authorize up to five computers with iTunes-linked Apple ID. These defective features really restrict iTunes users' right and freedom to enjoy iTunes M4V videos everywhere.

Certainly, if you have an Apple TV, you are able to stream iTunes DRM videos to LG smart TV via Apple TV. If not, you aren't permitted to transfer them to LG Smart TV directly unless removing DRM protection in advance. And then, the primary thing is how to get rid of DRM restriction from iTunes M4V movies and TV shows? Luckily, there are lots of smart third-party softwares in the market for you to decrypt DRM technology from iTunes movies, such as DRmare M4V Converter, TunesKit and Aimersoft DRM Media Converter. Here, I highly recommend DRmare M4V Converter for Mac/Windows due to a simple and beautiful interface and extraordinary performance.

Click the "Add Files" button at the bottom-left corner of the main interface to choose your iTunes M4V videos. Or you can drag and drop these iTunes DRM movies and TV shows that you want to convert to DRmare M4V Converter for Mac directly.

Tap the "Format" option, and it will pop-up a new windows, in which there are multiple formats that are supported by LG Smart TV, such as MP4, MPDG, etc. So you can choose one of these formats as the output format as you like. Besides, you can click the tab near the "Output" option to customize the destination folder to get your converted DRM-free iTunes videos.

After all thing completed, you can click simply the "Convert" button at the bottom left of the main interface. A few minutes later, you can get the common non-DRM iTunes media digital files.