How to Convert iTunes Movies for Playing on Kodi/XBMC Player

As a commonly used Add-on tool for many online streaming websites, Kodi, (or XBMC player) is always the most favorable media player for us to create a home theater system so that we can share and play any media file freely among almost all of our digital devices, such as DVD, internet, TV, etc.

So how about playing movies in iTunes library through Kodi/XBMC player? Well, if you are familiar enough with Kodi, you should know that's not an easy job as there's no iTunes movie channels available on Kodi currently. Don't worry though. Here we'll show you a simple way to get your iTunes movies playable on Kodi/XBMC by doing a few clicks only. 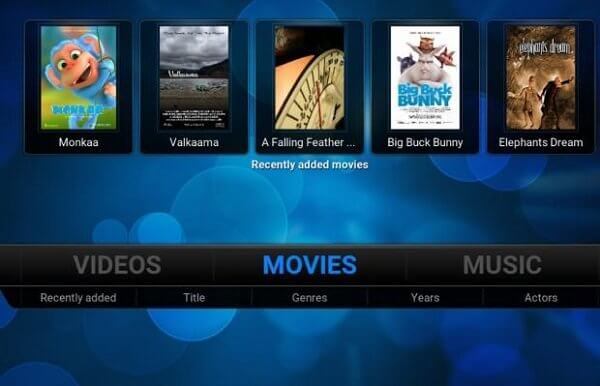 Kodi, (formerly known as XBMC) is a free open-source media player software developed by the XBMC/Kodi Foundation. Kodi player is available for multiple operating systems and hardware platforms, such as Mac, Windows, iOS, Android, allowing users to play and view most streaming media, such as videos, music, podcasts from the internet, like YouTube, Amazon Prime Instant Video, Crackle, Spotify, Rhapsody and Pandora Internet Radio, etc., as well as all common digital media files from local and network storage media thanks to its various plug-ins.

Kodi can be used to play and view all common multimedia formats through its native clients and parsers. It can decode these audio and video formats in software or hardware. Currently Kodi/XBMC media player is fully compatible with MPEG-1, MPEG-2, H.263, MPEG-4 SP and ASP, MPEG-4 AVC (H.264), HuffYUV, Indeo, MJPEG, RealVideo, RMVB, Sorenson, WMV, Cinepak.

You may find that the iTunes movies are not included in the supported list of Kodi player yet, neither of other DRM-protected videos, like movies in Windows Media Player Store, etc. Yes, that's why you can't directly play iTunes movies on Kodi/XBMC media player. But don't be panic. In fact, this problem can be easily fixed by some third-party iTunes DRM removal tools, like DRmare M4V Converter. Since Apple uses DRM protection to limit the iTunes movies to be played on Apple's devices only, we can just remove the DRM protection in order to play the iTunes movies on Kodi or XBMC or other non-Apple platforms. That's what DRmare iTunes M4V to Kodi Converter does. It can help you losslessly get rid of the DRM copyright from rented and purchased iTunes movies and copy the movies to DRM-free MP4, M4V, MOV, AVI and other formats supported by Kodi permanently.

After launching DRmare M4V Converter, you can directly add the iTunes video files via drag-and-drop. Simply drag the movies from iTunes Media folder on your computer and drop the files to the conversion interface. Or you can click the "Add" button at the bottom left of the screen to load the iTunes movies from the pop-up iTunes library.

In this step, you are asked to choose the output format for the Kodi player. Simply click "Format" panel and choose the one that supported by Kodi, such as lossless MP4, HD MPG, etc. from the HD Video column.

Now let's begin to remove DRM and convert the iTunes movies to MP4 or other formats for Kodi player. Once the movies are converted to DRM-free videos, you can easily import those files to your Kodi/XBMC media player for playback.

For more details about playing iTunes M4V movies on Kodi, you can also refer to the following video tutorial: