How to Play Spotify through Winamp

"Can Winamp play music from Spotify?" Probably not. Currently Winamp has not integrated with Spotify yet. It is reported that Winamp 6, which will be released in 2019, will integrate with Spotify and Apple Music. However, until now, there is no new release or further details of the Winamp 6 will look like. 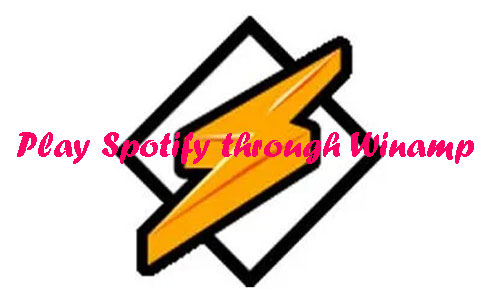 Part 1. What is Winamp

Winamp is a media player for Android, Windows and macOS. It was released in 1997, later sold to AOL in 1999 and then acquired by Radionomy in 2014. Since version 2, Winamp has been sold as freemium and features music visualization, playlist and a media library. In Winamp, you can manage your music tracks and play the music with ease.

Tool You Need to Get Spotify Music for Winamp

As you can't play Spotify on Winamp now, then you need to find a third-party tool to help you. Here you could use the tool DRmare Spotify Music Converter to fix this issue. With it, you can convert Spotify music to the formats that Winamp supported and save them as local files on your computer. Then you can transfer Spotify music to Winamp for playing without any limit.

This tool can batch convert Spotify music to FLAC, AAC, MP3, WAV and other Winamp supported formats with original quality. And it can retain full ID3 tags after the conversion, which lets you manage the Spotify tracks easily.

Now, you may want to know how to get Spotify music to Winamp for playing via the DRmare Spotify Music Converter. Please take it easy. In the following part, we are going to walk you through on how to use DRmare program to convert Spotify music for Winamp. Just follow us and see how to do that as below.

Now, from your computer desktop, please open the DRmare Spotify Music Converter. At the same time, the Spotify app will launch automatically also. Then go to Spotify app to explore songs you like and drag them to the main interface of DRmare program. Or you can also copy the link of the songs and paste them to the search bar in the top of DRmare software. Next, hit on the '+' button to load the Spotify tracks.

Touch on the menu icon from the top right or DRmare program on Windows computer, or click on the 'DRmare Spotify Music Converter' at the top left side of your Mac system, then you will find the place to set the output format for Winamp. Just choose 'Preferences' > 'Convert' to open the setting window, in which you can select the format as MP3, AAC, or other formats compatible with Winamp you like.
If you want a better audio quality, you can reset the bit rate, sample rate, channel, etc. Tap on the 'Converted' icon at the bottom, you can then define your favorite output folder.

Move your mouse on the 'Convert' button and the conversion will start. The duration depends on how many songs you add and your computer performance. After the conversion, the Spotify tracks will be converted and stored to the target folder on your computer. You can locate and check them via the 'Converted' button > 'search' icon.

Part 3. How to Play Spotify on Winamp

With the DRmare Spotify Music Converter, now you had got the Spotify audios offline on your computer for playing on Winamp. Now, let's see how to put and play Spotify through Winamp. 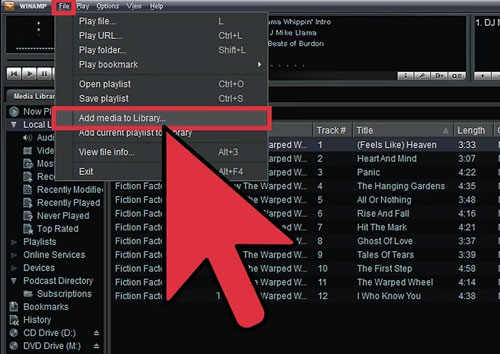 Step 1. Launch the Winamp program on your computer.

Step 2. Hit on the 'File' button on the menu bar and select 'Add media to Library' from the sub-menu.

Step 3. Find and locate the folder that saved the converted Spotify tracks on your computer, then choose and add the Spotify music files you like to Winamp.

After that, you can easily use and play Spotify on Winamp program without any limitation.