How to Play Tidal Music on Fitbit Ionic

Q: Can I listen to Tidal music on Fitbit Ionic? I have a Fitbit Ionic, but as Tidal now is not integrated with it, I wonder if there is any solution that can get Tidal on Fitbit Ionic for listening. Thanks for your help in advance!"

When it comes to Tidal and Fitbit Ionic, you could search for them on the Internet and then you will find that there are many questions of them. For example, Fitbit users will ask when Tidal will be available for Fitbit Ionic on the Fitbit Community. And you will see the answer that Tidal doesn't work for Fitbit Ionic currently.

But please don't worry. In this article, you will find the solution on how to play Tidal music on Fitbit Ionic. Please take a look at this post and see how to make and get Tidal to Fitbit Ionic. 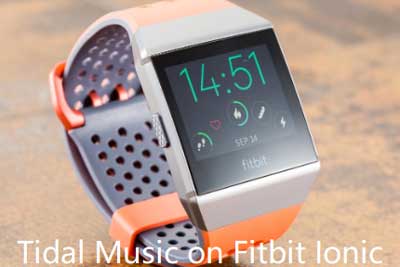 As we had mentioned above, there is no integration of Tidal and Fitbit Ionic. Thus, to use Tidal music on Fitbit Ionic, you need to convert Tidal music to your computer as local files and a third-party tool is needed. Here we would like to introduce the tool DRmare Tidal Music Converter to you.

This smart tool can help rip the protection from Tidal music and let you save them as local files on your computer. It can convert songs, albums, playlists from Tidal to FLAC, MP3, AAC and other audio formats with high quality. Moreover, it can batch convert Tidal audio files at a fast speed, which can save your time and let you have more time to do other things.

Besides, you could also customize the Tidal music files according to your needs, like the sample rate, bit rate, ID3 tags, etc. After converting, you could keep the Tidal audios on your computer and then stream them to your Fitbit Ionic for playback with ease.

Steps to Convert and Listen to Tidal Music on Fitbit Ionic

Now please follow the guidance below to start to convert Tidal music for Fitbit Ionic. But before that, you need to download the DRmare Tidal Music Converter to your computer and make sure that you can listen to Tidal music. Otherwise, you should subscribe to Tidal Premium or try the Tidal trial.

Launch DRmare Tidal Music Converter on your computer and the Tidal app will be opened at the same time. Go to Tidal app and find the music you like to convert for playback on Fitbit Ionic. Then copy and paste the URL of the music tracks to the search box on DRmare program. Next, click on the "+" button to load the Tidal audio tracks to DRmare program. 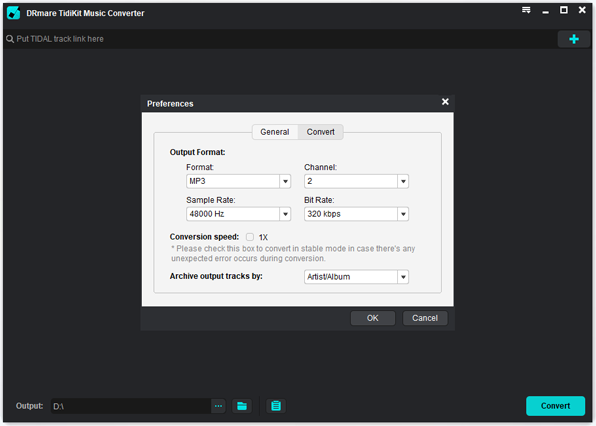 In this step, you could hit on Menu on the top right of DRmare Tidal Music Converter. Then select "Preferences" to open the setting window and click "Convert" to start to adjust the output audio format for Tidal music. In the setting window, you could customize the channel, sample rate, bit rate, etc. according to your requirements. Then hit on the "OK" to save the settings. 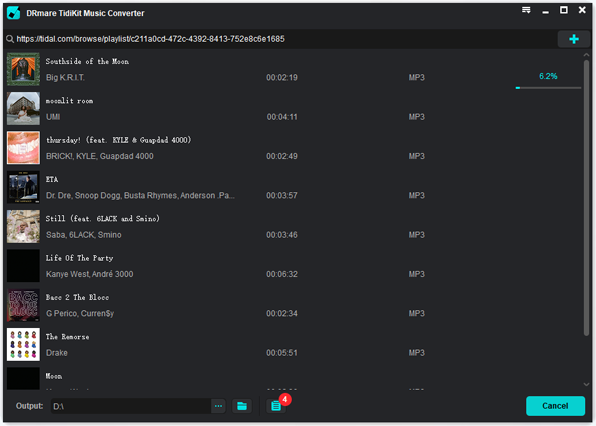 When finished all the settings, then touch on the "Convert" button to begin the conversion. Next, the DRmare program will start to convert all the Tidal music to your computer. In order to locate and check the converted Tidal audios on your computer, please just hit on the "Converted" button and then you will be navigated to the target folder.

Part 2. How to Stream Tidal to Fitbit Ionic

With the help of the DRmare Tidal Music Converter, now you have got the converted Tidal music on your computer. Then you need to stream them to Fitbit Ionic's internal storage via Fitbit desktop app. To learn how to transfer the Tidal music, now please check and follow the detailed steps below.

Step 1. Download and install Fitbit app on your computer.

Step 2. Connect your Fitbit Ionic to your computer with the same Wi-Fi network. Then open Fitbit app and hit on "Manage my Music".

Step 3. Launch the Music app on your Fitbit Ionic and choose "Transfer Music" to add Tidal music to Fitbit app.

(Click to rate this post)
Generally rated 4.9 (243 participated)
Anna Groove is an experienced writer of DRmare. She has the full knowledge of enjoying the audio and video better. Tips for enjoying Tidal music and iTunes videos could be found in her articles.
Related Articles