Can you listen to Apple Music on Fitbit Versa? If you are looking for the answer of this question, this article will help you figure it out.

Fitbit Versa is a smartwatch created by Fitbit, which focuses on tracking your health by recording sleep, heart rate, and other daily activities. Like most mainstream products, Fitbit Versa also offers different kinds of intelligent functions including music playback, payments, smartphone notifications and so forth.

Besides, a distinctive advantage of Fitbit Versa is the battery performance, which can power for four days at most with once charging. That is why Fitbit Versa is the best choice for those who like listening to music on a smartwatch but always forget to charge it. You can import 300 tracks around to Fitbit Versa from Pandora (US) and Deezer (Europe) directly. But for other common music apps, such as Apple Music, you need to find a new path to play Apple Music on Fitbit Versa. 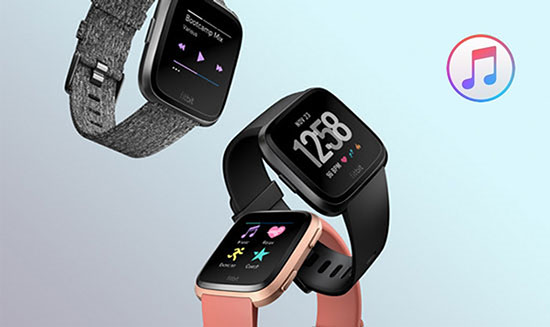 Since few people are willing to subscribe two or more than two music services, this method is suitable for those loyal Apple music fans. To sync Apple Music to Fitbit Versa, you have to download and convert Apple Music songs to local files without protected formats. Hence, what you need is this powerful but delicate tool called DRmare Apple Music Converter, , which devotes to release limits in songs, and convert Apple Music to MP3, AAC, M4A, M4B, FLAC, WAV, and other universal formats.

With perfect audio processing technology, this smart converter works at 30X faster speed to convert an entire Apple Music playlist (no limit on the number of tracks) with keeping 100% original music quality and 100% raw ID3 tags including artists, titles, album, and other related info.

Not only does DRmare support Apple Music songs, but it also allows users to convert and play Audible audiobooks on Fitbit Versa. A huge audiobook file can be auto-split according to its chapters. In a manner of speaking, DRmare Apple Music Converter is an almighty music converter to suit every Apple Music subscriber.

Download DRmare Apple Music Converter on your computer desktop. Click the first 'Add' button in the lower-left corner of the home page. Then you can choose which playlist you would like to convert from your Apple Music library. Or you can directly drag and drop the music files from the Apple Music library to DRmare's empty square on main interface. There is no upper limit on the number of tracks in the playlists.

Once Apple Music audios are loaded into DRmare, hit on the 'audio' tab that is next to the 'Convert' icon. You will be oriented towards Settings page. In there, you can reset the output music options based on your needs. To get the best listening experience, you can choose format to FLAC, sample rate to 48000 Hz, bit rate to 512 kbps.

Now please click to the 'Convert' button to commit conversion. When the process is done, you can follow the on-screen guides to visit the local folder where all unprotected Apple Music songs saved.

With DRmare Apple Music Converter, all Apple music can be downloaded as local files and saved on your computer. Now you can follow the steps below to sync Apple music to Fitbit Versa with few clicks.

Step 1. Make sure that your Fitbit Versa and computer are connected to the same Wi-Fi network.

Step 2. Install Fitbit Connect on your computer. Open and launch it by typing in your account info.

Step 3. Find "Mange My Music" on your computer.

Step 4. Turn to Fitbit Versa. Please open the Music app and hit "Transfer Music". Just wait for a while until your Fitbit Versa connects to the computer.

Step 5. Once the connection is successful, messages will pop out to guide your operation. Please follow the on-screen prompts to direct the local music folder. Then choose which songs you would like to add to Fitbit Versa.

Finally, you are managed to transfer Apple Music to Fitbit Versa watch. Now you can open the Music app on Fitbit Versa to enjoy your favorite Apple music.