How to Move Music from Spotify to Final Cut Pro

Final Cut Pro is a professional video editing software, which allows users to log and transfer videos onto a hard drive including internal or external. In Final Cut Pro, users can edit, process and output their videos to a wide variety of formats. It supports importing video tracks, unlimited audio tracks, 360° video editing and more powerful features.

As for creating videos, the most important element is the background music. And now users may import music from Spotify or other music streaming services in their videos on Final Cut Pro. But can you add Spotify music to Final Cut Pro? Probably not. While doing that, you may find that you failed.

Why? Please take it easy. In the following part, you will find the answer and the solution on how to move music from Spotify to Final Cut Pro. Now let's move on and learn how to do that. 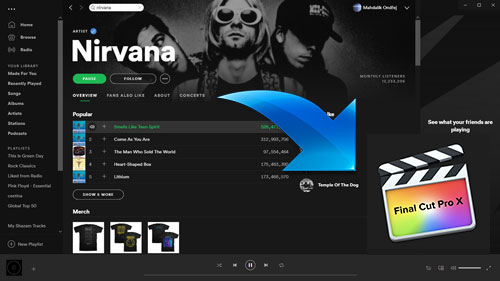 Why can't import Spotify music to Final Cut Pro? The reason is simple. As for Spotify music streaming service, the contents of it are in right protection. That is to say, users can't use their downloaded music on any other devices or platforms directly even though they are Spotify premium users.

Luckily, Final Cut Pro allows user to import music tracks from local music library. Thus, the first step is to download Spotify as local files and rip the protection from it. So to fix this issue, let's meet the solution in the next part.

Part 2. Solutions to Get Spotify to Final Cut Pro

DRmare Spotify Music Converter for Mac is a professional tool designed to download and convert Spotify music. It is an easy-to-use program that just need a few clicks to finish the whole conversion.

With advanced features, you can batch convert and save Spotify music in original quality on your computer. It can convert Spotify music to FLAC, AAC, MP3, WAV and other audio formats that Final Cut Pro supported.

What's more, this tool can keep all ID3 tags of the Spotify music so that you can easily manage your audio files. After then, you can save the Spotify music tracks on your computer and then add them to Final Cut Pro as your video's background music.

After checking the features of DRmare Spotify Music Converter, now you can follow the simple steps to convert Spotify songs as local files and use them in Final Cut Pro.

Download and install DRmare program on your computer first. Then open it and the Spotify app will show up at the same time. Go to the Spotify app to find the tracks you like to convert and use in Final Cut Pro. Then directly drag and drop the tracks to the main screen of DRmare program and it will load them for you. Or you can copy and paste the link of the song and insert the URL to the search bar in DRmare. Then hit on the '+' button to import Spotify songs.

The default format in DRmare program is MP3, you can keep it. If you want other audio formats, you could find the 'Preferences' from the top left of your Mac system. Then you will see the setting window. In here you could change the output format to the one you like. And you can adjust the other audio parameters of your Spotify songs like channel, bit rate and sample rate.

After that, please press on the 'Convert' button and your songs will be converted at once. You could wait for the conversion or let it convert and do other things. When the conversion completes, you could go to the 'Converted' button to see the Spotify files on your computer.

DRmare Audio Capture is an alternative program that can also help you get Spotify to Final Cut Pro. This tool can not only record music from Spotify and other music streaming services, but also can capture audios from video websites, local media players, etc. with high quality and ID3 tags kept. Here you could also download it and try it out to record Spotify music for Final Cut Pro.

Part 3. How to Move Music from Spotify to Final Cut Pro

Step 3. Hit on Music in the Photo and Audio sidebar (If you are on MacOS Mojave, you should click iTunes, not Music). After then, you will see your music contents.

Step 4. Find and add Spotify to Final Cut Pro you like.

Step 5. Touch on the Music show-up menu and tap the Spotify folder to display.