How to Convert iTunes DRM Movies to Nexus 5X/6P

Nexus 5X (made with Huawei) and Nexus 6P (made with LG) are both Google Nexus consumer electronic devices, which have become more and more popular after unveiled in August 2016. Considered as the flagship Android products of Google, Nexus 5X/6P are well known as the lower price and powerful performance for Android users. As a consequence, young people would like to get a Nexus phone on hands instead of iPhone X, which is really expensive to them. If you are the one who switch your taste from iPhone to Nexus 5X/6P, you might meet the same tricky problem as below: 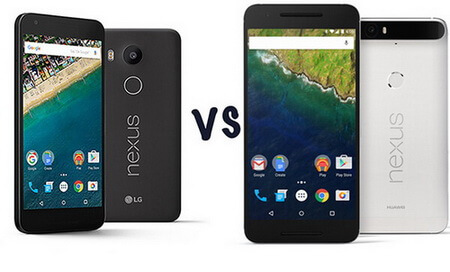 "I'm very happy to get a long-awaited Nexus 6P from my sister. But as an iTunes addict, I get into the dilemma on choosing iTunes movies and TV shows or the new Nexus 6P, since I have no idea about converting iTunes videos to Nexus after trying several times by myself."

Please don't worry any more, since you can get away from this issue. In this article, I will introduce the best solution on how to make iTunes movies and TV shows available in Google Nexus 5X and Nexus 6P.

Featuring with the same software features, including face detection, self-timer, touch to focus, digital zoom, as well as geo tagging, the 5.7-inch Nexus 6P and the 5.0-inch Nexus 5X can support a resolution of 1440*2560 and 1080*1920 pixels respectively. Plus, Nexus 6P configures with 3GB of RAM and 64GB of storage, while Nexus 5X features a smaller system memory with 3GB of RAM and 32GB of storage. Of course, they both have a long-life battery, which allow you to enjoy your video up to 10 hours, especially for Nexus 6P that can support music playback up to 100 hours without any recharging. Fusion of so many perfect and stunning features, most of Phone users prefer to download music and videos to Nexus phones for playback.

Before we talk about the way on how to transfer iTunes movie files to Nexus 6P/5X, you should know the reasons why you can't play iTunes videos on Nexus directly. As we all know that we can purchase, rent, and download movies, TV shows, music videos from iTunes store. But the one thing we should realize is that iTunes purchases and rentals are encrypted by FairPlay DRM technology with encoded in M4V container format for the purpose of protecting copyright and earning more revenue. That's to say, you have no rights to play iTunes purchased and rented files on non-Apple devices. Obviously, Google Nexus series is not in the line of Apple ecosystem.

Hence, if you want to watch iTunes DRM M4V files on Nexus, you should discover a professional iTunes DRM removal tool to strip annoying DRM lock firstly. Here, we'll meet DRmare M4V Converter for Mac/Windows, an all-in-one iTunes DRM cracker. By adopting innovative DRM decryption technology, DRmare M4V Converter enables you to get rid of the shackles of DRM without touching original iTunes files, and convert iTunes DRM M4V to other common formats, such as MOV, MP4, AVI, MKV, MPEG, etc at 30X faster speed. Once you get the DRM-free iTunes digital content with the help of DRmare software, you can play them on any non-Apple devices, such as Android phones, Windows phones and Android smart TVs.

In order to make Nexus users more convenient to enjoy their digital life, especially for watching iTunes movies and TV episodes on Nexus 5X/6P, you can follow the complete guide to remove DRM from iTunes M4V videos and convert DRM-free iTunes files to Nexus phones.

By clicking the "Add Files" at the bottom left corner of the main interface, you can choose the videos from iTunes library directly, since iTunes library can launch automatically. Or you can drag and drop iTunes videos to the main interface of DRmare with ease.
Note: Please make sure that iTunes files you import are protected by DRM technology, DRmare M4V Converter can work well with iTunes DRM-ed files.

When you touch the "Format" tab near the "Add File" option, it will pop up a new windows for you to select the output format. You can enter "Devices" to find the supported devices. Or you can go to the "General Video" to define "MP4" as the output format, since MP4 files can be recognized by Nexus series.

Once all things are OK, you can click the "Convert" tab to start to remove DRM protection and convert iTunes M4V videos to Nexus compatible formats. By the way, this software supports bath conversion. Therefore, you can import all your favorite iTunes videos to DRmare, but the time to convert them is depending on how many iTunes movies you have added. After that, you can convert these unprotected iTunes videos to Nexus 5X or 6P with a USB cable.