For iTunes users, while downloading movies from iTunes Store, you'll may notice that there are always different resolutions available, usually including SD and HD versions for each movie. But do you know what is SD and HD and what's the difference between them?

In specific, SD stands for 480p standard-definition movies, while HD refers to higher-quality movies in either 1080p or 720p. As HD movies present much better video quality than SD with higher resolution, now most people like to choose 1080p, the highest movie quality in iTunes Store.

But by default, iTunes is set to download up to 720p HD movies only. Thus, if you want to get the full HD movies download 1080p from iTunes, then you'll need to make some changes to iTunes settings in advance.

To help you always download iTunes movies in 1080p and know better about the 1080p HD movies sold in iTunes, in this article, we are going to focus on studying 1080p HD movies, including the video quality, compatible devices, as well as solution to download 1080p movies from iTunes Store and convert iTunes 1080p movies to MP4 for playing on any device, etc. 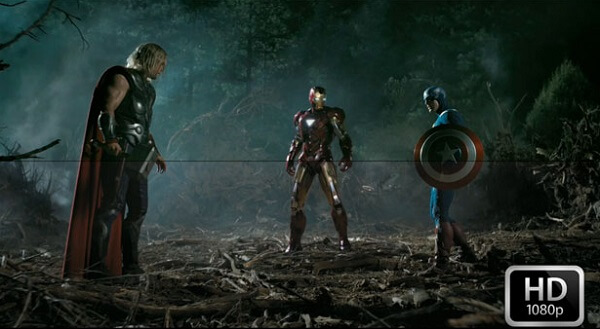 Part 1. Everything You Should Know about iTunes 1080p Movies

You should know that not all devices or computers support playing 1080p HD movies. Before you go for the 1080p movies, make sure your computer or iOS devices are qualified according to the following requirements.

* Windows Requirements to Play iTunes 1080p Movies: 32 or 64-bit version of Windows 7, Windows 8 or Windows 10, iTunes 10.6 or later, 2.4 Ghz Intel Core 2 Duo or faster processor, at least 2 GB of RAM, a video driver that supports HDCP, a display that supports HDCP with a screen resolution of 1280 x 800 or higher with a digital connection (DVI, DisplayPort, or HDMI).

If your devices fully support playing 1080p HD movies, then you can follow the instructions below to see how to set iTunes to download 1080p movies when you buying or renting any movies or TV shows on iTunes.

In the Preferences window, click on Downloads. In the middle section of the window, look for the option titled Download full-sized HD videos. Check the box next to it and click OK to save the change. 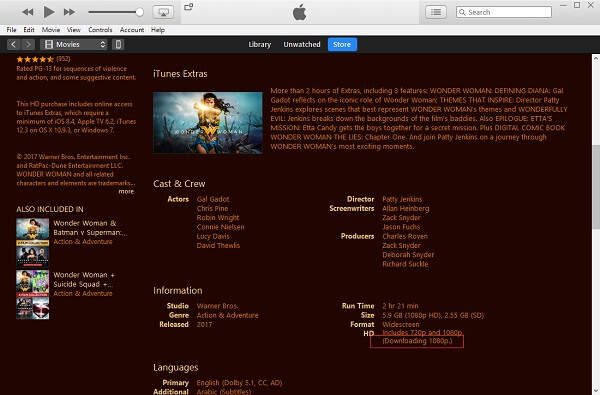 Now your iTunes is set to get full HD movies download 1080p whenever you are buying any movie. You can then go to iTunes movie store and choose any movie you want and start downloading.

Part 3. How to Convert and Download 1080p Movies from iTunes M4V to MP4

If you had downloaded iTunes 1080p movies successfully, there is one thing that you should note. You may know that all iTunes movies, including the 1080p HD videos are being protected, due to which you can only watch the iTunes movies or TV shows on Apple's approved devices. In other words, you can't play or share iTunes videos on Android or other non-Apple platforms. So, what if you want to play iTunes videos on other devices? Is there any way to solve this issue? We are here to tell you that the answer is yes.

Now you can rely on some special iTunes right protection removal software, which can help remove the restriction from iTunes movies and convert the protected iTunes M4V videos to MP4 or other common video formats. Here you can try DRmare iTunes M4V Converter for Windows, a smart and lossless iTunes M4V to MP4 converter that can easily convert 1080p HD iTunes M4V videos to MP4 with original tracks and subtitles kept.

Moreover, you can trim and edit effects for the iTunes videos you would like to convert according to your requirements. After that, you can get the converted iTunes 1080p movies forever and play them on other devices offline.

1080p and 720p are both high definition standards. Although it's hard to tell the difference between them in video quality by eyes, they are not exactly the same. There are some differences between 1080p and 720p HD iTunes movies you should pay attention to.

Since 1080p content has 2.25 times as many pixels as 720p content, it's expected to take up more storage space and will take longer to download than 720p. Specifically speaking, if the file size of an 1080p HD movie on iTunes is 1GB, the 720p version of it would probably be around 700MB only.

You should also know that not all content in iTunes Store is available in the 1080p format. If the 1080p HD is not available for certain movies you want to download, you can only get the 720p movies instead.