"Is there any free M4V converter?" Sure. Here in this post, we will list some free M4V to MP4 converters for you. You could check them out as below. And you can choose the one you like to convert M4V to MP4. Then you can enjoy the converted M4V videos on other devices with ease.

But before learning more about the M4V to MP4 converter free software, we will need to know more about M4V files. And why we need to convert M4V video files for using. At the following post, you can check the details. Let's dive in.

Part 1. What Is M4V and Why We Need a M4V Converter

M4V, short for MPEG-4, is one of the standard formats of video file. It is widely used to store iTunes movies, TV episodes, music videos, etc.

Generally speaking, M4V files could be divided to two different types. They are unprotected M4V files and DRM-ed M4V files. DRM-free M4V files are available for some media players. But various portable devices couldn't support M4V files. Besides, DRM-ed M4V files are only permitted to be playable on Apple-approved devices. While MP4 is a widely-used video format. It can be supported by most devices and platforms.

Thus, if you want to enjoy iTunes videos on other devices, you need to convert protected M4V to MP4 format first. Then, the video files could be recognized by almost all devices and media players.

No 1. HandBrake – Best Free M4V to MP4 Converter for Windows and Mac

When it comes to the free M4V converter, the most excellent software coming up to my mind is HandBrake. Originally developed in 2003, HandBrake is a free and open-source video transcoder. It can transcode videos and audios from nearly any format to other common formats at a faster speed. And it works on Mac, Windows and Linux computer. 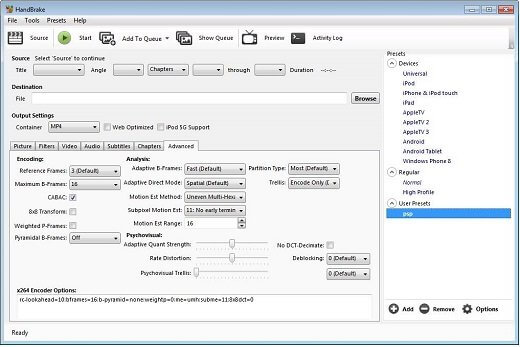 With the help of HandBrake, you are able to get M4V to MP4, MKV, etc. with ease. What's more, it allows users to customize the output videos via "constant quality". With the graphical UI and command-line interface, HandBrake supports batch scan. Due to these functions, it can be regarded as the best M4V to MP4 converter freeware.

How to Use HandBrake to Free Convert M4V to MP4

Step 1. Get HandBrake M4V to MP4 converter free download on your computer.

Step 2. Open HandBrake and drag M4V videos to it.

3. Work on Windows, Mac and Linux.

Any Video Converter Ultimate is an all-in-one video converter. And it is regarded as a free M4V converter for Windows and Mac. It is designed with supporting a large member of input formats. As a smart media converter, it can transfer videos and audios to common formats. 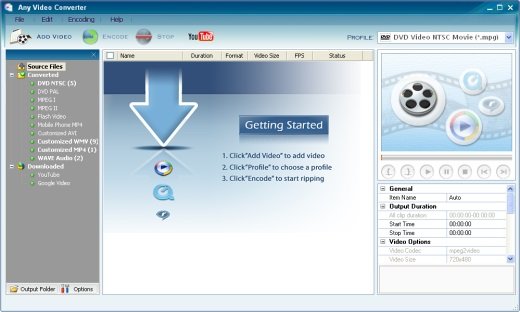 Besides, it is also a free audio CD ripper. You can use it to rip and extract audios from CDs and videos. Also, Any Video Converter can download online videos in clicks on 100+ sites, like YouTube. This makes it differ from other video converters.

How to Use Any Video Converter to Convert M4V to MP4

Step 1. Get AVC M4V to MP4 converter download onto your computer. Then open it.

iTunes videos are encoded with M4V format, and some of them are encrypted with DRM technology. So, if you want to convert iTunes DRM-ed M4V to MP4, you should remove DRM from iTunes M4V videos in advance.

There are various iTunes removal tools to get rid of DRM protection by recoding videos. But this way of stripping DRM restriction may lead into poor output quality. Requiem 4.1 can rip DRM from iTunes videos, etc. with innovated decryption technology.

With this free M4V to MP4 converter, you can convert DRM-ed M4V with ease. And it can convert M4V files to MOV, etc. Wait, don't forget that it's totally free for both Mac and Windows computer.

But it only works well with iTunes 10.7 or lower since it lost its battle with Apple in 2012. Thus, to use this free software to convert M4V to MP4, you have to downgrade and install iTunes to version 10.7 or lower.

How to Use Requiem 4.1 Free M4V to MP4 Converter

Step 2. It will scan your iTunes Library and get the protected iTunes videos for converting.

Step 3. Once converted, it will delete the DRM-ed iTunes video files. And then replace the converted files for them.

Step 4. Find and play the local iTunes video files on your computer.

1. Doesn't work well on some operating systems and have bugs.

PS2PDF is an online and free M4V to MP4 converter. It can not only convert PS to PDF, but also can convert M4V to MP4. Now, check the steps on how to use it. 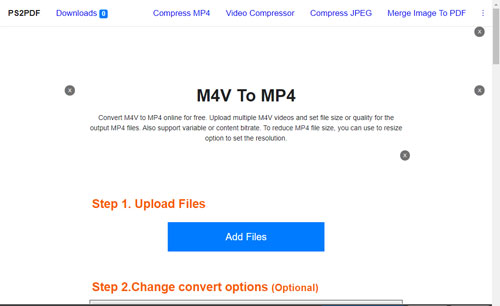 How to Use PS2PDF M4V to MP4 Converter

Step 1. Enter to PS2PDF website and go to the 'Convert M4V to MP4' section.

1. No need to install extra program on computer.

2. Output quality is not high enough.

It is called DRmare M4V to MP4 Converter. It is not a free M4V converter, but it can get rid of DRM losslessly from iTunes videos. And it can convert DRM M4V videos to multiple formats, like MP4, etc. with 30X faster speed. The DRmare M4V to MP4 video converter for Windows and Mac can also convert common M4V video files.

Besides, it can keep the original quality, all audio tracks and subtitles. More importantly, it supports free update and support.

How to Use DRmare M4V Converter

Step 2. Click 'add files' button from bottom left. Then you can add the downloaded iTunes M4V videos to DRmare.

Step 3. Hit 'format' icon from bottom right. Then you can define video format and other parameters as you like.

4. Support to play iTunes videos on other devices offline.

At last, you had learned the best M4V to MP4 converter free software. Now, yu could just choose the one suitable for you. And then you can use it to convert M4V to MP4 for enjoying.

But among those M4V converter free, they are may not the best. Thus, here we would recommend you to try DRmare Music Converter. It can help convert common and protected M4V files with lossless quality. And you can play the video files anywhere and anytime as you want.