The third-generation Motorola Moto 360 has launched in December 2019. Unlike the old models, the latest Moto 360 runs with Wear OS system, equipped with a fully circular display, 1GB of RAM, and 8GB of storage. The speed of charging is one of its highlights. According to the product descriptions, Motorola Moto 360 can go to fully charge from dead within only 1 hour, which is faster than most other competitors in the market.

With the large storage space and quick charge features, Moto 360 is a good portable device for listening to music. However, there also exists some unexpected condition. Just like the following issue.

"I have a Spotify Premium account and Motorola Moto 360. However, Spotify is not working in the offline mode. In the offline mode, I can skip music but I cannot pause nor play. I have uninstalled Spotify and reinstalled it once again. Unfortunately, the play and pause button still not working as it should. Could you please tell me how I can solve this problem. Thank you."

To completely figure out such similar problems, in today's article, I would like to share my latest findings on how to listen to Spotify on Motorola Moto 360 without Spotify Premium. 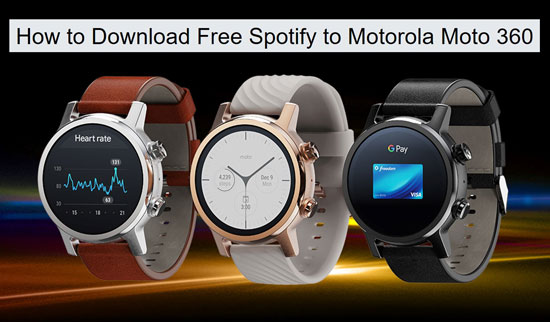 To get Spotify music downloads, the required tool is the DRmare Spotify Music Converter. Customized for both Spotify Free and Spotify Premium users, this smart tool can download and convert Spotify songs to MP3, AAC, M4A, M4B, WAV, FLAC and save them as common audio files on your local storage.

Built-in the latest converting technology, this intelligent software is able to keep 100% lossless sound quality and 100% original ID3 tags from Spotify tracks. In a word, this method is suitable for those who want to download free Spotify on Motorola and those who get trouble with using Spotify Premium on Moto 360.

Part 2. How to Stream Spotify to Motorola Moto 360

Step 1Copy and paste music from Spotify to DRmare

Download and open the DRmare Spotify Music Downloader on your computer. At the same moment, the Spotify desktop app will automatically launch. If you have been using the Spotify app, it will log out and log in at once. Please enter your Spotify library and select the songs or playlists that you would like to import to Motorola 360. Then copy and paste the link of the playlist to the search box in DRmare. Hit the '+' icon on the right to add the Spotify playlist to DRmare. Or directly drag and drop the single song to the empty place of DRmare.
Tip: There is a limitation of 100 songs in one link. Please make sure that each of your playlists contains less than 100 songs. Then you can add several links to DRmare in once conversion.

On the interface of DRmare, open 'Preferences' > 'Convert' under the menu option. If you need to save the same quality as the original Spotify songs, please edit the output settings to MP3, 320 kbps, and 48000 Hz. Or just modify the output format, bitrate, and sample rate depending on your needs.

Press the 'Convert' bar on the bottom right place to start conversion. The software will automatically finish all of the targets. Once the conversion is over, you can hit the folder icon to prompt the local storage folder and check the downloaded Spotify tracks.

Now you can stream the local Spotify files to your phone via a USB cable connection. Connect the phone to your Motorola watch. On your phone, open the default music app to play the added Spotify songs. Then you'll see the current playing music on the Motorola watch. Now you can play, pause, and skip the music by control it on the Moto 360.
Tip: You can also change the default music app. Open the Android Wear app on your phone. Go to the settings > "Device settings" > choose Motorola Moto 360 > Actions > Play music. Then select any other music app that you want to use. The new selection will be the default option for music playback on Android Wear.