"Can you change playback speed on Apple Music?" Apple music is one of the most popular music streaming services around the world. And it offers lots of wonderful features for users to have a better listening experience.

But no worries. There are still some workarounds for you to change playback speed Apple Music. This post will show the best way for you to speed up Apple Music. Also, you will learn how to change speed on Apple Music for audiobooks and podcasts. Let's start now. 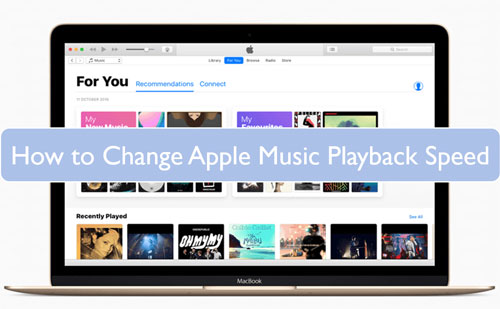 DRmare Audio Converter is a desktop audio converter that can help break the limitations from Apple Music. And it can convert Apple Music to plain audio formats like FLAC, MP3, M4A and more. Besides, it supports changing output audio bit rate, codec, sample rate and so on for your Apple Music songs.

From the desktop of your PC, find and double-click on the icon of DRmare Audio Converter. Then the program will be opened and you will see its clean main screen. Also, the iTunes program will be launched at the same time.
To add Apple Music songs to DRmare program for converting, click on the 'add files' button at the bottom left bar. The first button allows you to import music from iTunes, while the second one lets you add files from your local device. You can choose one of the buttons to add songs from based on where you saved your downloaded Apple Music songs.

To get Apple Music files to plain audio tracks, you need to reset its audio format. Please hit on the 'audio' icon on DRmare Audio Converter. And then it will show a Format Setting window. Here you can alter the output audio format for Apple Music songs. You can choose MP3, FLAC, M4B and more as you want. Also, you can change the audio codec, sample rate, etc. for your Apple Music songs.

Part 2. How to Adjust Playback Speed Apple Music for Audiobooks 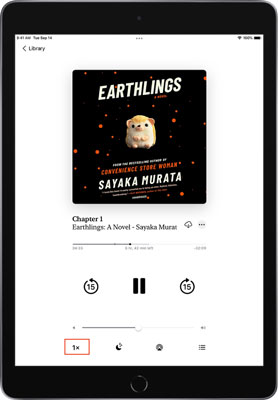 Step 1. Open the Apple Music app on your device.

Step 2. Find and play the audiobooks you like. Then a Player screen will show.

Step 3. Locate and click on the '1x' icon at the bottom bar. Once you hit on it, the Apple Music speed will change to 2x.

Step 4. If you continue to tap the speed icon, it will change to 0.5x speed. When you click on it for the third time, the speed will be back to 1x.

It is easy to change playback speed Apple Music audiobooks, right? If you would like to do that, just follow the steps above.

About the Apple Music speed control, there are some FAQs that you should take a look at in detail.

Q1: Does Apple Music Have a Speed Changer?

A: Yes, there is an Apple Music speed changer. But it is only available for Apple Music audiobooks and podcasts.

Q2: Can You Speed up Songs on Apple Music?

A: Nope, you can't do that in general. Yet, you can use the DRmare Audio Converter for help. With it, you can convert Apple Music songs as plain files and then you can move them to the platforms that support to change playback speed. And then you can speed up Apple Music playback with them.

Q3: How to Change Playback Speed on Apple Music Podcast?

A: You can launch the Podcasts app and play an episode. Then click on the speed icon on the playing screen. Next, you can start to change the playback speed for the Apple Music podcast.