If you don't know how to change playback speed on Spotify podcast, you can follow the steps in the following post. Also, here we will show you how to adjust playback speed for Spotify songs. Please read this post and learn more about how to do that. 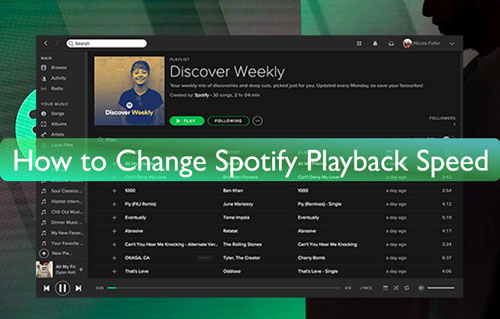 Step 1. Open the Spotify program on your computer.

Step 2. Find and play a podcast you like. Then look for the speed changer option in the now playing page.

Step 3. Now, you can adjust playback on Spotify by changing the speed from 0.5x to 3x as you want. 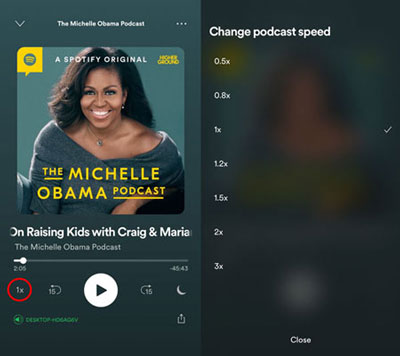 Step 1. Power on your mobile phone. Then launch the Spotify music app.

Step 2. Search for the podcast you like to listen to and then play it.

Step 3. Head to the Now Playing page and then hit on the speed changer icon.

Step 4. At last, you can choose to change Spotify playback speed Android/iPhone for Spotify podcast.

Part 2. How to Change Playback Speed in Spotify Web Player

Step 1. Open the Chrome web browser on your computer.

Step 2. Enter the official page of Spotify Playback Speed Access. And then click on the 'Add to Chrome' button.

Step 3. Launch the Spotify Web Player page on the browser and then log in to your Spotify account.

Step 4. Find the speed changer icon next to the volume. Then you can touch the triangle icon to change Spotify playback speed for your songs.

"Can I adjust Spotify playback speed outside Spotify platform?" Some users want to change playback speed Spotify on other platforms or devices. But you should note that Spotify songs can't be used directly on some platforms. So, here you need a tool to help break the limits from Spotify.

DRmare Spotify Music Converter is a good helper for you to save Spotify music to common audio files. It can convert and download music from Spotify via the tracks' links. And it can output Spotify music as MP3, FLAC and more audio formats.

Besides, this tool can work at a rapid conversion speed. And it will keep the full metadata and original sound quality of the Spotify audio tracks. Also, you can reset the output audio parameters like channel and so on you like.

After getting the local Spotify music with this tool, you can then move them the platform that has a speed changer. And then you can start to play Spotify songs and adjust Spotify playback speed with ease.

Now, let's check out how to convert and download Spotify music as local files by DRmare Spotify Music Converter. And then you will learn how to change the playback speed on Spotify songs anywhere.

Open the DRmare Spotify Music Converter once installed. And then head to the pop-up Spotify app. Here you can find the soundtracks you like to convert from Spotify. Then drag the target track to the main screen of DRmare Music Converter. Or copy the link to the track and paste it to the search bar on DRmare. And then touch the plus icon.

Find the menu icon on DRmare Spotify Music Converter and click on it. Then choose the 'Preferences' option and it will open a new window. In this window, you can start to alter the audio format, and other output parameters. After the settings, click on the 'OK' button to apply.

Touch the 'Convert' button to convert Spotify music. After that, the Spotify songs are downloaded as local files. You can head to the 'history' icon to find them on your computer. At last, you can go on to change Spotify playback speed on your desired platform.