Q: "How to sync Apple Music to Tidal? I have subscribed to Tidal premium plan now for the music of high quality. But I want to copy the playlists from Apple Music and paste to Tidal. Do you have any good idea about it?"

Tidal and Apple Music are two great music apps for music lovers. But actually, you have no way to transfer playlists from Apple Music to Tidal directly. The reason is that the two are not compatible with each other. You need some third-party software to help you. Want to know more about it? Go ahead in this post! 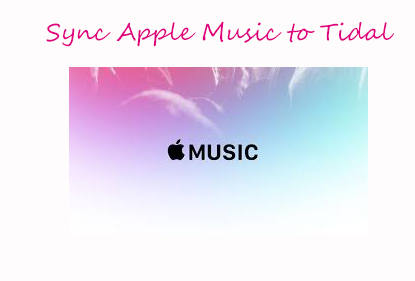 Part 1. Move Playlists from Apple Music to Tidal via Soundiiz

It's exciting if you can find a helper to export Apple Music songs to Tidal. Playlists from Apple Music can be transferred with a powerful tool - Soundiiz. The following is a short guide for you to add Apple Music playlists to Tidal for your playing.

2. Hit the option "Platform to Platform" in the interface.

5. The transfer process will then begin. You can finally get the converted Apple Music files for listening in Tidal.

As I said before, Apple Music and Tidal songs are not compatible. The songs are informed in different formats. So if you intend to listen playlists of Apple Music, you should change their formats to meet the needs of Tidal. DRmare Audio Converter is well-designed to convert Apple Music to MP3, FLAC, WAV, W4A, W4B and AAC files. These converted files can be played in Tidal. Therefore, you can access to Apple Music songs in Tidal freely after you upload them to it.

What's more, the downloads given back by the DRmare Audio Converter are of no quality loss. Also they are saved with ID3 tags preserved. The DRmare Apple Music to Tidal Converter runs at 30X faster speed, so you can get Apple Music playlists forever and play offline in Tidal anytime as you like.

How to import Apple Music playlists to Tidal step by step? Here we offer you the detailed tutorial.

Download and install the DRmare Audio Converter on your computer. Launch it. At the same time, the iTunes app will be also opened. Pick some songs in iTunes app and add them to iTunes library. Click the first button on the conversion window to load the playlists to the interface. Or you can drag them directly to the DRmare window.

Hit the icon on the right of the interface, you can select one of format you like for Tidal. There are also other parameters for you to customize including codec, channel, bit rate and sample rate. Tap on the "Preference" button on the top-right of the window. You can then archive the output files by Album or Artist and reset the output folder.

Drop your mouse on the "Convert" button. The conversion between Apple Music and Tidal will begin. The converted Apple Music songs will be saved with their information such as genre, title, group, composer, album cover and so on. You can locate the Apple Music files in the output folder. You need to know that the converted file you have is a one-third Apple Music track. To gain a whole converted file, you are required to purchase the DRmare Audio Converter.

Now all the Apple Music playlists are on your PC. You just need to do the following operation. Then you can play Apple Music songs in Tidal with ease.

1. Use USB cable to link the iTunes app on your mobile phone with your PC.

2. Copy and paste Apple Music playlists to the Tidal folder.

As you can learn from the above, Soundiiz works well to transfer Apple Music files to Tidal. On the other hand, DRmare Audio Converter is also your good assistant to move playlist from Apple Music to Tidal without the Internet. Moreover, you can get lossless playlists from Apple Music in a short time with the ID3 tags preserved. You can listen to Apple Music songs in Tidal or other apps offline anywhere and anytime. Sounds so great!