How to Play Apple Music on Sony Walkman

Sony Walkman, a portable media player, allows users to enjoy music while they are walking. For office workers and business travelers who expect to enjoy high-quality and pure music, the Sony Walkman will be a perfect choice. Whether on the busy streets or in the narrow cabin, this product provides clear and beautiful sound without raising the volume.

If you like to listen to Apple Music in the days and want to play them on Sony Walkman, you have to find some approaches to fulfill it. How to add music to Sony Walkman from Apple Music? It's not easy to get the solution. But we do! We will show you a good way to transfer Apple Music to the Sony Walkman as follows. 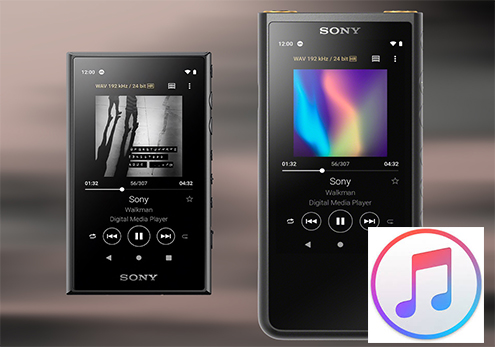 Part 1. Put Apple Music on Sony Walkman - What You Need

Subscribers of Apple Music are allowed to download music for offline. But Apple Music tracks are protected in order to avoid unauthorized sharing and protect the benefits of owners. So, in fact, they have no way to import the music to other apps for playing. Surprisingly, DRmare Audio Converter enables you to own the Apple Music so that you can upload the songs to Sony Walkman.

How does the tool do that? Here is the answer. Apple Music is formed in M4P format which Sony Walkman does not support. Only files whose formats are FLAC, ALAC (Apple Lossless), MP3, M4A, WAV, etc. can be played in Sony Walkman. In conclusion, you'd better change the format of Apple Music that you plan to add to the Sony Walkman. Luckily, DRmare Audio Converter is specialized in the format conversion between M4P to MP3, AAC, M4A, FLAC, etc. You can choose your favorite format for Sony Walkman via the software.

The quality of the converted Apple Music files will not be damaged at all. Besides, all the ID3 tags of the songs are preserved automatically. In addition, as the DRmare Apple Music Converter runs at 30X faster speed, you will get the final files in a coffee time.

Part 2. How to Transfer Apple Music to Sony Walkman

You can freely use Apple Music on Sony Walkman when the conversion ends with the help of DRmare Audio Converter. You can learn how to export Apple Music into the Sony Walkman in the following guide.

Make the DRmare Audio Converter installed in your computer of Windows or Mac system. Launch it. A clear and pleasing interface will be shown to you. Log in to your account of the Apple Music app. Select the songs you want to convert and download them to the Apple Music library.

Then add the songs to the conversion window through hitting the 'Load Library' button on the left side of the interface. Finally. the Apple playlists will be sent to the DRmare Apple Music to Sony Walkman Converter.

Drop your mouse on the top right of the window. Tap on the 'Preference' icon. You can reset the holder for output files and make the output tracks archive by Artist/Album or Artist.

Besides, you can customize the output format from the six ones by clicking the icon on the right side of the bottom. Furthermore, you have the right to personalize the channel, bit rate, sample rate and codec.

Now hit the 'Convert' button and the conversion of Apple tracks will begin. The conversion time depends on how many songs you load to the DRmare tool. What's more, all the ID3 tags such as genre, title, composing, group will be kept in the process. When the conversion is finished, you can locate the output folder to get the converted Apple Music playlists.

Having gained all the Apple Music files on your computer, you can now stream them to the Sony Walkman with a USB cable. We offer you the detailed steps to do it.

1. Make the link between your computer and the Sony Walkman.

2. A device icon on your Windows Explorer will thereby be represented on your computer.

3. Double click the device icon. Then copy the converted Apple playlists and import them to the music folder.

At last, you can play Apple Music in a Sony Walkman without limitation. You can easily divide them into groups as their metadata is saved totally. You will definitely have an amazing experience with the lossless Apple Music in Sony Walkman.