Q: I have received an iPod Nano from my sister, one of the most excellent MP3 players to listen to music. But to my surprise, when I sync downloaded Apple Music to iPod nano, there is an error message in the multi-touch screen stating "Apple Music songs can't be copied to an iPod". If I remember rightly, Apple Music is able to transfer to iPod Touch freely. Why I can't sync Apple Music songs to iPod nano?

As a matter of fact, you are not alone to get such message because many iPod users will meet the same issue when copying Apple Music streams to iPod nano, shuffle, and classic. So, in the following article, I will tell you the detailed reasons why you have no rights to convert Apple Music to iPod MP3 players and introduce an alternative solution to make Apple Music syncable to iPod shuffle and nano.

View also: How to Play Audible Books on iPod 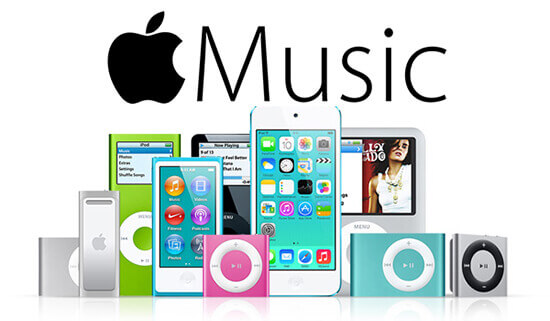 Part 1. Why You Can't Copy Apple Music Songs to iPod 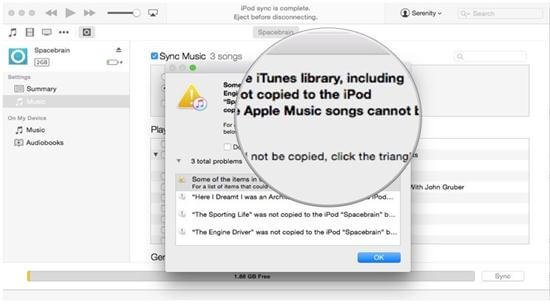 When you get one iPod music player, shuffle or nano on hand, you will find that neither iPod nano nor shuffle have Apple Music application for downloading Apple Music songs. What's worse, there is no WiFi capabilities on iPod, meaning that Apple can't authenticate whether you are one of the subscribers of Apple Music. As consequence, you are not likely to directly access to Apple Music library on nano and shuffle. Perhaps, you would like to do copy&paste action to transfer Apple Music files to them. However, the stuff called FairPlay DRM technology will prevent you from copying music files to nano and shuffle as well as enjoying Apple Music on authorized iPod Touch and other iOS devices.

It's obvious that there is no way to add Apple Music app and WiFi network to iPod Nano and Shuffle. What if you really want to listen to Apple Music songs on iPod nano and shuffle? The alternative solution is to discover an Apple Music DRM removal software to bypass DRM protection from Apple Music and convert DRM M4P files to nano and shuffle compatible formats.

Here, we can meet DRmare Apple Music Converter, an extraordinary and professional DRM cracker, which enables you to get rid of DRM restrictions at 30X faster speed while transferring Apple Music M4P to supported formats by iPod nano and shuffle, like MP3, AAC, M4A and others with zero quality lossless. Thanks to this smart tool, you can not only transfer Apple Music to iPod, but also keep Apple Music on iPod permanently even if you have canceled the subscription.

For the purpose of copying Apple Music songs to iPod, you should prepare the following things: a Mac or Windows computer, an iPod nano, shuffle or classic, the latest Apple Music App or iTunes store, DRmare Apple Music Converter. Once all things are ready, you can refer to the complete guide to sync Apple Music to iPod with no efforts.

Please click the shortcut icon on the desktop to launch Apple Music Converter and the main interface will pop up immediately. Please click the first "Add Files" button at the bottom-left corner, Apple Music library will show up automatically and you can choose favorite Apple Music freely. You can also import Apple Music tracks via dragging&dropping action.

Step 2Set output format and other parameters for iPod

Please touch the "Format" panel to open the new window, in which you can see a list of supported output formats and you can set MP3, M4A or other formats supported by iPod nano and shuffle as the output format. Also you are allowed to customize the output parameters, like bit rate, sample rate, audio codec and channel by clicking the Edit icon.

Once all settings are OK, it's time to convert DRM Apple Music M4P files to unprotected MP3 files by tapping the "Convert" button at the bottom-right corner. Please be patient to wait for the end of conversion process. Generally speaking, it will work at 30X faster speed.
Step 4Transfer non-DRM Apple Music to iPod via iTunes 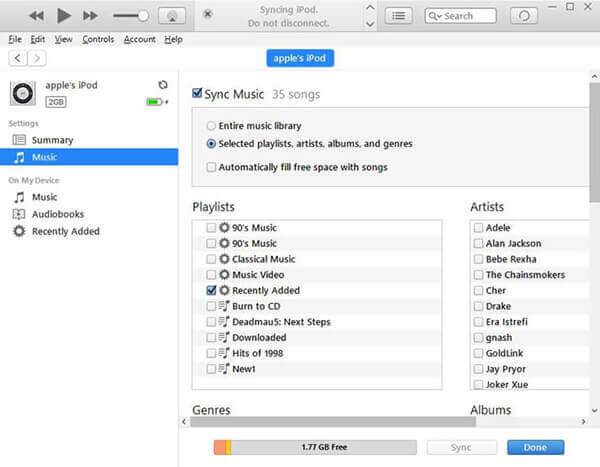 1. When the conversion process finishes, you can locate unprotected Apple Music tracks on destination folder. And then you can import them to iTunes library on your computer by clicking the File->Import File to Library.

3. Choose the "Recently added" menu that included the Apple Music songs you imported to iTunes library from the "Playlists" section.

This part aims to provide some useful information for iPod addict who would like to purchase iPod MP3 player but have no idea about which one to choose, iPod nano or shuffle. The following chart discusses the major differences between the shuffle and the nano.