Spotify Album Cover: How to Show, Change and Create

"Can you change the album cover on Spotify?" The album cover image explains a lot about the song. However, it is well said don't judge a book by its cover. Because many great album songs have unattractive covers. Album covers of songs are a great source of attraction for listeners when they explore or start listening to a new song. Most Spotify users have queries about how to get, see, and change Spotify album cover. Because, sometimes, we get uncomfortable with songs' album covers and want to change them. So, you may wonder 'How do I change my Spotify album cover'. Spotify Premium users can download songs on their computers and then change their covers. While Spotify Free users can't do that.

But no worry. This article will show more information about the Spotify song album cover to you. Also, the common methods for how to show, get and change album cover on Spotify will be introduced. We will also provide free Spotify users with the best third-party software to download Spotify songs. Moreover, you will know how to create Spotify album cover with some art platforms. Just learn more about them now. 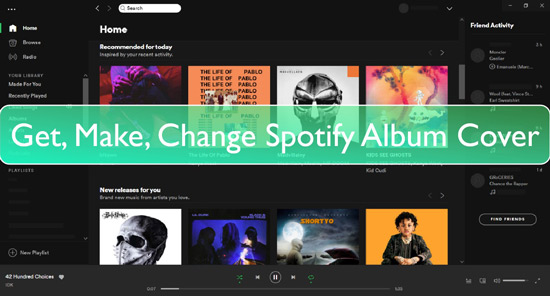 Part 1. Spotify Album Cover: What Is It and Its Size

Part 2. How to Show Album Cover on Spotify

Most Spotify users wonder how to see album cover on Spotify songs. If you want to see the Spotify album cover via mobile app, it will appear in small size. This section will provide methods for showing album covers on Spotify on the mobile app and desktop app.

Step 1. Open Spotify on your mobile device, and navigate the album whose cover you want to see.

Step 3. Choose "View Album" from the options and then click the album art.

Step 4. The "Save to Photos" option will appear, then click on it. You will receive a notification of the "Saved to your photos".

Step 5. The album cover art Spotify is saved in your phone's photo gallery. You can see and show Spotify album cover anytime and anywhere. 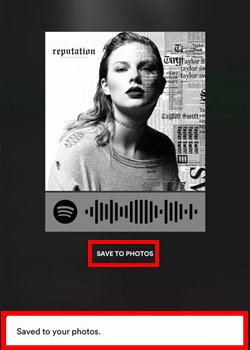 Step 1. Open Spotify on your computer.

Step 2. Choose the album that you want to view the cover art.

Step 3. On the playing screen, the album cover will appear. You can see the cover, but the song's name takes a part of the cover. If you take a screenshot of the cover, it will not look good. 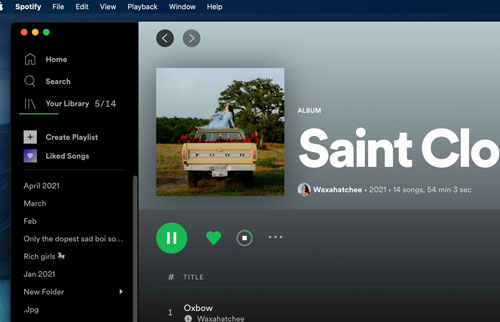 If you want to change album cover Spotify, you need to have that song on your computer first. Otherwise, you cannot change the cover of any album song. Spotify's active Premium subscribers can use their membership to download and edit Spotify songs and even change their covers. But what about Spotify's free users?

DRmare Spotify Music Converter can convert music files into six different audio formats, such as MP3, M4A, M4B, FLAC, AAC, and WAV. The converter does not require any premium subscription to download Spotify songs. So, with a few clicks, you can download Spotify songs on your computer and then change Spotify album covers.

Now, let's learn how to download Spotify songs to computer by DRmare Music Converter. And then you can change Spotify album cover without any limit. Please ensure to install DRmare Spotify Music Converter and the Spotify app on your Mac or PC. Also, check a stable internet connection for effective processing.

Open the DRmare Spotify Music Converter and add songs from the Spotify app. You can copy the song's link and paste it into the search bar at DRmare program or drag and drop the songs into the converter's main interface.

Click the "Menu" icon at the top of the DRmare interface and select "Preferences". And then top the 'Convert' tab in the Preferences window. Then you can change the audio format, bit rate, channel, etc., for the Spotify songs.

To change Spotify song album cover on PC, you can seek help from Groove Music. Now, follow the steps here to learn how to make it.

Step 2. Select "My Music" from the side options.

Step 3. Select "Albums" and right-click a song to choose the "Edit info" option.

Step 4. A pop-up window will appear. Click on the cover image to locate the folder where the album cover is saved.

Step 5. Select an image that you want to set as an album cover and click on "Open".

Step 6. The image will be set as the album's cover. Then click "Save" to save the change. 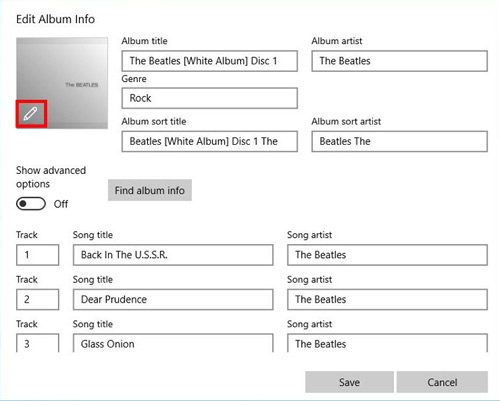 If you use a Mac computer, you can use iTunes program to help change album cover Spotify. Please follow the steps here to start.

Step 2. Add Spotify to iTunes with two possible methods. Locate the songs and drag and drop them in the interface of iTunes or click the "File" option at the top of the iTunes interface to import the downloaded Spotify songs.

Step 3. After adding the songs, right-click an album and click on the "Album info" option.

Step 4. A pop-up window will appear, click on the "Artwork" option and then choose "Add Artwork".

Step 5. Locate the album cover you want to set and select it.

Step 6. Click on "Open" and the album cover will change. Click on OK to confirm the change. 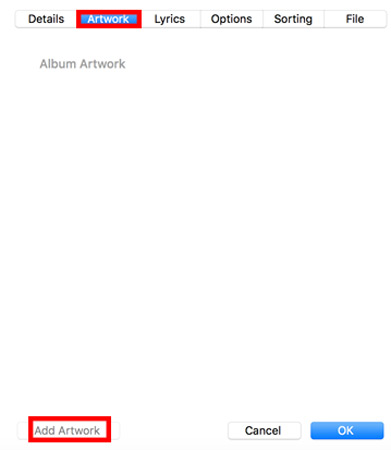 Step 1. Open Coverify and choose a background for the album cover you want to create.

Step 2. Click on "Style" and choose colors, font, and filters for customization.

Step 3. After creating the album cover, save it and upload it on a Spotify song. 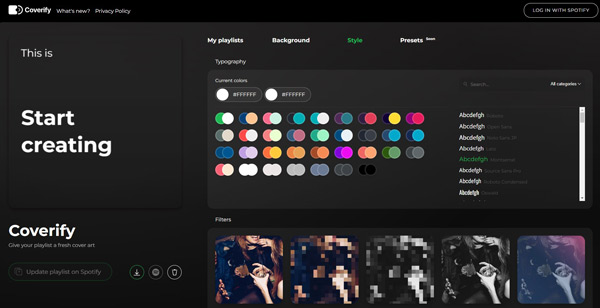 Step 2. Drag and drop the images and customize them by editing colors, and backgrounds, adding text and using other customization options.

Step 3. After creating the album cover, upload it on a Spotify album cover.

Step 2. From a wide variety, select a template.

Step 3. Click "Images" and drag and drop your selected image.

Step 4. You can add text, change colors, and use many other customization options.

Step 5. After creating the design, click on Save. And add it as a Spotify album cover.

Listeners find it attractive to see album covers at the front of a Spotify song. The right artwork gives an exceptional feel and understanding that users feel curious to listen to the song. Meanwhile, if the cover looks dissatisfactory, you can use DRmare Spotify Music Converter to help change Spotify album cover. Try the above-mentioned step-by-step guides to get, change and make an album cover on Spotify songs.