Spotify, a popular music streaming service, has a large music library with more than 60 million tracks. Users can explore nearly all hot hits, classic tracks, albums, etc. in it. And Spotify offers free and premium plans for users. However, due to the DRM protection, Spotify doesn't allow users to keep Spotify tracks as local files no matter which plan you have.

As a result, if you want to download album from Spotify, then you could go ahead on this post. In it, you will get some tips on how to download Spotify album to MP3 and keep them for using forever. 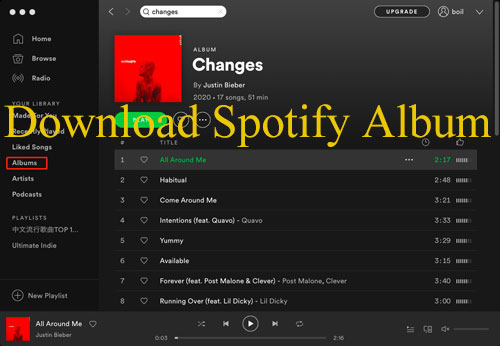 Part 1. How to Get an Album on Spotify with Premium

If you are Spotify premium users, you can download songs, albums and playlists on your computer or mobile device for offline listening. Here we will show you how to download an album on Spotify on computer and Mobile device. Below are the detailed tutorials. 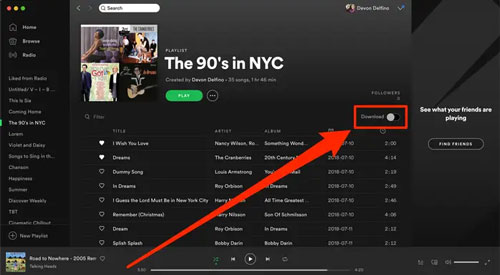 Note: Before get started, please put your favorite songs from the album into a playlist on Spotify in advance, because currently you can't download album from Spotify via Spotify desktop app directly.

Step 1. Launch Spotify app on your Windows or Mac computer.

Step 2. Find and locate the playlist with the album songs you want to downlaod.

Step 3. At the playlist page, please hit on the 'Download' switch to turn it green.

Then you can download album on Spotify on your computer for listening. 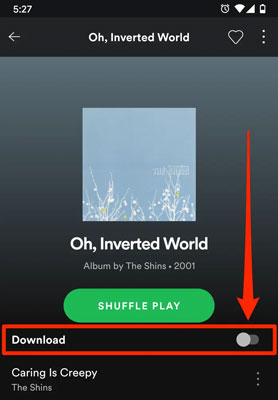 Unlike the Spotify desktop app, the Spotify mobile app allows you to download Spotify album, songs and playlists easily and directly.

Step 1. Open the Spotify app on your Android or iPhone device.

Step 2. Find the album you want to download. You can search for it or open it from the 'Your Library' tab.

Step 3. Touch on the 'Download' switch till it turns green. Then your Spotify album will be downloaded onto your mobile device.

Though Spotify premium users can download album from Spotify on computer and mobile device, however, there are some limitations.

1. The downloaded albums can be only used on the device you downloaded it on, which means you can't move them to other devices for listening.

2. The Spotify desktop app doesn't support to download an album on Spotify.

Thus, is there any better workaround to break these limitations? Sure. In the following part, we are going to introduce a powerful tool to you. Let's move on and have a look at it.

In this part, let's meet the powerful tool for Spotify album download. This tool is DRmare Spotify Album Downloader. It allows both free and premium Spotify users to download album on Spotify without any limitation.

With it, you can easily download Spotify album to MP3 and other plain audio formats, like WAV, FLAC, M4A and more. And it can keep original audio quality and full ID3 tags while running at a faster speed. Besides, you are able to reset the bit rate, channel, sample rate, etc. of Spotify album as you like.

After then, you can successfully download an album on Spotify via DRmare Spotify Music Converter and enjoy the Spotify albums anywhere and anytime.

DRmare Spotify Album Converter is easy to use. You can directly download and install it on your Windows or Mac computer. After then, you can refer to the steps below to download Spotify album to MP3 for playing.

Please launch DRmare Spotify Album Downloader, then you will notice that the Spotify app is also opened. Then find the Spotify album you'd like to download. Next, copy & paste the URL of the album to the search bar on DRmare program as well as hit on '+' button. Alternatively, you can drag and drop the link of the album to DRmare main interface.

To launch the setting mode, the operation process is quite different according to different operating systems. For Mac, please touch on the 'DRmare Spotify Music Converter for Mac' from the top-left corner to choose 'Preferences' > 'Convert' button. For Windows, please hit on the top-right menu to select 'Preferences' > 'Convert' tab. After then, you can set the audio format as MP3 for Spotify album and customize other audio parameters, like sample rate, bit rate, etc.

To start the converting process, please press on the 'Convert' button at the main screen. The real-time converting progress will show on the cover. Once done, you can locate Spotify album MP3 files by hitting the 'Converted' icon.

According to the tutorial above, you can choose one suitable way to listen to Spotify music offline. One is to use Spotify premium plan, then other is to use DRmare Spotify Album Downloader.

If you don't want to install an extra app on your computer, then you can get a Spotify premium subscription. But there will be some limitations and it costs you more. If you want to save money, then you could go to DRmare Spotify Music Converter. It is the best tool for you to download any content from Spotify and listen to them offline anywhere and anytime.

If you are interested in DRmare program, then you can install the free trial version and have a try of it.