As one of the biggest music streaming services, Spotify provides millions of songs to explore. And it has been more and more popular among music lovers. On Spotify, you can find almost all favorite songs and discover new music.

Yet, if the network speed is unstable, you will get a poor listening experience. So, the best way is to record Spotify music for offline listening. There are many Spotify recorders in the market to help. But, which one is the best Spotify recorder?

Here, we list top 13 Spotify recorder to help you choose the right one. They are for Windows, Mac, Android, online, and free. Just dive in with us and learn more. 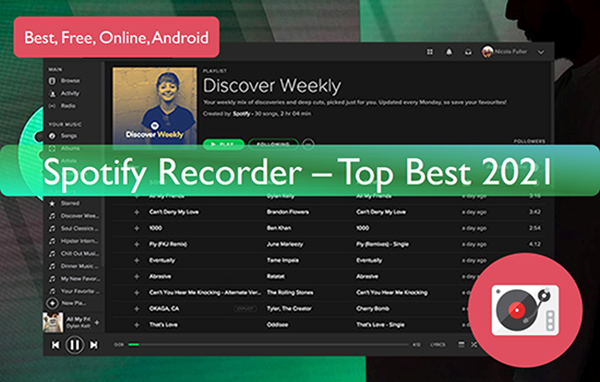 As for the best Spotify music recorder, DRmare Spotify Music Converter takes the throne. That's because it has overall features and performance. The screen is so clean and beautiful, you won't be confused with any bells and rings.

Also, it is easy to customize the bit rate, channel and sample rate. And you can archive output files by album/artist. The stunning feature of this smart tool is its conversion speed. Different from the traditional Spotify recorder, it runs at up to 5X faster speed. At the same time, it keeps original quality including all the ID3 tags like the album, artist, and so on.

And you don't need to sign up for Spotify premium membership to use it. Though it is not free, it saves you a lot of time and energy. If you care about your time and the music quality, you should definitely take a look at it. 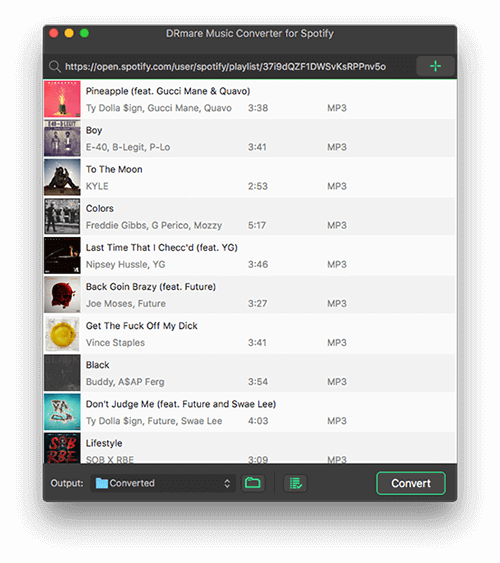 * Don't work for other streaming music services, such as Tidal, Pandora
* Not free

How to Use DRmare Spotify Music Converter

Cinch Audio Recorder (CAR) is an all-in-one streaming music recorder. It can record songs from many audio sites with the accuracy of ID3 tags kept. There is no doubt that Spotify is one of the supported streaming music services. Thus, it's also a Cinch Spotify Recorder.

It's not a free Spotify recorder, but it has much more features than free recording programs. It combines two audio recording processing cores to analyze and cut out the noise during recording. Also, it has useful features to block Spotify ads and make Spotify songs as ringtones. 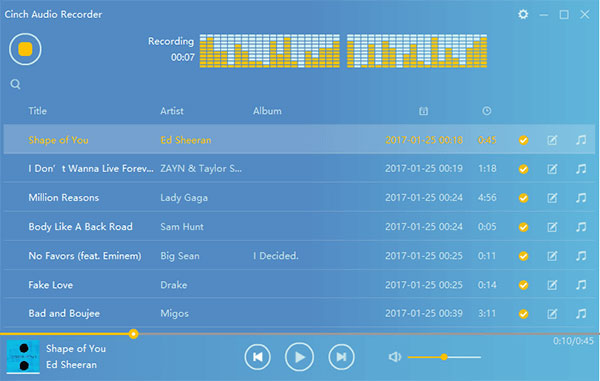 How to Use Cinch Spotify Audio Recorder

Replay Music is also a Spotify recorder Windows. It can capture songs playing on your PC to high-quality MP3 files. It works with video, audio websites like Spotify, YouTube, or local players. So, you can use Replay Music to preserve high-quality Spotify files.

During recording, each Spotify song will be tagged with the artist, album, and any other info. Besides, it can split Spotify tracks into small clips and burn Spotify to CDs. Also, it supports previewing and playing tracks.

However, it is not perfect either. During our testing, it is not so stable, sometimes it just closes without any reason. Similarly, it also costs $29.95. 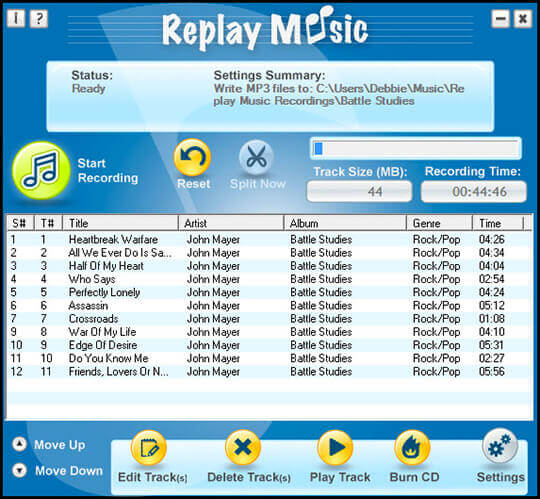 * Keep the original high-quality songs with this Spotify recording software
* It combines the features to split your music, burn CDs
* Extract audio tracks from videos

* It is not stable, sometimes it crashes without reasons
* It takes real time to download Spotify music
* It costs $29.95 to get the paid version
* No built-in music player
* Only for Windows OS
* Not work on all web browsers

How to Use Replay Music Recorder for Spotify

Audials Music 2021 is a quite professional Spotify recorder. It is also an audio format converter and a music manager. You can use it to record and keep online audio files to MP3 and so on. Besides, it can download and convert audiobooks to MP3 at a fast speed. Also, it can help manage multiple music collections with ease. 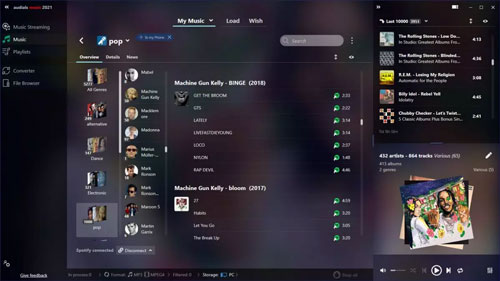 * Only available for Windows OS
* Cost a lot

For Mac users, Wondershare AllMyMusic is the best Spotify recorder Mac for you. It is an audio recorder to record any audio tracks that plays on your computer. It can support to capture audios from Spotify, and more other online sources. 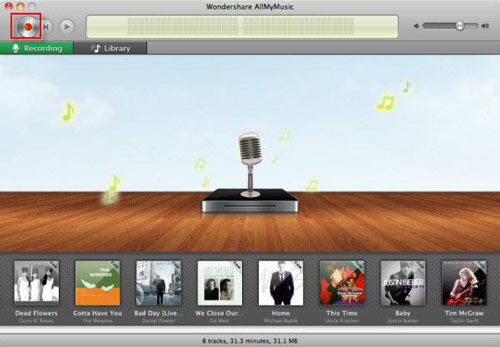 How to Use Wondershare AllMyMusic

Leawo Music Recorder can be also used as a Spotify recorder. It can record audio files on Windows and Mac computer. And it can help manage recorded audio files and edit the files with ease. 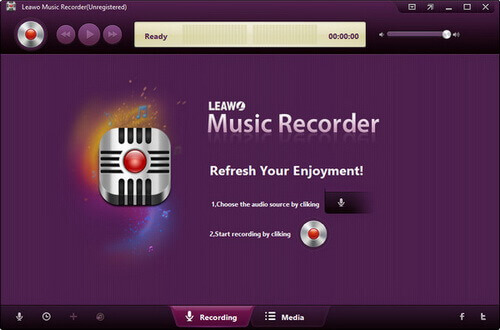 How to Use Leawo Music Recorder

Apowersoft Streaming Audio Recorder can record streaming music tracks from all sources. It can also capture the sounds from audio chats easily. It supports to output audio files to MP3, FLAC and more audio formats. With it, you can keep the audio files for play on any platform. 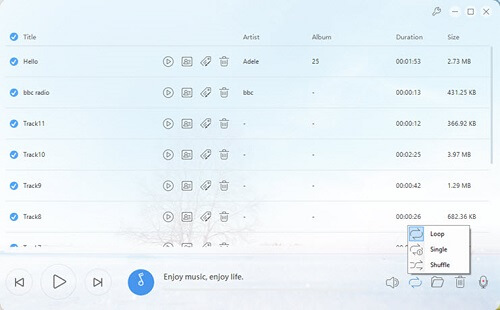 How to Use Apowersoft Streaming Audio Recorder

When I research Spotify recorder, I found that many Spotify users also want to get a Spotify recorder Android. With the advent of the digital age, there are more and more people who use mobile phones. Android phones account for a large portion of the market share.

As a consequence, many people use Android phones to explore digital entertainment. Also, it includes listening to Spotify music on Android phones. Then, let's get back to the key topic. Is there a smart Android Spotify recorder? It could be better to record from Spotify Android instead of syncing them from computer.

Syncios Audio Recorder is the answer here. It lets you record audio from Spotify Android.

* The only Spotify recorder Android to record Spotify music

* It runs at a 1X conversion speed

How to Record Spotify on Android via Syncios Audio Recorder

Dojotech Spotify Recorder is a very simple Spotify recorder free. It can detect the tracks when Spotify is playing and save Spotify songs to MP3. Besides, it can tag the downloaded songs with the genre, album, and other info.

It also allows you to change the record folder, choose a recording device, and so forth. Unfortunately, only Windows XP and lower versions are supported. Unless you have an old Windows computer, this software might be of no use to you.

Anyway, it does offer a good solution for users with a free Spotify account to extract music from Spotify. With an old PC, it's a nice choice to download Dojotech Spotify Recorder. It helps you play Spotify music offline at no cost. 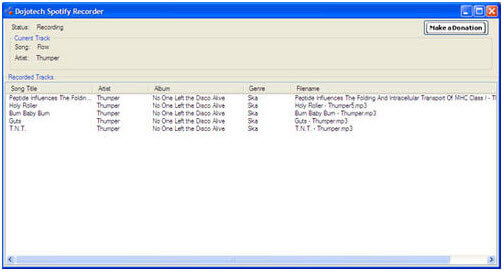 * The user interface is too simple

Audacity is originally known as a powerful and free audio recorder and editor. It's similar to Cinch Audio Recorder but more powerful than it. First, it runs on almost any platform, like Linux, Mac, and Windows OS. Then, it supports recording live audio through a microphone or mixer. Of course, it can digitize recordings from other media services like Spotify for free. Here, we will focus on the Spotify option.

With the audio wave display window, you can control Spotify recording in a better and easier way. After recording, you can trim, cut, and rearrange the Spotify tracks. With this free Spotify music recorder, you can record and convert Spotify to MP3, WAV, AIFF, or AAC.

But, it's also worth mentioning that the audio quality may be affected. You may hear some noise on the Spotify. If you accept this disadvantage, it could be the best free Spotify recorder 2021. 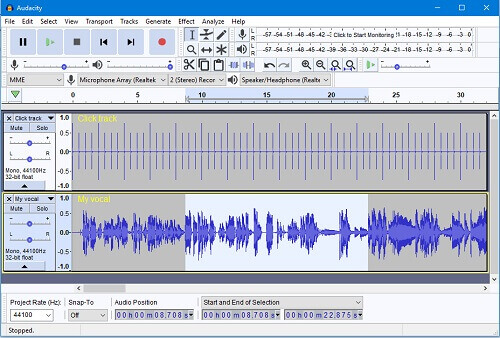 Codeplex Spotify Recorder is probably the simplest Spotify ripper. It is developed by a person for converting Spotify songs for personal use.

You can one-click to record Spotify tracks directly from the sound card. It will add the artist info automatically. Like DRmare Spotify Music Converter, it doesn't need a premium Spotify account to do that.

Just play your Spotify songs. Then click "Start Recording" button, it will begin to record Spotify files. According to our test, it works perfectly on Windows 32/64 bit system.

Yet, it hasn't been updated for about 2 years. So, it may not be compatible with the latest Windows 10 system. As a free Spotify audio recorder, it is still eligible to be ranked in this article. 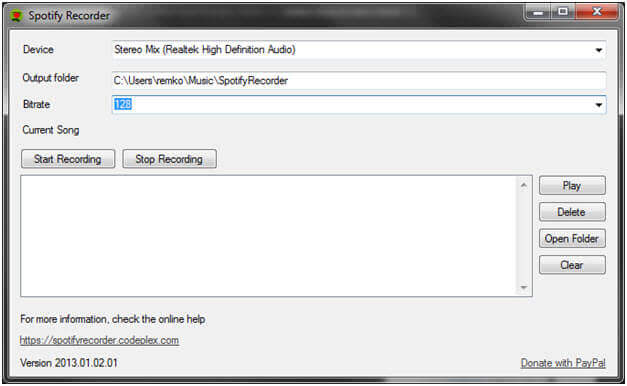 * It's a freeware with a simplified interface, you don't have to be tech-savvy to use it
* Keep the ID 3 tag info such as title, artist, and so on

* Don't work on Windows 8/10 and other kinds of computers
* Few tutorials, documentation, or support is available online

Free Sound Recorder is a free Spotify recording software. It also can be used to record other sounds for free. You can set the recording time with a duration to record audio tracks.

With it, you can record Spotify to other audio formats with high audio quality. Also, this tool allows you to edit the recorded audio files. You can cut and trim the audio tracks you want. 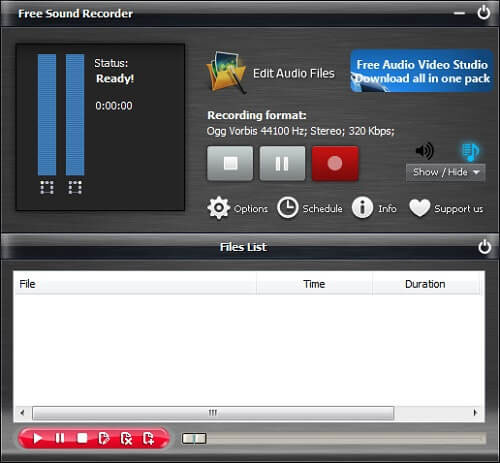 * Easy to use
* Capture sound from sound card on computer

Here we will show a Spotify web recorder for you to record Spotify music without installing extra apps.

Spotify Deezer Music Downloader is one of the professional Spotify web recorders. It is a Chrome extension to download music from Spotify Web Player. You can find this online Spotify recorder on Google and add it to your Chrome browser.

After that, when you open it, it will bring you into the Spotify Web Player. When you tap the item that you'd like to record, it will show a 'Download' option for each file. It's simple to use it to listen to Spotify music offline. But as a web tool, the conversion process isn't stable and the output quality could be lower. 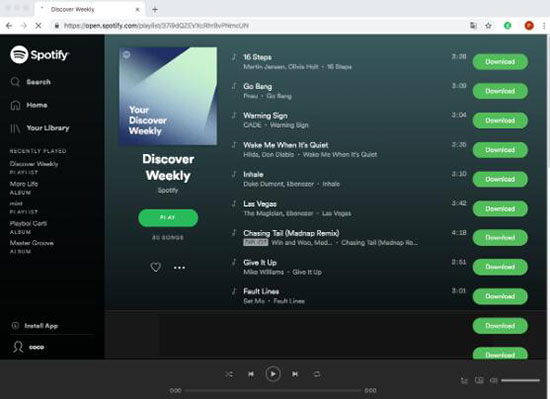 Which Is the Best Spotify Recorder

We had listed 13 best Spotify recorder above. You can select one from them to record music from Spotify.

To get the best quality and the highest converting speed, you can choose DRmare Spotify Music Converter.

If you want a free Spotify recorder, you can try Dojotech, Audacity, Codeplex and Free Sound Recorder.