How to Use Pacemaker Spotify Offline

"Does Pacemaker work with Spotify Premium playlist?" Yes. Pacemaker is an easy-to-use DJ app. And it allows users to access millions of tracks and sync music from Spotify and Apple Music library. As Pacemaker Spotify has been integrated, you can easily use Spotify with Pacemaker DJ.

Now, in this post, we will show you how to use Spotify Pacemaker with Premium. Also, we will introduce another way to help you connect Pacemaker Spotify offline. Here let's go on and find out more detail. 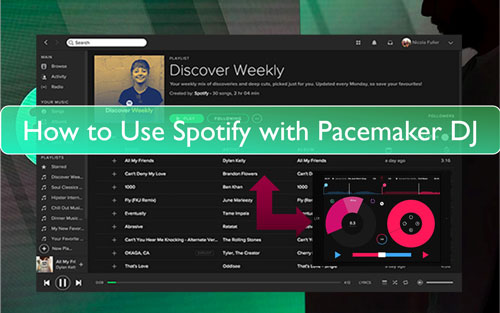 Part 1. How to Connect Spotify with Pacemaker with Spotify Premium

Pacemaker and Spotify has integrated together. So, you can search on Spotify and then mix the Spotify music with Pacemaker. Yet, this feature is only available for Spotify Premium users.

To use Pacemaker Spotify Premium, you can go to Pacemaker DJ app. Then find and play the Spotify songs you want. And the Pacemaker will detect and analyze the audio tracks you play. Then you will get the 'Sync' button. You can then hit on this button to sync the Spotify music you want to play and mix on Pacemaker.

With the Pacemaker Spotify playlist, you can add the effects on it as you want. Moreover, you can use multiple effects at the same time. At last, you will get the wonderful Spotify Pacemaker mix soundtrack.

Part 2. How to Use Spotify Pacemaker Offline without Premium

What if you don't have a Spotify Premium and how do you use Pacemaker DJ app Spotify? Or, when you meet the issue that 'Pacemaker app not connecting to Spotify', what can you do? Please don't worry. For such issue, here we will provide the best solution for you.

Here let's meet with the DRmare Spotify Music Converter. It is a powerful tool for Spotify music users to get Spotify music as local files for free. That's to say, no matter you are a free or Premium Spotify user, you can both use this program without any limit. Then you can use Spotify with Pacemaker DJ program without Premium with ease.

With this tool, the music from Spotify can be converted to MP3, AAC, FLAC and more plain audio formats that Pacemaker supported. Also, it can preserve the original quality of Spotify songs to let you enjoy a better listening experience. Besides that, you are allowed to alter the output audio channel, bit rate and more for Spotify music files as you want before the converting process.

After the conversion, you can get the Spotify music tracks to your computer without premium. Then you can save the audio files forever and use on Pacemaker DJ without any limit.

How to Convert Spotify Music for Use on Pacemaker DJ

This part will show you the steps on how to use DRmare Spotify Music Converter to convert Spotify music for Pacemaker DJ. Please first download and then install this DRmare program to your computer. By the way, please check whether you had installed the official Spotify app on your computer. If hadn't, then get it download at once. After that, you can go ahead to use the DRmare program successfully.

Launch the installed DRmare Spotify Music Converter on your computer. At this time, you will see the Spotify app show also. Now, head to the Spotify app and locate the songs you want to convert for use on Pacemaker. Then drag and drop them into DRmare. Or, you can get their link addresses and then put them into the search box on DRmare one after one. And then touch the '+' icon to get them into DRmare for convert.

Go to the menu icon from the top-right corner on DRmare. Next, choose 'Preferences' from the drop-down list. A new window will display, in which you need to press the 'Convert' tab and then you can go ahead to reset the output audio parameters and audio formats for Pacemaker Spotify playlist. As Pacemaker only supports MP3, you can choose MP3 from the 'Format' section. After then, you can set the channel, sample rate and more for Spotify songs as you want. At last, click on the 'OK' button to apply the settings.
Note: The step above is for Windows computer. If you are on Mac computer, then you need to find the 'DRmare Spotify Music Converter for Mac' on your Mac's system menu. Then get the 'Preferences' option and you can go on the format settings.

Now, touch the 'Convert' button, then DRmare will convert and download Spotify music to Pacemaker DJ supported audio files. A while later, you can find the downloaded Spotify music on your computer via the 'converted' icon from DRmare.

Part 3. How to Use Pacemaker Spotify Offline without Premium 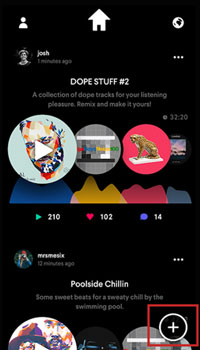 Step 1. Using a USB cable to link your iPhone with your computer.

Step 2. Launch the iTunes program on your computer. Then go ahead to transfer Spotify music to iTunes.

Step 3. Set up the Pacemaker app from your iPhone.

Step 4. Hit on the '+' button from the bottom-right corner. Then select and add the local Spotify music files from your iPhone.

Step 5. Now, you can edit and mix Spotify with Pacemaker DJ app.

Now, from this post, you had learned how to use Pacemaker Spotify offline without Premium. To make it, you will need help from the DRmare Spotify Music Converter. By this tool, you can convert Spotify songs as plain audio files without Spotify Premium. Then you can save Spotify songs to computer for use on Pacemaker DJ and other platforms with ease.

How to Use Spotify Pacemaker DJ Offline