Subscribers of Apple Music are allowed to access to 50 or so million songs and import songs to Apple TV. Yet if you stop to pay for your premium account, you have no way to export songs from Apple Music to Apple TV. Only if you use a third-party software can you do that. Here we will show you what tool you need. 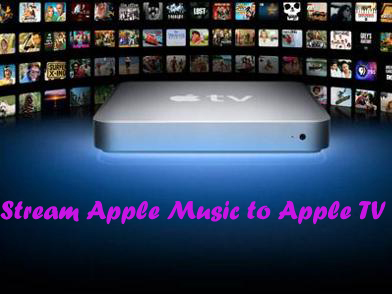 Part 1. Stream Apple Music to Apple TV - What You Need

What software do you need? Actually, DRmare Audio Converter suits you well. It is well-designed for format conversion between Apple Music and Apple TV. With the tool, you can convert Apple Music to MP3, FLAC, WAV, AAC, M4A and M4B without damaging the quality of songs. Meanwhile, it keeps ID3 tags like genre, title, group, composer, year, album cover, etc. for you when running at 30X faster speed. At last, you can listen to Apple Music songs offline anytime on Apple TV.

Part 2. How to Listen to Apple Music on Apple TV

Now you are offered a concrete guide on how to play songs from Apple Music without subscription on Apple TV or other devices.

Download the DRmare Audio Converter on the official website. Install and launch it. Drop your mouse to the first button on the bottom of the conversion window. Click it. Then you can pick some songs from the iTunes library or drag them to the interface. After that, the tracks from Apple Music will be uploaded at once.

Now set the output parameters for Apple TV. You can choose the format you prefer by hitting the "audio" icon. Moreover, the channel, codec, bit rate and sample rate can be customized by yourself for a better quality of Apple Music files. If you want to personalize the output folder, please tap on the "Converted" button. Click the "Preference" icon on the top right, you can then command that the output tracks be archived by Artist/Album or Artist.

Hit the "edit" button on each song, you can set your own ID3 tags. Click the "Convert" icon. Then the conversion will begin. You can get the converted Apple Music files in the output folder after a few minutes. Something you should know is that the free trial of DRmare Apple Music to Apple TV Converter gives you back one-third file of each converted song. If you try to gain a whole file, you need to pay for the DRmare software.

With all the converted Apple Music songs on your computer, now you can add them to the Apple TV for entertainment anytime. You can follow the short guide below to finish it.

2. Run the iTunes app on your phone. Log into with your Apple ID. Select "File/Edit" > "Home Sharing" and tap on the "Turn on Home Sharing" icon.

Now you are able to listen to Apple Music on Apple TV with ease anytime. Enjoy yourself!