How to Listen to Spotify on Hisense Smart TV? Solved!

Q: "Can I get Spotify on my Hisense TV? I bought a Hisense Smart TV for my mom and I want to connect Spotify to the TV. So it will be easy for my mom to enjoy pleasure Spotify music entertainment while resting."

Spotify is a great streaming service provider for you to have fun at home. But it is not available to listen to Spotify songs on Hisense Smart TV without other tools. Why can't you do that? What tool do you need? Let's have a look. 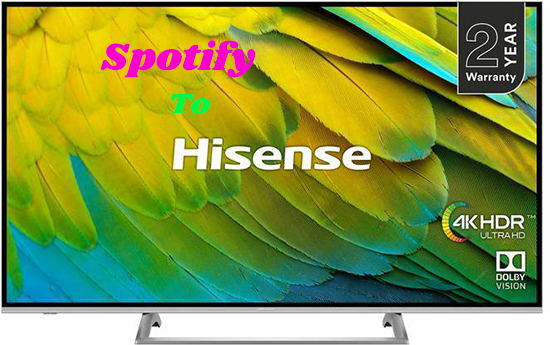 Part 1. How to Get Spotify on Hisense Smart TV

It's known that you can download Spotify songs with the premium account, but you are not allowed to import them to Hisense Smart TV. The Spotify tracks are not compatible with Hisense TV for its encoded format. Therefore, you are required to transfer the Spotify format.

DRmare Spotify Music Converter is designed for you to convert Spotify music to MP3, FLAC, WAV, W4A, W4B and AAC audio files. Then you can move the converted Spotify files to your TV. The downloaded Spotify playlists offered by the DRmare software will be saved forever on your computer so that you can freely listen to Spotify music offline on your devices.

What's more, the DRmare tool pays you back the converted Spotify files quickly as its speed reaches to 5X. Meanwhile, the songs are downloaded with their original data kept, such as the title, group, album cover, composer, genre, year, etc.

Here we will provide you the whole steps to export Spotify music to Hisense Smart TV. You can finish the operation just with a few clicks on your computer. So take it easy.

There are Windows and Mac versions of the DRmare Spotify Music Converter. Download and launch it on your computer. The Spotify app will also be opened at the same time. Browse the songs in the Spotify app and pick the ones you intend to change the format for Hisense TV. Copy their URL and paste to the search bar of the conversion window. Or you can drag them directly to it.

There are six formats for you to select. Click the button "Menu" > "Preference" > "Convert". In addition, you are inspired to customize the channel, bit rate and sample rate. You can also reset the output folder and archive the output files by Artist or Album.

Find the icon "Convert" on the bottom. Hit it. The DRmare Spotify Songs Converter will begin to download Spotify playlists to your computer. Just wait for a minute. You can get the files. Here you should be informed that the free version of the DRmare tool can only offer you one-third of the converted Spotify track. You are suggested to pay for the DRmare Spotify Music Converter if you need the whole converted Spotify file.
BUY NOW BUY NOW

Part 3. How to Add Spotify Music to Hisense Smart TV

1. Copy the converted Spotify files on your computer and paste to the USB drive.

2. Next, link the USB drive with Hisense Smart TV.

3. Then load the Spotify songs to the TV and you can access Spotify music freely.

4. Drag the converted Spotify tracks to the Google Play Music.

If you are a subscriber of Spotify, you might as well follow this way to stream Spotify music to Hisense TV. You can use your computer as a remote control to play music of Spotify on Hisense TV.

1. Launch and play Spotify music on your computer.

2. Hit the Now Playing bar. Choose the Chromecast or Chromecast Audio as the device to play on. 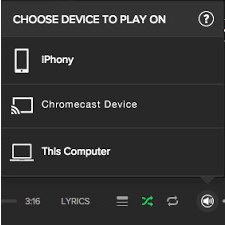