As one of the most popular music streaming apps, Spotify makes millions of songs and albums available to all users. However, if you're a free Spotify user, you can't play Spotify albums in order. You can only play songs from albums at random. In fact, only Spotify premium subscribers have the option to play albums in order. But some free users may feel that it's not worth subscribing to a premium account just to play Spotify album in order.

View also: How to Turn Off Shuffle Play on Spotify

Part 1. How to Make Spotify Play Album in Order with Premium

If you're a free Spotify subscriber, you can only play Spotify albums randomly on your computer or phone. You can't pick exactly which songs you want to listen to, except for pop-up ads that appear in the middle of the songs. When you click on a song in an album, Spotify doesn't play the song you selected directly. Instead, it plays other songs from the album or an unknown playlist.

How to Make Spotify Play Album in Order Android/iPhone: 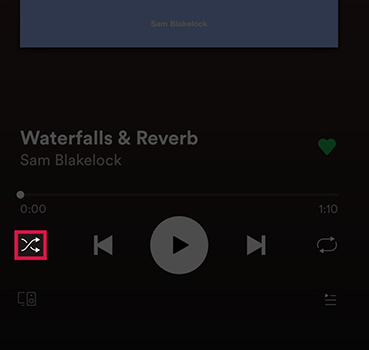 Step 1. Open Spotify on your Android phone or iPhone.

Step 2. Navigate to your "Library" and select an album to play.

Step 3. Tap on the first song in this album.

Step 4. Open the "Now Playing" page and turn off the "Shuffle" button.

Step 5. Once the "Shuffle" button turns gray, your album will be played in order.

How to Play an Album in Order on Spotify PC/Mac:

Step 1. Launch Spotify on your PC/Mac.

Step 2. Go to your "Library", and choose an album you want to play.

Step 3. Double-click on the first song in this album.

Step 4. Click on the "Shuffle" icon to turn off the shuffle play.

Step 5. Once the "Shuffle" icon turns gray, you can play Spotify album in order.

Part 2. How to Play Spotify Album in Order without Premium

If you use a Spotify premium account, you can unlock many features. But it's not worth it to pay for a premium subscription just to play an album in order. Hence, we will present another method that enables you to play album on Spotify in order.

All your need is DRmare Spotify Music Converter. You can use it to download Spotify albums and then play them in order without Spotify premium. Before downloading albums from Spotify, you can choose to convert them to common formats, including MP3, AAC, etc. After downloading, you will be able to play Spotify albums with other music players. In this way, you can skip many Spotify restrictions. You can enjoy Spotify offline and play Spotify album in order without having to pay.

After downloading, the original audio quality of the Spotify album and the ID3 tags will be preserved. It even downloads in batches at up to 5x the download speed. Now install the DRmare Spotify Converter via the "Download" button below. Then follow the tutorial to get Spotify free play album in order.

Follow the tutorial below on how to listen to an album in order on Spotify.

Open the DRmare Spotify Music Converter and the Spotify app will pop up. Copy the URL of the album you want to listen to. Then paste it into the address bar of the DRmare software. Finally, click on the "+" to load the album. You can also drag and drop the Spotify album into it.

Click on the "Menu" icon at the top and choose "Preferences". Then click on the "Convert" tab to customize the output settings. You can set several output parameters for your albums. It's suggested to choose the MP3 output format because it's compatible with most music players.

Once you click on the "Convert" button at the bottom, your added albums will be downloaded at 5X. When it is done, you can click on the "history" icon to locat the downloaded albums. They can be played on your computer offline. You can also save them forever even if your subscription is expired.

Q1: Can I Play an Album on Spotify?

A: Yes, whether you are a Premium or Free Spotify user, you can play albums on Spotify. To play an album on Spotify, go to your library and tap on "album". Then select an album to play. You can also search for the album you want to listen to.

Q2: Why Does My Spotify Only Let Me Shuffle?

A: If you are a free user of Spotify, you can only shuffle play an album or a playlist except on certain Spotify playlists such as those made for you.

Q3: How Do I Get Spotify to Play an Album in Order?

A: You can upgrade to Spotify Premium to listen to album in order on Spotify. Or, you can use DRmare Spotify Converter to play Spotify album in order with other music players.

How to get Spotify to play an album in order? This article describes two methods. If you have a Spotify premium account, then you can play albums in order directly on your computer and phone. Of course, there is another way that allows you to play Spotify album in order without the need for a premium account. You just need to have a professional third-party tool called DRmare Spotify Converter. With it, you can enjoy Spotify's premium features without having to pay for them. Thus, it seems that the second method will be more convenient and smooth for the public.