How to Play Apple Music in the Car [Solved]

To get rid of fatigue in the long distance driving, we can listen to digital audio files in the car. It can keep the brain active and make us relaxed and refreshed during the road trip.

As one of the most popular music and video streaming services, Apple Music is the preferred by most users. It has a large music library with over 45-million high-quality streaming songs. There are several ways to play Apple Music songs in the car. If you are not familiar with Apple Music and car stereo, you can read on this article. We will show you best solutions on enjoying Apple Music in the car with ease. 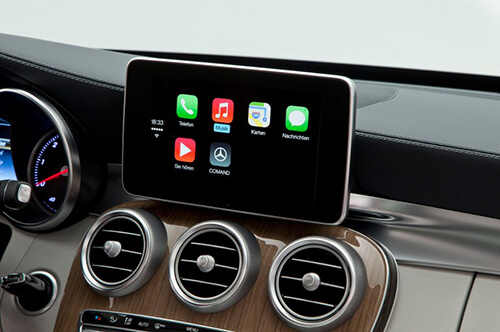 Part 1. Professional Methods to Play Apple Music in the Car with iPhone

Just like the quote from Apple "All the ways you love music. All in one place." if you are an Apple Music subscriber, you are able to access to Apple Music library on many platforms. Such as iPhone, Mac, PC and more with Apple Music app. Unfortunately, it's not compatible with car stereo directly. To enjoy Apple Music streaming songs in the car, you can refer to the following approaches.

Bluetooth is the easiest way to stream Apple Music tracks to car stereo. Almost all cars are equipped with the function of Bluetooth. The instruction to pair with a Bluetooth device maybe varied on different cards. So please check the car stereo manual. Generally speaking, you have to enter into Settings. And click the Bluetooth icon twice to turn it off and back on. On your iOS device, you just need to find out the car stereo and pair with it via Bluetooth. Once paired completely, Apple Music is automatically streamed to touch-screen car audio system.

To connect iPhone with car stereo via a safer way, Apple specially designed and developed CarPlay. It can stream music, audiobooks and others from iPhone to car stereo when driving. If your car supports CarPlay using the Lightning to USB cable, please plug your iPhone into the USB port of your car. But you should pay attention for the note that CarPlay is only supported by iPhone 5 and later.

View also: How to Play Apple Music on iPhone

Part 2. Alternative Ways to Play Apple Music in a Car without an iPhone

The useful solutions mentioned-above are based on the portable iPhone. Not all Apple Music subscribers have purchased an iPhone on hand. What if you don't have an iPhone or devices supported Apple Music application? Will you give up this wonder music service and turn up to other audio files for playing them in a long distance driving? Not really! There is an effective method of playing Apple Music songs in a car without the help of Apple Music app.

Let's discuss the reasons why we can’t enjoy Apple Music streams in a car without an iPhon. Apple has encrypted Apple Music digital audio files with FairPlay DRM technology. As a consequence, Apple Music is only playable on selected devices even if you have subscribed Apple Music already. If you would like to stream Apple Music from incompatible devices, you should discover a third-party Apple Music DRM removal tool.

We high recommend DRmare Apple Music Converter, an all-in-one Apple Music DRM remover. It can remove DRM restriction losslessly and convert Apple Music DRM M4P to universal audio files. Such as MP3, AAC, M4A, WAV, FLAC, etc at 30X faster speed. And then you are able to play Apple Music songs like other common audio tracks in the car.

DRmare Apple Music Converter is available for Mac and Windows operating system. Now I will show the step-by-step tutorial to convert DRM protected M4P Apple Music to common DRM-free audio files for playback in your car.

Step 2Define the output format for playing on the car

Video Tutorial
To save your time, you can also watch this quick video tutorial.

Tips to Enjoy non-DRM Apple Music on the Car Stereo

When you get the unprotected Apple Music on your computer, it's time for you to convert them to the target devices. Such as Windows phones, BlackBerry phones, USB flash drive. You can enjoy Apple Music in the car when you are driving. As for the portable mobile devices, you can use the solutions mentioned-above. Just connect car stereo with target devices, including Bluetooth, USB port and Aux input. As for USB flash drive, you just need to plug it into USB port and Apple Music will show up on the car audio system.

Of course, you can also burn DRM-free Apple Music to CD with the help of iTunes for playing them on car's CD player. Thanks to DRmare Apple Music Converter, you need to import converted Apple Music to iTunes library and insert a blank disc in your computer. And then the only thing you should do is to touch the "Burn Playlist to CD" and imported Apple Music will burn to CD quickly. No matter you have an iPhone or not, you can choose the most suitable way to play Apple Music in the car.

Enjoy Apple Music in a Car
DRmare uses cookies to ensure you get the best experience on our website. Learn moreGot It!