"So I wanna know if there is a way to play Apple Music in background while playing games on my Xbox One X? Have been searching this online for some time to no avail, but maybe some of you here know the magic to do that. Thanks. " - Question from the Reddit forum.

Unlike other streaming app such as Spotify, Pandora, TuneIn Radio, iHearRaido etc., Apple Music doesn't exist on Microsoft game consoles Xbox One X/S or 360. In addition, you can't copy the Apple Music songs to the Xbox manually either as they are DRM protected. That is really a shame.

Do you also encounter the similar issue? If so, you are definitely in the right place. We will help you find the best workaround to stream Apple Music on Xbox.

View also: How to Stream Spotify Music to Xbox 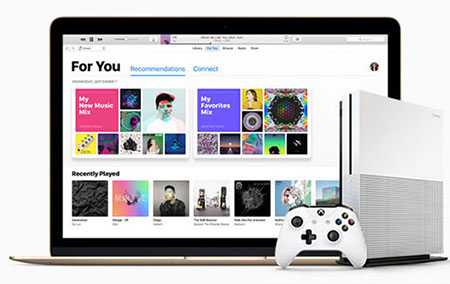 Part 1. Best Way to Play Apple Music on Xbox One/360 without Costing You Money Annually

When it comes to Apple Music playback, there are 2 most talked methods. The first way is to get an Apple TV which costs $149. The second one is to get the AirServer app from the Xbox at $19.99.

Well, after trying both ways out, I came to the conclusion that both are not the best ways. Though AirServer supports to AirPlay common music such as Spotify music to Xbox, it doesn't support any DRM protected contents such as the iTunes movies or Apple M4P audio files. As for the Apple TV, it does work well if you don't care to spend monthly charge on the Apple Music subscription.

If you are not satisfied with the two tools, there is another best way for you though. You can use a special audio DRM removal tool to circumvent this trouble and stream Apple Music freely on Xbox.

DRmare Apple Music to Xbox Converter for Mac/Windows is a compelling software to convert and backup Apple Music. By converting M4P to a common audio format such as MP3, FLAC, M4A, AAC etc., you won't lose the privilege to enjoy them even after you cancel the monthly subscription. Compared to other software in the market, DRmare has great features they are not best. The only drawback is that the premium version charges $39.95 for one time purchase. Anyway, it is really worth it considering how much it may save you on the Apple Music subscription fees.

To check if the software meets your requirement or not, you can download the free trial version to try it out anyway. Just click the "Download" button above to pick up either the Windows or Mac version. Here I will take the Mac version for instance to show you how does it work.

First off, you can drag & drop or click "Add Files“ button to import the Apple Music files from the iTunes library. If the M4P files are not downloaded to iTunes yet, please log on your account to downloaded them first from the iCloud Music Library.

Technically, Xbox One/360 supports the audio formats 3GP, MP3, WMA, AAC, etc., you can select any one format within the list. Personally I'd recommend MP3 as it is widely supported. You can play MP3 files on any players or devices such as VLC, Kodi, Winamp, Media Player Classic from the Xbox or other game consoles like PlayStation 4 Pro.

Ready? Just press the converting button from the bottom right, DRmare DRM Audio Converter will start converting your iTunes M4P music files to MP3 quickly. With the quick routine update, DRmare DRM removal software has best compatibility even if you have the latest version system or iTunes version. Note: If some of your files can't be converted, you just need to check if they are downloaded completely and authorized on your computer.

Part 3. How to Stream Music to Xbox from USB

Now it is now to Enjoy the iTunes Music. You can do that via the DLAN server etc., but USB seems more easier. The Xbox Media Player player supports to browse audio files from USB1/2/3 drives with FAT32/exFAT/NTFS format. Please follow the steps.

1. Copy the converted MP3 songs to the a USB flash drive or external hard drive.

2. Connect the USB drive to one of the USB ports on your Xbox One.

3. Open the Media Player app and browse the songs to play.

4. You can control the playback on the player such as fast forward or backward, adjust the volume, etc.

In this way, you can stream Apple Music to Xbox any file without any limitations. So easy, right? Do you find this guide useful? Let's know your thoughts by comments below.