How to Convert iTunes M4V Movies to BlackBerry PlayBook

Based on QNX Neutrino, BlackBerry PlayBook is the first device of BlackBerry to run BlackBerry Tablet OS. The apps existing in PlayBook are developed using Adobe AIR. The following generations of PlayBook can support Android-based applications with the new BlackBerry 10 operating system.

With a 7 inch big touchscreen, BlackBerry is available for playing up to 1080p videos with Wi-Fi connection and a dual core. Besides, the storage of this tablet can be divided into 16GB, 32GB and 64GB. Due to the large memory, the big display, as well as support for 1080p videos, there is no doubt that BlackBerry PlayBook is a reasonable video player to enjoy your digital life.

However, when you attempt to watch iTunes movies and TV shows on this smart tablet, you will be sold that the files are not compatible with PlayBook. But don't worry. In order to improve the user experience of BlackBerry tablet, in this article, we'll introduce the best solution to make it possible to convert iTunes videos to PlayBook for playback. 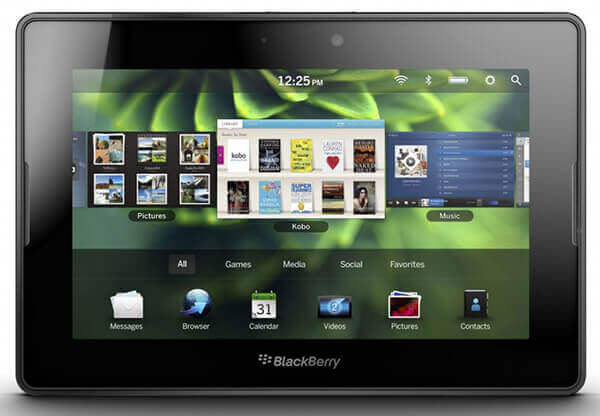 Part 1. Why iTunes Movies Are not Compatible with PlayBook

In order to sync iTunes library to BlackBerry PlayBook, the first thing you should know is that iTunes rentals and purchases are encrypted with FairPlay DRM copyright protection to prevent iTunes users from unauthorized sharing with others. These DRM iTunes videos are only playable on Apple-approved devices and can be shared up to five computers with iTunes-linked Apple ID, including iPhone, iPad, iPod Touch, Apple TV, and more. Plus, the supported formats of current PlayBook could be H.264, MPEG, WMV, and Divx. However, iTunes movies and TV shows are all encoded with M4V container format that is not supported by PlayBook. Hence, when you need to transfer iTunes videos to BlackBerry tablet, you should discover a powerful third-party iTunes DRM removal tool, which can not only remove DRM protection from rented and purchased iTunes, but also convert iTunes DRM M4V to MP4 compatible with PlayBook.

When it coming to the best M4V to MP4 converter, a lot of software could appear to your mind, or you could already have some M4V to MP4 converters in your hands. But from the discussion mentioned-above, iTunes digital videos are coming with DRM encryption technology. As a consequence, these common converters don't work well with DRM M4V files. As for the professional iTunes DRM M4V to MP4 software, here, we’ll highly recommend DRmare M4V Converter for Mac/Windows. It can get rid of DRM restriction from both iTunes rentals and purchases by doing a few clicks, and convert DRM M4V to other common formats, such as MP4, AVI, MPEG, WMV, MOV, MKV, and more with 100% original quality preserved. With the help of DRmare M4V Converter, you can play iTunes movies on BlackBerry PlayBook with ease.

With the easy-to-use user interface, DRmare M4V Converter for Mac/Windows is powerful yet easy enough for every customer to convert iTunes M4V DRM videos to common DRM-free files, even if you are a newbie in this filed. Just download it and follow this step-by-step guide to learn how to watch iTunes videos on BlackBerry PlayBook.

Run DRmare iTunes to BlackBerry Converter, click the "+" button at the bottom left corner of the main interface, the iTunes library will turn up automatically and you can select iTunes M4V files that you want to transfer to DRmare. Or the other common way is by clicking the drag&drop action to add iTunes videos to this smart software.

Since DRmare M4V Converter supports batch conversion, you can import all your wanted iTunes videos to DRmare once. Once you finish adding files, you can click "Format" option to choose the output format according to your needs. Here, we highly recommend you to set MP4 format that is compatible with various portable devices.

When all settings are OK, you can start to convert iTunes DRM-protected movies to PlayBook compatible files by tapping the "Converter" tab at the bottom right corner. After the conversion process ends, it's time for you to watch iTunes DRM movies on BlackBerry PlayBook for playback.

Play iTunes Movies on PlayBook
DRmare uses cookies to ensure you get the best experience on our website. Learn moreGot It!