How to Stream iTunes Movies to Google Nexus Player

Unveiled on October, 2014, Nexus Player is a powerful digital media streamer co-developed by Google and Asus, which was created to compete against Apple TV, Roku streaming box, and other media players in the market.

Combining the set-top box and an optional game controller, Nexus player is able to not only play movies and music from Google Play, but also available for streaming digital content to TV from Chromebook, Android, and even iOS devices. By adopting the Bluetooth technology, you are allowed to get the remote control with a microphone for voice search. As the first media streaming box to run Android TV platform with built-in the Android 5.0 (Lollipop), you are also permitted to streaming games and Android apps for playing on TV. 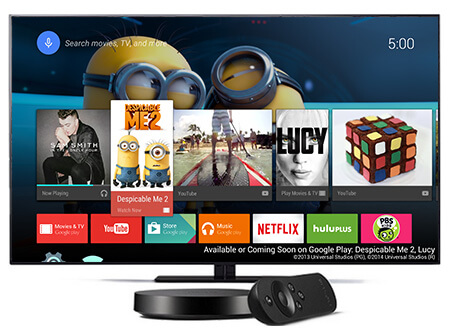 There is no doubt that Nexus Player along with Android TV is an excellent media streaming player to give users more entertainment, since it supports thousands of online streaming services, such as Netflix, Crackle, Hulu Plus, YouTube, and it enables you to play Android games on a big screen paired with a useful gamepad. With these stunning features, Nexus Player is the strong competitor to Apple TV. However, the only defect is that Nexu Player can't stream iTunes digital content to TV directly. So, is there a great solution to make it possible for playing iTunes movies on Google Nexus Player that makes it become more perfect?

Generally speaking, iTunes movies and TV shows are encoded in M4V container format with built-in FairPlay DRM technology, which can be only playable on Apple ecosystem. That is to say, it prevents you from copying iTunes protected M4V videos to Nexus player directly. Therefore, if you want to do that, the first yet only thing you should do is to remove DRM protection from movies and TV shows purchased and rented from iTunes. Fortunately, a variety of software developers have heard the demand of customers and created some professional iTunes DRM removal tools to help users to stream iTunes movies to Google Nexus player for watching.

Part 2. Best Solution to Get Rid of DRM Restriction from iTunes Purchases and Rentals

In fact, there are many iTunes DRM removal tools existing in the market to break DRM locker from iTunes videos, such as Drmare M4V Converter, TunesKit iTunes removal tool, Requiem, and much more. If you have difficulty in choosing which one from these DRM crackers, here, I highly recommend DRmare iTunes to Nexus Player Converter that is dedicated to unlock the DRM constraint losslessly from iTunes movies, TV shows, music videos, and iTunes Extras. What's more, it's also a functional video converter, since it enables you to convert iTunes M4V to other common formats, such as MP4, MOV, AVI, MKV, MPEG, etc. In addition, these DRM-free iTunes movies and TV episodes converted by DRmare will be playable on Nexus player as well as any other media players like Roku and Amazon Fire TV.

Step 1Launch DRmare and import iTunes movies to it

Double click to launch DRmare, and you will see that iTunes will open automatically. And then, there are two ways for you to import iTunes movies by clicking the "Add Files" tab or via the drag&drop action directly.

Tap the "Format" button to choose the output format supported by Nexus player. MP4 format is a good choice for you, which are compatible with many devices and players. Besides, if you want to change the bit rate, frame rate, etc., please click the "gear" option to customize your converted videos.

Step 3Apply the settings to convert

Before you click the "Convert" tab to start the conversion process, please make sure that everything you want to set is OK.

Amazon Fire TV doesn't support to play local videos from USB though it supports USB external storage. But don't worry, you can stream iTunes videos to Amazon Fire TV via the Amazon Cloud Drive or Kindle Fire Tablet etc.Now, these iTunes videos are converted to DRM-free MP4 files, which is available for Google Nexus player. You can follow the simple ways below to stream those unprotected iTunes DRM movies and TV shows to Nexus player.

1. Upload MovStream iTunes movies to Nexus player via USB flash drive. Since there is a USB port on the Google Nexus player, so you can transfer your converted iTunes videos to USD flash drive from the computer firstly, and then connect it with Nexus player by plugging in the USB drive to the port.

(Click to rate this post)
Generally rated 4.9 (243 participated)
Anna Groove is an experienced writer of DRmare. She has the full knowledge of enjoying the audio and video better. Tips for enjoying Tidal music and iTunes videos could be found in her articles.
Related Articles