How to Play iTunes DRM Movies on RealPlayer

RealPlayer is originally known as one of the first streaming media players for streaming media over the internet on its first debut in 1995. Now it has become a full fledged video player with a lot of media centric features such as playing videos from local devices or web, converting and trimming movies, sharing videos etc.

Additionally, it supports different videos formats like MP3, WMA, 3GP, MP4, RA, M4V, RM, FLV, AVI, EVRC and runs on multiple platforms including Windows, MacOS, Linux, Android, Symbian, Palm. As a result, it has become the most beloved players of users. Many users use it as an all-in-one tool for media files enjoyment from any sources.

However, RealPlayer doesn't support video files from iTunes. This really annoys users who are iTunes video fans. In this article I will introduce a workable solution to play iTunes videos on RealPlayer by removing DRM. 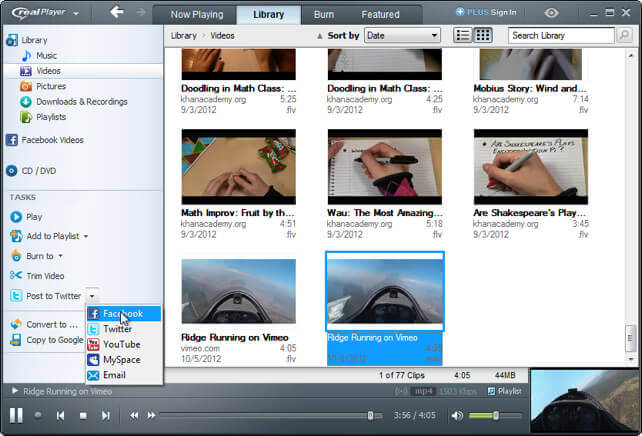 Part 1. Most Convenient Way to Enjoy iTunes Movies on RealPlayer

As we know, iTunes is also in M4V format. You maybe puzzled why iTunes M4V videos are not playable considering that M4V format is on the RealPlayer support list.

But one thing you need to know about is that iTunes purchased and rental M4V movies or TV shows are encrypted with DRM (Digital Rights Management) copyright protection. Under this condition, the iTunes movie episodes are only accessible within Apple's ecosystem. Nowadays the official way to enjoy iTunes videos so far is by iTunes or QuickTime. This makes it really hard for some users to enjoy iTunes videos.

If you'd rather not use iTunes player or Quicktime, there is another better solution by breaking the DRM protection. How? Luckily it is not a difficult job. You can simply get a DRM Media Converter such as the DRmare iTunes M4V to RealPlayer Converter to convert the iTunes videos. Then the DRM will be removed automatically. After that, It will save you a lot of hassles such as you don't need to authorize the devices any more and there is not a limitation on the quantity of devices. You can enjoy them on RealPlayer in a most elegant way as you want.

Here I will take the DRmare software Mac version to list the general steps for your reference. The steps are same for both Windows and Mac actually.

To add the iTunes purchases and rentals to the software, you have to download them to iTunes completely first. Then you can drag and drop them from iTunes to DRmare software main screen. You can also click the '+' icon to open the DRmare library manage window, it will list all the available iTunes DRM videos and you can select the ones you want.

By default, the output format is set as 'MP4(LossLess)' on the DRmare M4V Converter, you may keep the default format. Or you can select one of the formats supported by RealPlayer such as 3GP, 3GP2, FLV, WMV, M4V, AVI and so on. You can even customize the output parameters like bit rate, frame rate, codec, output folder, subtitle, audio track.

At last, you can click the 'Conversion' button, DRmare iTunes to RealPlayer Converter will help to process the DRM files to common video files in a 30X faster speed. What worth to mention here is that the speed may varies on different devices as it is still related to the computer CPU, memory, motherboard, hard drive and operating system. So please just wait a while patiently for it to complete successfully.

Part 3. Extra Tips: Get Full Use of RealPlayer

Now you have already got the converted DRM free iTunes videos. You can add the files to the RealPlayer library and play them anytime. Also, RealPlayer has other options to help you get better use of your videos. There are two useful features you may have a try. The first one is that it can help you trim the videos. You just need to right click the video from the RealPlayer media library and then choose Edit > Trim, it will pop up a window for you to edit the video. Second, it integrates the sharing features of Facebook, YouTube, email etc. similarly, you just need to right-click the video and choose 'Share' and follow the screen wizard to share your videos like iTunes movies or TV shows. For the other features like burning DVDs, uploading to cloud drive etc. of RealPlayer, I'd rather not recommend as they are not free, you have to subscribe to use them.

Part 4. Video Tutorial: How to Play iTunes Movies on RealPlayer

For a more intuitive way to remove DRM from iTunes movies and watch them on RealPlayer, the following video guide will show you how to get it done step by step with the help of DRmare M4V Converter.