All the music lovers would know the joy they had while listening to their favorite songs. You must also wonder how to find the year's most-played song on Spotify. Well, here is the solution. Spotify is one of the reputable and fastest apps that unveils the most streamed songs in Spotify 2022 for you. Millions of active users take advantage of this platform and enjoy the music the most. The most streamed song on Spotify is the song that is the most listened to song on Spotify. 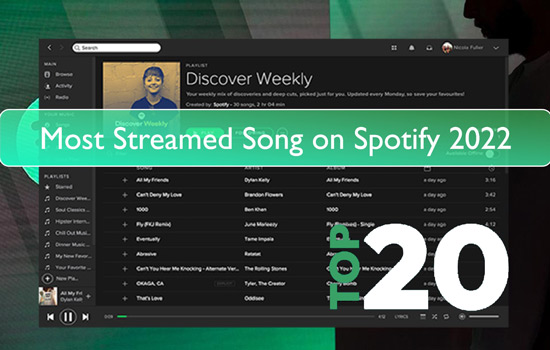 In this article, we have discussed and given a brief introduction to the top 20 Spotify most-played songs for you. Now, you can check the list of most streamed songs on Spotify below.

1. Shape of You by Ed Sheeran

"Shape of You" by Ed Sheeran ranked first in the list of Spotify's most streamed songs, with over 3 billion streams on Spotify, making it one of a kind. On 3 January 2017, it was first released.

2. Blinding Lights by The Weeknd

It is the second most streamed song on Spotify, with more than 2.8 billion streams. It was first released on 20th November 2019. They are highly known to gather numbers faster than any other song.

3. Dance Monkey by Tones and I

On the third, Dance Monkey by Tones and I stand with over 2.5 billion streams. This popular song was released on May 10th, 2019.

"Rockstar" holds the fourth spot on Spotify's most streamed songs. This song boasts 2.3 billion streams. This most streamed rap song on Spotify was first released on 15th September 2017. It is Beerbongs & Bentleys album single lead song.

5. Someone You Loved by Lewis Capaldi

This song has the privilege of winning the 2020 Brit Awards song of the year award. It has been streamed over 2.2 billion and is the 5th most-streamed song on Spotify. "Someone You Loved" is sung by a Scottish singer and was Released on November 8th, 2018.

6. One Dance by Drake, Wizkid, and Kyla

The song on the list has won people's hearts with over 2.2 billion streams. It was one of the most popular and hot songs and climbed to the top list in 15 countries. Some of them are the United States, the United Kingdom, the Netherlands, Canada, Switzerland, Germany, and France. The song was put out on 5th April 2016 for digital downloads.

7. Closer by The Chainsmokers and Halsey

Another top-of-the-line song, "Closer by the Chainsmokers", was released on the 29th of July 2016, with over 2.2 billion streams on Spotify. It also owned a top position for 12 consecutive weeks on US Billboard Hot 100, making it immensely favored and running in the US.

This song has a soundtrack from the animated movie with more than 2.2 billion streams. It also grabbed the number one position on the US Billboard Hot 100 chart.

A well-known song sung by a Canadian artist was first published on June 21st, 2019 with over two billion streams on Spotify.

Released on February 1st, 2017, this song impressed its listener by being the first most-streamed rock song on Spotify. In many countries, it has topped the charts over two billion times.

This song is another on the list, streaming over 2.2 billion. Released on 29th March 2019, the song was so successful and prevalent that it grabbed the top spot in many countries.

Released on 3rd March 2017, "Perfect" is the second song by Ed Sheeran that has ranked on the list of most streamed songs on Spotify. This song has done well, garnering over two billion streams.

"Say You Won't Let Go" song by James Arthur was released on 9th September 2016. It has over 1.9 billion streams on Spotify, making it one of the most popular songs in many countries.

14. Thinking Out Loud by Ed Sheeran

This song by Ed Sheeran is the third song by the singer that is known as the most streamed song of all time on Spotify. It has been streamed more than 1.9 billion times up to date. It was released on 20th June 2014.

The second song of Drake Scorpion album is ranked 15 in the list of most streamed songs on Spotify in 2022. It has over 1.9 million streams on Spotify and has been awarded Best Rap Song at the 61st Grammy Awards.

Another popular song by English singer Dua Lipa is "Don't start now". It was released on 1st November 2019, with 1.8 billion streams.

Ed Sheeran's fourth song, "photograph", is on the list of most streamed songs on Spotify. The music has been streamed more than 1.8 billion times on Spotify and has topped the charts in many countries.

The second album of XXXTentacion sad is trendy and reached the top chart in the USA in 2018. It was released on 1st March 2018.

20. Starboy by The Weeknd and Daft Punk

Streamed more than 1.7 billion times, "Starboy" was released on 21st September 2016. The song touched the highest spot on the US Billboard 100 and topped the charts in several other countries.

Part 2. How to Download Most Played Songs for Free on Spotify

Often you don't feel like going through the hassle of logging into a Spotify account and enjoying your favorite streamed song simultaneously. To listen to Spotify most played songs on any other device, you first need to download and convert them into another common audio format, like MP3. For this purpose, you've required an excellent and reliable Spotify music converter.

DRmare Spotify Music Converter is the one you will need, which is specialized in downloading most listened to songs on Spotify with a free account and convert them to MP3, FLAC, WAV, AAC, M4A, and M4B without affecting the quality. With the help of this tool, you can enjoy high-quality Spotify most streamed songs in whatever way you want without being disturbed by annoying ads.

Step 1. Drag most streamed songs on Spotify to DRmare Spotify Music Converter. Please launch this powerful Spotify music downloader, and then you can search most played songs on opening Spotify app, and then drag and drop them to the conversion window directly.

Step 2. Adjust output format and other parameters for Spotify most played songs. Once you have dragged Spotify songs, click the menu bar and select 'Preferences'. You can now see a new window and set the output format in which you would like the most listened to Spotify songs to be downloaded; such formats include MP3, WAV, AAC, M4A, FLAC, and M4B.

Step 3. Download most streamed song on Spotify to MP3. Lastly, click the 'Convert' button to start downloading Spotify songs free. In a while, you can see that Spotify songs will be downloaded to MP3 or other standard audio files you set before.

Part 3. FAQs About Most Streamed Songs on Spotify

Q1: What Is the Most Streamed Song on Spotify 2022

The most streamed song on Spotify is "Shape of you" by Ed Sheeran, with over 3 billion streams.

Q2: What Is the Most Played Song on Spotify All the Time?

The Shape of You by Ed Sheeran is the most-played song on Spotify.

Q3: What Is Taylor Swift's Most Listened to Song on Spotify?

Taylor Swift is one of the most popular female music artists. Her most streamed song on Spotify is "I don't wanna live forever" with Zayn Malik. It has over 689.7 million streams.

Q4: How to See Your Most Played Song on Spotify?

You can't directly view your playlist on Spotify from the app. Instead, you need to view your Spotify Wrapped 2022. You can seek help from this website Spotify.com/US/Wrapped. It will ask you to log into your account. Once logged in, you can choose "Your Top Songs 2022" option to view, play and enjoy the top 100 songs you have played the most in descending order.

Spotify is one of the world's most reputable, well-known, and popular streaming services. You can enjoy high-quality songs for free anytime. It is because it offers millions of high-quality pieces that users love. Some have very high streaming, and some might have zero streaming. Through this article, you have discovered what song has the most plays on Spotify. You can now enjoy most streamed song on Spotify offline just by downloading them using DRmare Spotify Music Converter even if you are a free Spotify user.

Most Streamed Song on Spotify in 2022