As the society goes into the digital age, there were plenty of players that could store music. The SanDisk MP3 player has been a trusted brand in digital content and storage. In fact, SanDisk MP3 player is perfect for music enthusiasts.

Spotify app is a powerful streaming music service provider. You can get the songs you like in it. If you want to move playlists in Spotify to SanDisk MP3 player. You have to convert the format of Spotify music. Why do you need to do that? Can you download music from Spotify to the SanDisk MP3 player directly? Let's get the answer together. 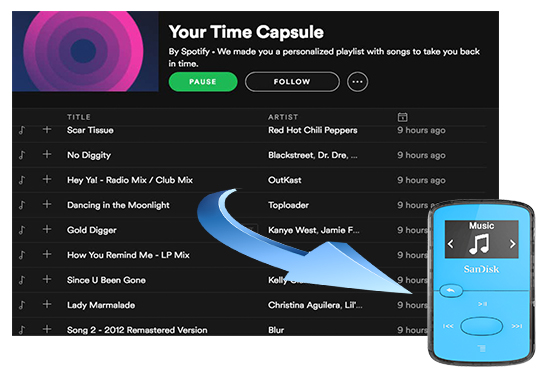 Why can't you put music from Spotify to the SanDisk MP3 player? Because Spotify tracks are formed as Ogg Vorbis not MP3. While the SanDisk MP3 player only supports MP3. So the Spotify songs are not compatible with Sandisk. In this regard, for loading Spotify playlists to Sandisk, you have to transfer the format of Spotify music to MP3.

How to convert Spotify music to MP3? Here is an effective tool I'd like to recommend. DRmare Spotify Music Converter is such a tool that aims to transfer songs from Spotify to SanDisk MP3 player. You can have a free trial first and then decide whether you will buy it or not. What you should know about the DRmare program is that it keeps the original quality during its conversion process. Thus, you don't need to worry about the quality at all.

Moreover, you will get the converted Spotify files with all their ID3 tags preserved automatically. The conversion will just last for a few minutes or so. Hence, even if you plan to convert numerous Spotify tracks in a time, you will not wait for a long time as the DRmare Spotify Music Converter runs at 5X faster speed.

Part 2. Download Spotify Music to SanDisk MP3 Player - What You Do

Guess you may decide to use DRmare Spotify Music Downloaer to gain a SanDisk Player that works with Spotify right now. Take it easy. You can get the detailed guide as follows.

Note: DRmare Spotify Songs Converter is available for both Windows and Mac systems. The free trial gives you a one-minute converted file of each Spotify track. For a completed transferred file, you are suggested to purchase the DRmare software.

Download the DRmare Spotify Music Converter on your computer. Open it. The Spotify app will run at the same time. Sign in Spotify and choose the songs you would like to add to Sandisk. Copy their URL and paste it to the search bar of the conversion window. You can also drag the songs manually to the interface. Then you will see them in the window in the end.

Find the icon 'Preference' on the top right of the window. Tap on it. You can then set the output format as MPs for SanDisk so that you can play Spotify music on SanDisk freely. In addition, you can also personalize the channel, bit rate and sample rate to get a higher quality of the converted files.

By the way, the DRmare software allows you to archive the output files by Artist/Album or Artist. Moreover, you can set the conversion speed as 1X for a more stable process. Drop your mouse on the uploaded songs, you are able to reset their names. If you want to customize the output folder, just hit the 'folder' icon on the bottom of the window.

Having finished all the settings above, you can convert and download Spotify tracks to SanDisk now. Click the 'Convert' button. The Spotify to SanDisk conversion will thereby begin. In the process, the ID3 tags like title, group, composing, genre, etc. will be saved automatically. Within a coffee time, you can get the converted Spotify files in your favorite output holder.

Now you have got the converted Spotify files on your computer. So you just need to stream them to the SanDisk MP3 player with the USB cable. You can follow the ways below to do it.

1. Plug your SanDisk MP3 player into your computer via the USB cable.

2. Open the file holder with the converted Spotify tracks inside.

3. Select the Spotify songs you are going to load to the SanDisk player.

At last, you can successfully download Spotify Music to SanDisk MP3 player for listening anytime.