How to Get Spotify Songs on iPad? Solved!

iPad is a tablet computer product designed and sold by Apple. The iPad's basic functions include recording, taking pictures, playing music, and browsing web pages and email, etc. After installing the application, you can add other functions to the iPad, including running games, consulting reference books, GPS navigation, using social networks, and so on.

With such a powerful devise in your hand, you may want to add some music software to satisfy your needs. Spotify app is a great music server for you. Then you should wonder how to get Spotify songs on iPad? Let's explore it in this article. 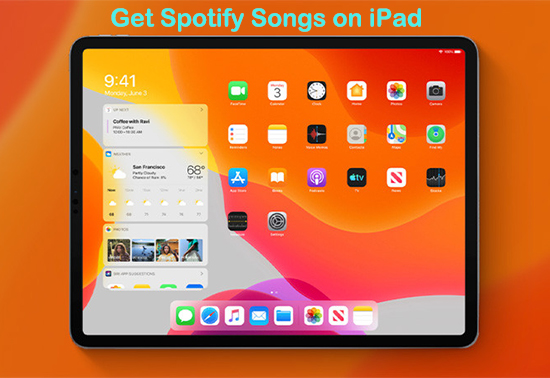 It’s a great time to listen to Spotify music in our daily life. There are three ways for you to import Spotify playlists to the iPad. First of all, to sync songs from Spotify to iPad, you need to install the Spotify app from App Store on the iPad.

Access to Spotify on iPad with a 30-day Free Trial

Launch Spotify on your iPad. Log in to your account. Then you are allowed to have a 30-day free trial service. During the days, you are free to enjoy tons of Spotify songs, playlists, albums, etc. without payment. But you are prohibited to save them for offline playback. Yet the music experience must be wonderful to you. Furthermore, to download songs from Spotify to the iPad, you are required to upgrade your account to a premium one when your trial version expired.

With your subscribing to Spotify Premium, you are able to play ad-free Spotify tracks and save them for your offline playing. Though you have to pay for the service at $9.99 per month, you will find it worthwhile to have such a fantastic trip. If this is affordable for you, it is the best way to get Spotify music played on your iPad.

With the two approaches above you can easily play Spotify playlists on iPad. Here we offer you the best way. With the professional tool - DRmare Spotify Music Converter, you can quickly convert the format of Spotify tracks to ordinary files.

Is it necessary to transfer the format? Actually, Spotify music is made in the format of Ogg Vorbis. On the other hand, the iPad supports AAC, HE-AAC, MP3, AIFF, WAV, etc. but not Ogg Vorbis. In conclusion, Spotify tracks are not compatible to be played on the iPad. Concerning this, you can use the DRmare Spotify Music Downloader to convert the format from Ogg Vorbis to MP3, AAC, or WAV. As a result, you can upload the Spotify tracks to your favorite apps for offline entertainment.

Meanwhile, the DRmare tool downloads the Spotify songs losslessly while running at 5X faster speed. You will get converted Spotify tracks with ID3 tags preserved immediately. In all, you are free of paying monthly for playing Spotify music on your iPad.

From the above, you can know that the DRmare Spotify Songs Converter is a good helper for you to download songs from Spotify to iPad. Now you can follow a concrete guide below to convert the format of Spotify music.

Install the DRmare Spotify Music Converter on your computer. Open it. The Spotify app will be launched at the same time. You can discover some songs in Spotify. Drag the Spotify tracks which you intend to convert to the conversion window. Or you can copy and paste their links to the search bar of the interface. Click the '+'icon. The Spotify playlists will then be uploaded.

DRmare Spotify to iPad Converter enables you to convert Spotify tracks to MP3, AAC and WAV. Hit the 'Preference'button on the top right. Then you can personalize the output format. Besides, you are offered the right to customize the channel, bit rate as well as the sample rate. Moreover, the DRmare software allows you to archive the output tracks by Artist/Album or Artist. Set the conversion speed as 1X faster, the unexpected errors could be avoided in the end.

Tap on the 'Convert'button. Then the DRmare Spotify Playlists Converter will download the Spotify songs. When the conversion ends, you can locate the converted Spotify files in the history holder.

Tips: You are only provided one-third of the converted Spotify file of each track. To get a fully transferred Spotify song, you are suggested to buy the DRmare tool.

Launch the iTunes app. Choose 'menu bar'> ’Files'> ’Add to Library'. Then you can add the converted Spotify files to your iPad for listening anytime. Or you can drag the Spotify tracks to the iTunes window directly. At last, you can successfully get the Spotify songs on your iPad.

Get Spotify Songs on iPad