"I have downloaded many Apple Music playlists on my iPhone 6S, but I found the entire library is missing after upgrading the iOS 11 to the latest iOS 12. Is there a way to restore my Apple Music library? Please help." - Question from Apple forum.

There are many reasons which may cause your Apple Music songs missing such as system update, you delete them by accident or some files corrupted. But don't worry. No matter how they were lost, you can restore the Apple Music playlist if you have already backup it to the iCloud music library.

View also: How to Remove DRM from Apple Music 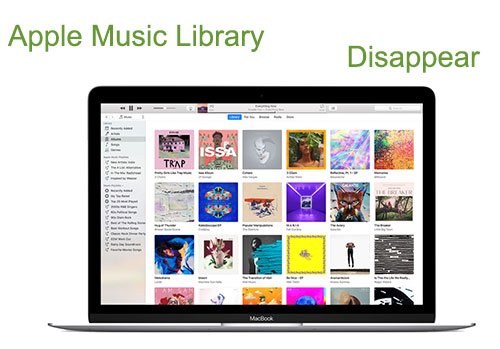 "I have downloaded many Apple Music playlists on my iPhone 6S, but I found the entire library is missing after upgrading the iOS 11 to the latest iOS 12. Is there a way to restore my Apple Music library? Please help." - Question from Apple forum.

There are many reasons which may cause your Apple Music songs missing such as system update, you delete them by accident or some files corrupted. But don't worry. No matter how they were lost, you can restore the Apple Music playlist if you have already backup it to the iCloud music library.

View also: How to Remove DRM from Apple Music

Part 1. Get Your Apple Music Playlist Back from iCloud

Generally, if you turned on the iCloud Music Library, all the playlists or songs you listening on the local devices will be uploaded to the iCloud. If you have miss the files, you can simply turn on the iCloud to get the library back.

The instruction is same for iPhone, iPad and iPod Touch. Here I will take the iPhone X to show you how to do that.

1. Launch iPhone X, you will see the main screen of it.

2. Click "Settings" > "Music" menu, then tap the iCloud Music Library to turn it on.

3. It there is no other music on your device, the songs and playlists from the iCloud Music Library will be downloaded to your device immediately. Else you can choose to keep music or replace.

Note: You need to sign up Apple Music or iTunes Match to have the iCloud Music Library option.

If you'd like to restore Apple Music playlists on your computer, you can follow this tips to turn on iCloud from iTunes.

1. Start iTunes player from your computer.

4. Your entire music library will return to iTunes from the iCloud.

Besides, you can also sync the Apple Music playlists to your other devices such as Apple TV, Android phones and so on. It is much more easy. You just need to sign in the same Apple Music ID and password.

Part 2. How to Backup Apple Music Library to Avoid Missing

Your Apple Music playlists can be super precious because you have spent much time and energy on creating them. Normally you can get them back from iCloud after losing them. But sometimes what if you haven't backed up them yet or you don't have access to iCloud Music Library any more? Well, that would be very frustrated just thinking about that.

To prevent all your Apple Music songs and playlists from missing, you can also back up them offline forever. Someone may wonder if there is a free recorder for this. The answer is yes. But honestly it will take you much more time. Personally I'd recommend a professional commercial downloader.

DRmare Apple Music Playlist Downloader for Windows/Mac is a well-developed tool for decrypting Apple Music songs. With it, you can get rid of the FairPlay DRM protection and convert M4P to MP3, M4A, M4B, WMA, AAC for copying elsewhere. Even if you cancel the Apple Music subscription later, your music list won't vanish automatically.

I have used many software before. As I know, DRmare software has the second-to-none performance and usability. To find out how it works, you can also click the "Download" button to evaluate it for free by yourself. Following the quick steps on backing up Apple Music playlist.

DRmare software is for converting songs from the local computers. Please make sure you have save the DRM music offline on your iTunes player first. Then you can drag & drop the playlist or album directly into the DRmare main screen. There is not limitation on the number of files you imported, so you can add as many as you want.

When backing up songs, you need to pay attention to the audio size and quality. Generally, FLAC and WAV have lossless quality but they also has rather big size. It is so easy to run out of size on your hard drive. Unless you have unlimited hard disk space, I won't recommend the lossless formats. MP3 is a lossy format, but the quality should be good enough for playing on most devices. Here I will choose MP3.

After doing the settings, you can click "Convert" button to convert the songs to the ones you have set. Depending on the number of tracks you imported, the converting time may vary. But it should be pretty fast with its 30X speed. When it is done, you can click the history icon from the bottom right to locate all the converted Apple Music.

With DRmare software, you will 100% own the the music just like you have already bought them from iTunes. You can copy the songs to any devices. In my opinion, it is the best way to backup Apple Music for its great quality and 30X fast speed. You don't need to worry about Apple Music library disappear anymore. One thing you need to keep in mind is that DRmare software is only for personal use, so please don't use it for making money.