How to Listen to Apple Music on Chromebook [Indepth Tips]

As a matter of fact, there are several ways to stream music on Chromebook. For Apple Music, firstly, Chromebook released the Apple Music Android app to do it with Chromecast support. Later, Apple Music Web Player was launched to work perfectly on a Chromebook. Besides, it's also able to convert Apple Music to Chromebook compatible audio files and play them in any media player on Chromebook.

But with the web-based Chrome OS, you can't use Apple Music on Chromebook in the same way as Windows PC and Mac. Here, we will show you the complete and detailed steps on how to operate it.

Part 1. Get Apple Music on Chromebook via Andriod App

By default, Chromebook works well with the general streaming music service. It includes Spotify, Amazon Music Unlimited, Google Play Music, Pandora radio, etc. But Apple Music seems to be an exception. There is not an iTunes nor an Apple Music app for Chrome OS. This makes it impossible to authorize the M4P files on Chromebook like Windows and Mac PCs.

Fortunately, with the new release of Apple Music's Android app in 2019, one of the highlight features is to support for Chromebook. It means that you can get Apple Music on a Chromebook via the app. But not any device with Chrome OS supports to install Android apps. So please make sure you have a compatible Chromebook such as the Google Pixel.

Not all devices with Chrome OS support to install Android apps, so please make sure you have a compatible Chromebook such as the Google Pixel.

Step 2. Search and Install Apple Music for Android app into your Chromebook. It takes a few minutes, please wait for it to complete.

Step 3. Now you can launch the app to access your Apple Music from a Chromebook as you did on your Android and iOS devices.

Part 2. Listen to Apple Music on Chromebook via Web Player

A few months later, Apple has been geared up to compete with Spotify by releasing new features. One of them is to launch the web player for Apple Music. It allows users to listen to Apple Music in the web browser and is compatible with Chromebooks.


Step 2. You can select the country you live and the type of song/album you prefer, then the player main screen will show up.

Step 4. If you want to save the songs for later enjoyment, you can also click the "..." icon to add the playlist to your Apple Music library.

The two solutions mentioned above may not work sometimes because we don't always have Internet access and some Chromebooks just don't compatible with Android apps. So can we transfer Apple Music to Chromebook for offline listening just like the local songs?

Yes, that is possible. You need to get rid of the limitation from Apple Music and convert Apple Music to Chromebook supported files. Ogg, MP3, WAV, and M4A audio files can be recogized by Chromebook directly.

DRmare Audio to Chromebook Converter for Mac/Audio Converter for Windows is specially designed to revert the protection and copy music out of Apple's ecosystem. It lives up to its name of audio converter, which can also convert Apple Music to MP3, FLAC, WAV, and so on. In virtue of this tool, it's easy to play Apple Music on Chromebook.

Someone may wonder if it will break the copyright law. Take it easy. It is totally legal as long as you use the software for personal use. This solution works perfectly from any devices. And it will save your money by getting the songs offline.

How to Use Apple Music on Chromebook

If you have used any other similar media converters before, you will find that the processes to use the DRmare software are extremely the same. I will show you how to use it to download Apple Music to Chromebook.

In order for DRmare software to decrypt your Apple Music songs, you need to download and authorize them to play well on iTunes first. After that, you can click the "Add Files" buttons from the bottom left to import them from the iTunes library or computer folder. Or you can drag and drop them, too.

You can select one of the formats from MP3, M4A, and WAV as you want. All of them should work well with Chromebook as long as you install a powerful media player. To make it easier, I'd suggest you pick up MP3 which is a universal format with the best compatibility.

Please click the "Convert" button from the bottom right of the DRmare main screen. It will export the unprotected music onto the folder you have selected. You can locate Apple Music MP3 files by clicking the 'history' icon. All files can be playable on Chromebook. 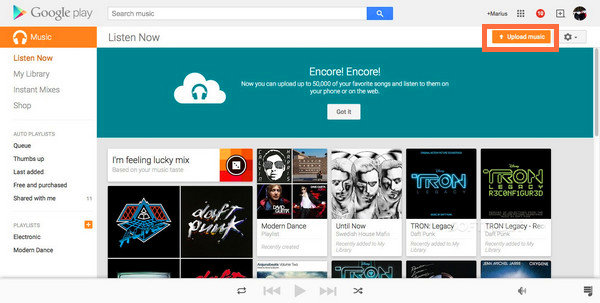 That is it? Have you found out the best solution to listen to Apple Music on Chromebook yet? To solve any problems you may encounter, you can also take a look at the FAQs here.

Can I Use iTunes on My Chromebook?

Unfortunately, you can't download iTunes on your Chrombook. But don't worry. Since iTunes music doesn't have DRM protection, you can move iTunes music to Chromebook directly.


Does a Chromebook Get Viruses?

It won't because you can't run any executable files on Chromebook. For any extensions or apps you installed to it, you can simply remove them.

Chromebook support Google Play Movies & TV, you can click "Download" button beside the movies you want to save them to your library. But for DRM movies, you can follow this guide: How to Play iTunes Movies on Chromebook.


Can I Use Chromebook without Wifi?

Yes, Chromebook runs perfectly with Internet connection. But if you don't have access to the connection, it doesn't matter, there are plenty of apps which can work offline.