How to Play Videos from iTunes on Vizio Smart TV

Q: Recently, I have purchased a Vizio smart TV online, and I can use it to watch movies through many popular applications, but I find that it doesn't support iTunes, in which I have bought varieties of wonderful videos. I have no idea about how to deal with tons of iTunes movies as well as TV shows and only would like to stream to Vizio smart TV for playback with my friends. Much appreciate if anyone can give me a hand to play these wonderful movies from iTunes on Vizio smart TV. 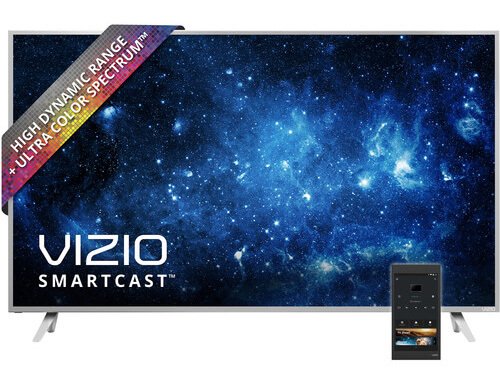 Actually, just like other smart TV, such as Samsung smart TV and more, Vizio TV also doesn't support iTunes digital content for watching directly. In order to make you enjoy digital entertainment more convenient with Vizio smart TV, in this article, we will give a best solution to help you to play iTunes movies and TV shows on Vizio TV.

Although Vizio smart TV allows you to stream thousands of digital content from online streaming services, but it's not compatible with iTunes store. Generally speaking, iTunes rentals and purchases like movies, TV episodes, music videos are encrypted by FairPlay DRM technology, which prevents you from playing them anywhere but on Apple approved devices and players with iTunes-linked Apple ID.

Therefore, if you would like to play DRM movies of iTunes on Vizio smart TV, you must get rid of DRM protection in advance with the help of iTunes DRM removal solution. Here, you will meet DRmare M4V Converter, a powerful and professional to remove DRM protection from iTunes video files.

This tool can convert iTunes M4V videos to common DRM-free formats, including MOV, MP4, AVI, MKV, MPEG, and more. After that you are able to play these iTunes videos on any non-Apple devices according to your needs.

Part 2. How to Get iTunes Videos Stream to Vizio Smart TV

Now, you can follow this detailed guidance to convert iTunes DRM movies and TV episodes to Vizio smart TV for playback. Before converting iTunes videos with DRmare M4V Converter, please make sure that you had downloaded iTunes videos and the videos can be played well on iTunes. Then you also need to download and install DRmare Converter on your computer in advance. After that, you can refer to the steps below and start.

Launch DRmare iTunes Video Converter on your computer and click the "Add Files" tab to choose iTunes DRM videos that you want to convert from iTunes library. Or you can also add wanted iTunes movies to DRmare via drag & drop action.

Tap the "Format" option at the bottom right of the program to choose MP4 as the output format. Certainly, you can choose other formats supported by Vizio as you like. In this step, you can customize the output audio tracks and subtitles for MP4 videos. Also you can skip this step to keep the default.

When all the settings is OK, just touch the "Convert" button and DRmare M4V Converter will convert iTunes DRM videos to common DRM-free MP4 files. And then, you can transfer iTunes unprotected movies to Vizio smart TV for watching.

Beside the above method, there is another direct way for you to play MP4 on Vizio smart TV. You can transfer the converted iTunes videos to your USB from computer and then plug the USB into your Vizio TV, then you can watch iTunes movies with ease.

Taken customers' requirements as a premise, Vizio Inc. creates a series of truly smart and thoughtfully products. Before we get down to talking about the best iTunes to Vizio Converter, let's have a detailed knowledge of special and stunning Vizio smart TV features among these TV series.

M-Series. This TV series are very similar with C-Series in term of performance. Apart from these stunning features, P-Series offers an incomparable sense of depth and reality, since Contrast Control Zones technology is able to optimize across 72 zones alone, which can achieve obvious contrast between bright and dark areas of the image.

D-Series. Just like the tagline of Vizio D-series: Incredible picture, unbeatable value, combining more than 2 million screen pixels, D series can support 1080p Full HD and give you access to a wide range of products at low prices.

Alan Bond is an excellent writer for guiding readers to enjoy iTunes movies and TV shows on Android devices and smart TVs as well as share videos with others online.

iTunes on Vizio Smart TV
DRmare uses cookies to ensure you get the best experience on our website. Learn moreGot It!