Avril Lavigne is a famous Canadian singer, songwriter and actress born in September, 1984. She had appeared on stage with Shania Twain when she was 15. After that, she signed contract with Arista Records and released several studio albums. These albums has 40 million sales and the singles has over 50 million sales, making her the third best selling Canadian female artist of all time.

2015, Avril Lavigne went public with her battle with Lyme disease. For 3 years, she haven't released any new music. Good news is that Avril Lavigne haven't gave up her sixth studio project while battling the illness. The first song of the same title album Head Above Water was released on September 19 and the second song Tell Me It's Over will be out December 12th.

Are you excited about the return of Avril Lavigne? Now let's learn more about her. 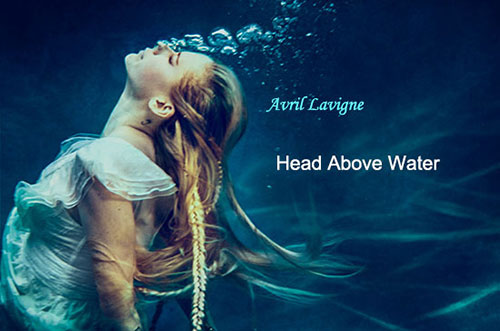 Part 1. What We Know about Head Above Water Album So Far

Avril Lavigne attends the 25th Annual Race To Erase MS Gala at The Bevelry Hilton Hotel on April 20, 2018. On the red carpet, she confirmed to E! News the forthcoming studio album. She got the inspiration when she was lying in bed. "I had accepted death and could feel my body shutting down. I felt like I was drowning. Like I was going under water and I just needed to come up for air," She said. "I've been writing songs that are really just powerful and true and honest and sincere and I think people will really be able to relate to it". Following are the details of the album.

Since bursting onto the scene in 2002 with "Complicated,", Avril Lavigne has released 5 best studio albums and released 18 Hot 100 singles.

Lavigne released Let Go in June 2002 in the US. It reached Billboard 200 albums chart number two in US and number 1 in Canada. It also received 6 times US Platinum sales certifications. The top singles are "Complicated", "Sk8er Boi", "I'm With You". "Complicated" is the first single of the album which makes her deep into the public consciousness.

This is the second studio album released in May 2004. It debuted at number one in many countries including Australia, Canada, Japan, the UK and the US. The album has sold over 10 million copies with the top singles "Don't Tell Me", "My Happy Ending", "Noboday's Home". "Don't Tell Me", the lead single off the album reached the top five in the UK and Canada and the top ten in Australia.

Avril Lavigne's third album The Best Damn Thing was released in April 2007. It debuted at number one on the U.S. Billboard 200. Charting singles are "Girl friend", "When You're Gone", "Hot", "Keep Holding On". Among the singles, "Girl friend" is Lavigne's first and only number 1 hit on the Billboard hot 100.

It was released in March 2011. Goodbye Lullaby received Juno Award nominations for Albums of the Year and Pop Album of the Year. Charting singles are "What the Hell", "Smile", "Wish You Were Here".

The is the self-titled album of Avril Lavigne was released in November 2013. It reached top 20 positions on the Billboard Hot 100. The great songs you shouldn't miss are "Here's to Never Growing Up", "Rock 'n' Roll".

Part 3. How to Listen to and Download Avril Lavigne New Album 2018

Can't wait to listen to Avril Lavigne's new music? No worries. The Head Above Water song and music video is already on Spotify, YouTube and other streaming websites. Just go to YouTube and Spotify and search it. For the second single of the new album, it will be available on Dec. 12th. While waiting for the new songs to be released, you can also stream the best Avril Lavigne songs online such as "Don't Tell Me", "Complicated", "Girl friend".

However, you can't save Avril Lavigne best albums for offline listening unless you have the DRmare Spotify Audio Converter for Windows/Mac. It is a well crafted tool which can download all songs from Spotify while keeping all the ID3 artist info. Now let me show you how does it work.

Launch DRmare software, Spotify desktop client will be opened simultaneously. Just search and locate the songs you want such as "Head Above Water". Then you can drag and drop to add it to the software main screen.

To make sure the output files can be played anywhere freely, we'd highly recommend you to choose the universal format MP3. It supports to work with any devices such as portable speakers, MP3 players or mobile devices.

After that, you can head to the bottom of the software and click "Convert". Within a few minutes, you will get the songs you want quickly. The paid version is for a lifetime use with free update. So no matter what kinds of songs you want, you can download them as long as they are released.

Video Tutorial
For your convenience, you can also watch this quick video tutorial.