How to Make Spotify Mini Player

"Does Spotify have a mini player?" The answer may disappoint you. As for Spotify, it doesn't have a built-in mini player yet. Though Spotify did run a vote for implementing the Spotify mini player, it finally didn't implement it as there were few users vote for it. 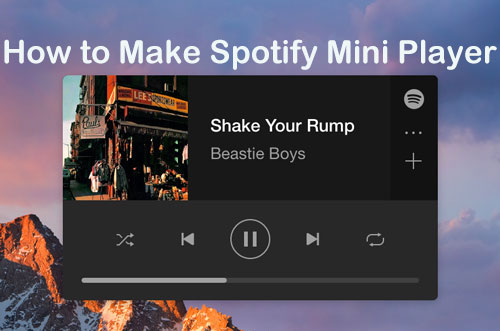 Part 2. How to Get Mini Player for Spotify on Computer

Google Chrome supports to open websites in app mode, so that you can open Spotify app in app mode and resize the window as you like, then you can have your own mini player for Spotify.

Let's see how to make Spotify mini player via Chrome.

Step 1. Open Chrome and go to open.spotify.com to get Spotify web player.

Then the mini player for Spotify with album art pops up. And you can control your Spotify music with it.

Method 2. Get Spotify Mini Player via the Third-party Tools 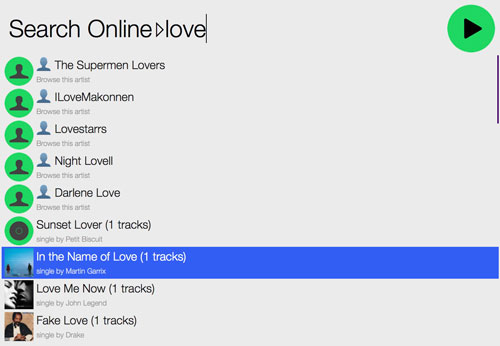 Alfred is one of the popular third-party Spotify players for users. You need to setup the workflow on your Mac or Windows computer. Besides, you may need some times to finish the setup. You can go to the official Alfred Spotify mini player website to download the latest version of it and see how to install it step-by-step.

Spofy is a WPF-based Spotify mini player. It is easy to use. You just need to download and install it on your devices. In addition, it only work on Windows now. And to use Spofy successfully, you are required to have both Spofy and the official Spotify app installed on your computer. With Spofy, you don't need to open Spotify app again and again and enjoy your music easily.

Part 3. How to Make Spotify Mini Player on Android

Now the latest version of Spotify app won't serve as a resizable widget on the Android devices. But please don't worry. Here are two ways for you to get Spotify mini player.

For users who use the latest version of Spotify app on Android device, then you could follow the steps as below.

Step 1. Long-press on the home screen and you can see some options.

Step 2. Hit on Widgets and scroll down to Spotify widget.

Step 3. Long-press the Spotify widget and drag it to the place you want.

Then you can control your Spotify music via the widget on your Android device.

The second way for you is that you can downgrade Spotify app to older version to get the mini player for Spotify, because the older version Spotify app has an in-built option to create a widget. You can download Spotify APK from a third-party website like APKPure, etc. that have Spotify v8.15.16.178 as this version owns this feature.

All the methods we mentioned above have their advantages and disadvantages. And here we should note that you can't avoid ads while using a Spotify mini player with a free Spotify account. Thus, here to fix this issue, we would like to introduce a powerful tool to you.

It is DRmare Spotify Music Converter. This smart tool is designed to convert Spotify music to MP3, WAV, FLAC, M4A, M4B, etc. without losing any original quality. It can keep original audio quality and full ID3 tags after converting. And then you can save Spotify music on your computer for offline playing without ads on your devices.

How to use DRmare Spotify Music Converter

Step 1. Install and launch the DRmare Spotify Music Converter from your computer. Then directly drag and drop your favorite tracks from the displayed Spotify app to DRmare.

Step 2. Touch on the menu icon on DRmare. Then choose the "Preferences" > "Convert" to reset the output settings.

Step 3. Press the "Convert" icon to start the conversion. When the conversion is finished, please locate the local music folder via the 'Converted' button.

For Windows: Open Groove Music and play a converted Spotify song. Then hit on the 'Play in mini view' button to setup the mini player. 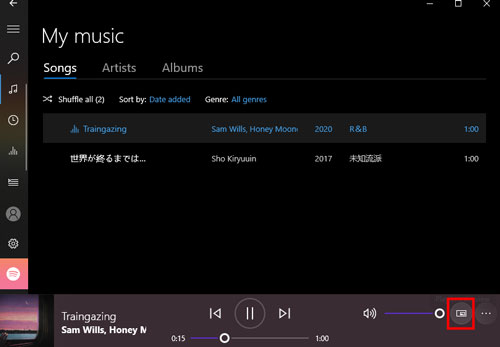 For Mac: Launch iTunes and move converted Spotify music to iTunes Library. Then play the song and move your mouse to the album art and hit on the mini player button.

How to Get Spotify Mini Player