How to Link Spotify to DJUCED [Fixed]

DJUCED is an easy-to-use and free DJ software which provides lots of features like mixing audio tracks, remixing, recording music, etc. And it can work well with both Mac and Windows OS and supports 14 languages. With such powerful features, it is definitely the best choice for those who are eager to be a DJ. In DJUCED program, they can easily and quickly see how things work from DJUCED as it is with user-friendly UI, interactive help, guides system and so on.

But for DJUCED, there is one thing that should be mentioned here. That is, it can't work with Spotify since the DJUCED Spotify Integration hasn't been achieved. So, what to do if you want to put Spotify on DJUCED? Please don't worry. Here we're happy to share a tip with you and show you how to link Spotify to DJUCED. 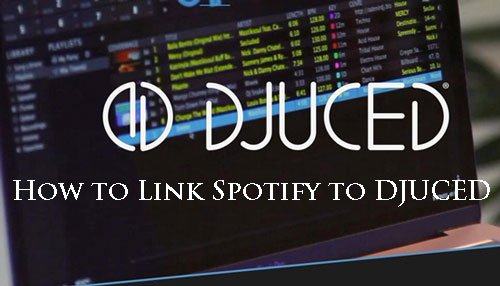 As a large music streaming service, Spotify, however, currently still doesn't work with most devices or platforms, like DJUCED and so on. Besides, with the right protection in Spotify music files, users can't use Spotify music directly and freely even though you can download the music with your premium plan.

Thus, to rip the protection from Spotify and use them on DJUCED, you should need help from a third-party tool. Here we would like to introduce a professional tool for you to fix this issue.

This tool is DRmare Music Converter for Spotify, which can help you get rid of the protection from Spotify playlists and convert the songs to common supported formats like FLAC, AAC, M4A, MP3 and so on. And it can output high audio quality and with full ID3 tags kept. After that, you can use Spotify on DJUCED without any limitation.

Now you could follow us to see how to use DRmare program to convert Spotify music for using on DJUCED.

Please install and open the DRmare Spotify Converter on your computer. Then the Spotify app will launch along with it. Next, go to Spotify app to find the tracks you like to mix on DJUCED. Then copy the link of the track to the search bar of DRmare interface and then click '+' button to load the tracks. Or you can directly drag and drop the track to DRmare and it will import the songs for you.

As DJUCED supports MP3, FLAC and M4A format, here you could choose one of them in DRmare program. Just click on the 'DRmare Spotify Music Converter' from the top left corner of your Mac system. Then choose 'Preferences' and 'Convert' option to set the output audio format for DJUCED. In addition, you could define the channel, bit rate and sample rate of Spotify music files according to your needs.

Touch on the 'Convert' button from the bottom right to start converting. Then you will see the conversion process on the main interface. Once done, you could hit on the 'Converted' button at the bottom bar to check the converted Spotify tracks on your computer.

Now it's time to transfer Spotify to DJUCED for mixing as you had converted Spotify music to DJUCED supported formats. There are two methods for you. Just check how to do.

1. Open DJUCED program on your computer.

2. Find and click the 'Finder' under the 'Library' option from the left side of DJUCED main screen.

3. Transfer Spotify to DJUCED program from your computer.

4. Drag the Spotify tracks to the time line of DJUCED for mixing once they are in DJUCED.

1. Open iTunes and sync Spotify music to your iTunes library.

2. Touch on 'Library' > 'iTunes' on DJUCED and you will see your Spotify music in it.

3. Select Spotify music you want to mix on DJUCED.

Though DJUCED is free to use, you should know more about it before using it. In this part, we will focus on the system it requires to work with.