Q: "I want to add Spotify music to Videopad Video Editor when I work at home. I subscribe to the Spotify premium plan. But I couldn't do it and I have no idea how to figure it out."

Holding a premium Spotify account enables users to listen to the songs without connection. Meanwhile, users can also download the music for playing inside the Spotify app. But you can not upload the songs to Videopad Video Editor because of Spotify's digital right management. So is there any good way to load Spotify music to Videopad Video Editor? Absolutely yes! Just follow us! 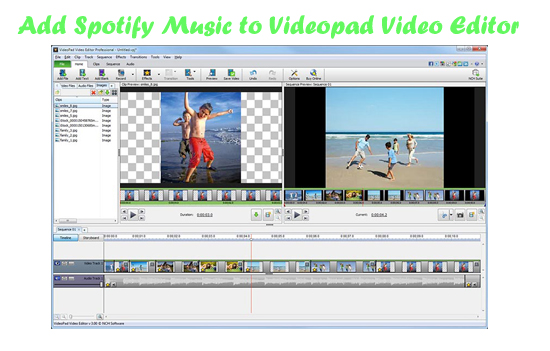 As Spotify provides millions of songs for you, it is definitely a great source for you to make background music for video editing. Videopad Video Editor helps you edit videos with sound effects and transitions, import and mix music, export videos to YouTube or other platforms, etc. Yet if you want to send Spotify music to Videopad Video Editor, you will encounter some difficulties.

As we know, Spotify songs are formed in Ogg Vorbis format. While Videopad Video Editor supports common audio formats like WAV, MP3, M4A, MID, etc. So music from Spotify is not compatible with Videopad Video Editor. Concerning this, you have to change format of Spotify to ordinary ones. Luckily, DRmare Spotify Music Converter is a good assistant. It aims to convert Spotify tracks to MP3, FLAC, AAC, WAV, M4A or M4B files. Therefore, the converted Spotify playlist can be played and edited on Videopad Video Editor.

What's more, DRmare Spotify Songs Converter downloads songs without quality loss while running at 5X faster speed. So you can get the lossless transferred files within a short time. After you convert the songs, you will find that the information of Spotify songs such as title, composer, group, year, genre, album cover and so on are all preserved for you.

Now you can learn how to finish the operation of conversion from Spotify to Videopad Video Editor. Just with a few clicks, you are able to use Spotify tracks for your video editing. Let's go ahead!

No matter your computer operates Win or Mac system, you can use the DRmare Spotify Music Converter on it. Download the DRmare tool from the official website and install it. Then launch it. A clean interface will pop up. Surprisingly, the Spotify app will be opened simultaneously. Then you should pick songs from Spotify for your conversion. And drag them to the conversion window. Or you can paste their links to the search bar after you copy them, and then hit the "+" icon. At last, the Spotify tracks will be sent to the DRmare Spotify to Videopad Video Editor Converter.

Drop your mouse on the "Preference" button on the top right of the window. You can thereby set the output format as you like. The channel, bit rate and sample rate also need you to customize for a better quality of output files. In addition, you are permitted to command the DRmare Videopad Spotify Downloader to run as 1X faster speed so the process will be more stable. If you want to archive the tracks by Album or Artist, just make your choice. Furthermore, tap on the "Converted" icon, you can then reset the output folder. 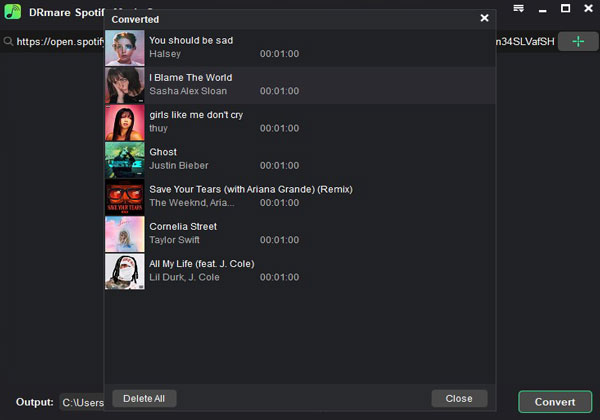 Click the "Convert" button. The conversion between Videopad and Spotify Video Editor will begin. During the process, the Spotify files will be downloaded losslessly with their ID3 tags kept. After a while, you can get the converted Spotify tracks in the output folder. What you should know is that if you use the free trial of DRmare software, you can only be permitted to gain a one-third file of a converted Spotify track. To win a completed converted one, you are supposed to pay for the DRmare Spotify Music Converter.

You can now load the Spotify tracks to Videopad Video Editor. We offer you a guide on it as below.

3. Locate the folder of the converted Spotify music. Hit the "Open" icon to add them to Videopad Video Editor.