How to Import Spotify Music to Camtasia Studio

Watching a video demo is much easier and more engaged compared to text tutorial or any other user manual. If you'd like to create a video tutorial for your customers, Camtasia Studio 9 is the second to none tool. It can record your screen and edit videos clips in an effective way. Besides, the Camtastia music library contains some royalty free sounds. You can add them to your video demo as background music without any problems.

But honestly the free music resources from Camtasia are not enough. A right background song can deliver the message in a better way while a wrong one may have side effects. As the most popular streaming music platform, Spotify owns over 40 million songs. If you could add Spotify music to Camtasia studio, that would be a perfect solution.

View also: How to Add Spotify Music to Video

Part 1. Why You Can't Add Spotify Songs to Camtasia Directly

Nowadays most users prefer to stream music on demand such as Spotify Music, Apple Music, Amazon Unlimited. This is convenient but it also has a problem. You don't really own the music and you can't listen to the songs outside of its original ecosystem or edit the songs on Camtasia or other video editors. If some errors happened or you cancel the subscription, you will lose the privilege to listening the music immediately. Does that mean you need to pay for the songs?

Not really. Instead of spending a large amount of money to buy the songs one by one from iTunes store or local CD shops, there is an ideal way to get Spotify songs free.

By converting Spotify songs, you can add them to a lot of softwares such as VLC player, Windows Media Player, iMovie, Camtasia studio and so on. And it is not difficult at all to do that.

DRmare software is based on Spotify desktop client to run. After launching the two software, you can drag and drop tracks from Spotify to DRmare main screen straightforwardly.

Next, you can click the top menu and choose "Preferences" to go to the settings window. You can select an output format, channel, sample rate, bit rate etc. for your new output files to fit your needs. For the Camtasia Studio 9, you may just keep the default MP3 settings.

After that, you can click "Convert" button. DRmare will remove DRM and convert Spotify OGG to new format of files simultaneously.

Part 3. How to Import Spotify Music to Camtasia 9

Adding a perfect music will definitely make your demo or presentation outstanding. Camtasia Studio has make this task so easy.

Step 1. Launching Camtasia 9, you will see the main screen.

Step 2. You can either open an existing project or click "Record" button to start recording and generate a new project.

Step 4. You can drag the song you want from the Media Bin panel to the Timeline.

Step 5. On the Timeline, you can cut/split/rearrange the audio as you want. 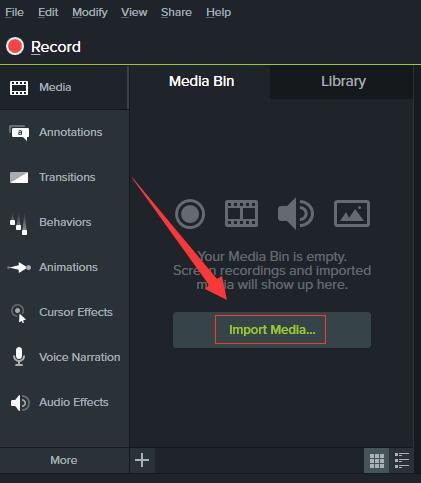 That is all it is to it on adding Spotify to Camtasia. The most import part is to get a special DRM removal tool like DRmare. If you still have any other questions, please don't hesitate to leave comments below.