Samsung Galaxy S8 vs. Galaxy S8 Plus: Which One to Buy

On March 29 of this year, Samsung unveiled two new flagship phones, the Samsung Galaxy S8 and the larger counterpart Samsung Galaxy S8 Plus. Compared to the predecessor version Galaxy S7 and the S7 Edge, the S8 and S8+ contain some upgraded hardware and major design changes such as taller aspect ratio, iris and face recognization, a new virtual assistant known as Bixby and son on.

Both are visually stunning phones which received numerous positive reviews from customers. However, they are so identical with the same curved screens that many customers find it difficult to tell which one is better. If you are interested in the Galaxy S8 and S8+ too, please follow me in this post to find out the detailed differences. 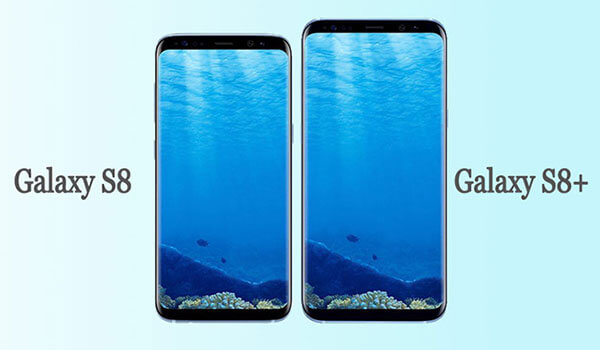 Before starting, let's take a look at the tech specs between S8 and S8+ to get an overview of the two phones. From the list, you can see that S8 and S8 Plus are very similar in the parameters.

From the tech spec list, we can find that there are only a few slight differences between the screen size, battery and so on. Here I will get into the details of S8 and S8+ to learn more.

Galaxy S8 and S8+ are not only known as the best looking phones but also crafted with the finest display 2960*1440 pixels resolution super AMOLED screen with 18.5:9 aspect ratio. Galaxy S8 has a 5.8 inch screen while the S8 Plus is 6.2 inch, so the pixel density of S8 is a little bit lower than the S8 lower than the S8+. However, you won't notice the difference by eye. In general, the color is gloriously vivid and it covers DCI-P3 cinema-grade colour gamut for a much wider spectrum of color like the iPhone 7. In addition, it supports HDR feature with the 'Video Enhancer' mode, which boosts the contrast and brightness in some video streaming apps like Netflix, Prime Video, YouTube and so on.

Though S8 and S8+ have big screens like other phablet phones, the size is not so big as you might image because Samsung has optimized the screens with almost no frames or bezels. The dimension of Galaxy S8 is 148.9x68.1x8 mm with 155g weight and the S8 Plus is 159.5x73.4x8.1 mm with 173g. The two phones are same in thickness. But as the S8+ is bigger, so it can be integrated with a bigger battery 3500 mAh. The S8 still has the same 3000mAh batter like the previous Galaxy S7. According to the test, the battery of Galaxy S8 Plus can last longer than the S8's.

Samsung Galaxy S8 and S8 Plus are stunning phones, but the price is remarkably high. Samsung has raising the price for its high-end phones in the recent years. The Galaxy S8 price in US is $750 and the Galaxy S8 Plus is $850. That is way too high for some users to afford as it is even higher than the price of iPhone 7 and iPhone 7 Plus. There are some variation phones exist with different prices from AT&T, T-Mobile and so on.

Except the 3 main differences above, the Galaxy S8 and S8 Plus are same in many aspects such as the cutting edge chipsets like Octa-core Qualcomm Snapdragon 835 or Octa-core Samsung Exynos 8895, Dual Pixel 12MP Camera with OIS and F1.7 aperture that can take 4K videos. What is more, the two phones support the same sensors like Accelerometer, Barometer, Fingerprint Sensor, Gyro Sensor, Geomagnetic Sensor, Hall Sensor etc.

Of course, there may still be more detailed differences between S8 and S8 Plus. But both are really attractive phones though they are at a high price. It is really difficult to decide which one to buy since it is partially depends on user's preferences. In my opinion. If you mainly use it at home such as you want to use it for enjoying videos, playing games, the S8 Plus should meet your needs better since it offers a longer battery endurance and watching experience. Else if you want to use it outside all the time, the S8 may fit you better as it is easier for single-handed operation. What I can say here is that both are good for gaming, watching videos especially the HDR videos, you won't regret in buying either one. Finally, there is still one tiny thing noteworthy to mention that S8 and S8+ don't support the iTunes purchased and rental movies which are DRM protected. If you are a regular iTunes users who want to play iTunes videos on Galaxy S8, you can try to use a handy tool DRmare M4V Converter to help you erase all the DRM protection. The DRmare M4V Converter is well-crafted with a 30X faster converting speed and lossless output video quality. To find out more details about playing videos on Galaxy S8, you can visit: How to Transfer iTunes Movies to Galaxy S8 for Playback.

Difference between Galaxy S8 and S8+